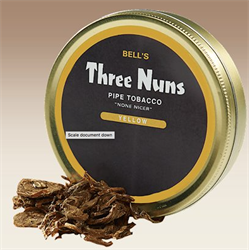 Three Nuns Yellow consists of first class Virginia tobacco from all over the world. It's produced according to old English tradition and offers a natural sweetness from the Virginias. Only hand picked Virginia leafs are used as wrapper leafs for this mixture.

The lightly grassy, tart and tangy citrusy, slightly hay-like, bready, gently floral golden brown Virginia is the lead component, and also sports the slightest hint of honey possible. The tangy dark fruity, very earthy, woody dark Virginia is a tad more than a condiment, and has a touch of fermentation. In the background is a small portion of a woody, lightly spicy, dry, vegetative, floral, earthy tobacco that tastes like an Oriental, though it's a Virginia. The strength is a step or two past the mild level, and the taste is in the center of mild to medium. The nic-hit is mild. Won’t bite or get harsh even when pushed, and has a very consistent, comfortable smooth sweetness, without being overly sweet. The tobacco is lightly moist, and the coins easily break apart to suit your preference. There’s some loose cut in the mix as well. Burns cool and clean at a reasonable pace, and easily burns to ash. Leaves little dampness in the bowl, and requires just a few more than an average number of relights. Has a pleasant, short lived after taste and room note. By design, it’s a milder Virginia blend with a twist than some others on the market, and though it’s not complex, it makes for a easy going all day smoke. In the category of mild Virginias, it gets four stars.

I reviewed Three Nuns Green a few months ago, found it nice, but not fabulous. So, Three Nuns Yellow? Let's see:

A mixture of both coins and ribbons, with there being more intact coins than ribbons. They're medium brown with some lighter birds eye flecks in them. The moisture of this tin could have been higher, it arrived slightly dry to the touch. Because of the coins being a little under-hydrated a bowl can be readied without needing too studious a hand.

The smoke: the Virginia's don't taste as opulent, or sweet/sticky as can often be the case. They seem to be dryer, and have a more austere character: slightly rugged, with more hay than sweetness. Throughout a bowl the flavour isn't particularly peripatetic, fluctuating or meandering, but is undeviating: from start to finish I notice little change; it maybe develops some depth, but we're not talking about anything profound. The burn, as expected, can be a little quick because of the hydration being too low. I get zero bite.

Nicotine: below medium. Room-note: not the best.

I’m reviewing both Three Nun’s Yellow and Green because I bought them simultaneously to compare. Both were smoked in a variety of pipes (hand carved, cobs, thick, thin, small and large) and in a variety of methods (sitting/tasting, while walking, while doing yard work). Based on all of those criteria, here are my reviews.

Three Nun’s Yellow Described as a Straight Virginia - this one meets the mark.

Packaging: Like the other Three Nun’s in the family, this tobacco looks like it was packed in haste. Opening the round tin, I found loosely packed irregular coins haphazardly mixed with ribbons of tobacco. Moisture content on the other hand is perfect and smokable right out of the tin. Regardless, I transferred into a rubber sealed jar and let the tobacco breathe for a day before smoking.

Strength: I found the nicotine content to be mild on this tobacco.

Tin Note: The aroma from the tin could be described as wet hay with maybe a subtle sweetness.

Flavoring/Taste: Great sweet Virginia tobacco throughout the whole bowl. No bite as I walked and puffed this one.

Room Note: Not as strong as 3N Green, but this is still an outdoor tobacco in my household. Not as strong, but still not an overwhelming sweet tobacco that folks around me love.

OVERALL: Considering that I love sweet Virginia tobaccos, when I compare 3NY to the other tobaccos in the family, I’d put this in first place.

I love this blend. When I was purchasing this from my local pipeshop, the seller laughed this off as a "aromatized air", but I do not agree. I smoke pipe for only few years, with filter, and for me, this has everything that a great straightVA should have. And I do have a comparison of SG FVF. This is a bit lighter, of course, but that makes me happy, because I can smoke it without fear of nic-poisoning my head, and it still has many tasty aromas and tastes. There's hay, lemonny aroma, wodiness, dryness, all nice and satisfying. Burns realy nicely too. You can fill it in a pipe with almost any method and it works.

I usually don't like McBaren stuff, but this one made me reconsider giving McB another chance :) Will definitely buy more.

Age When Smoked: 1yo

It is a Curly Cut like the original Three Nuns red label. Loose spun curly cut discs in the size of small coins. The moisture in tin is ok to smoke right out of the tin, although it’s on the drier side. After opening the tin, I should keep it under some moisture to prevent further drying.

Three Nuns Yellow (3NY) is an honest Virginia blend, rather on the side of bright Virginias than matured ones. I can easily taste all of the typical natural flavours of Virginia tobacco. It opens with citrus and hay, then gradually gets into the bread and yeast aromas. Some sweetness is there, but I would say it is limited to the natural Virginia sweetness. I cannot detect any added artificial sweetness or flavouring. In my perception there must be a hint of peppery Perique in this mixture, providing an extra boost of strength that a regular straight Virginia would not have. A slight nose-tingle on retro-hale confirms it. Because of this extra peppery power I rate the strength medium to strong.

3NY offers a rather quick but steady burn and a consistent, non-fluctuating deployment of the aromas from start to the end, leaving a dry ash. The nicotine level is low. Overall 3NY it is a delightful Virginia blend. Not one that is deep digging. Rather an enjoyable all-day smoke. No problem to smoke several bowls in a row. I feel no bite whatsoever. It leaves a pleasant after taste.

I picked up a tin of the new Yellow and the new Green to try.

I popped the Yellow one first as it was said it was the milder of the two.

Presentation: Very small coins. Much smaller than LBF or the other coins I'm used to. The tin is tightly packed when opened. Tin note was fairly sweet and had a prevalent hay smell.

Prep: The moisture seems about perfect straight from the tin. I took two coins and folded them into a smaller Blue Room Briars Canadian.

Lighting: Char light, tamp, and then one light got me through the bowl.

Taste: start out sweet at the light with a pretty light taste from the virginias. Mid way through I got a little bit of spiciness. Not overpowering at at all to my taste. More Nic in the 2nd half of the bowl but not so powerful to be annoying or overpowering.

Burn: A little bit hot in the bowl, but in the small Canadian never required a relight. Burned down to ash with minimal moisture in the bowl.

Overall impression: The small coins provide an interesting presentation. The flavor is good. Not sure it will make it to my rotation, but an overall good experience that I'd recommend you try. I preferred the new Green to the Yellow.

I'm going to jar the rest of the tin and I'll update if the taste changes with some aging.

Age When Smoked: Fresh from Tin.

Small coins and ribbons were a bit dry right from the tin but easy to fold and pack which is my normal technique for flakes. Uniform, grassy taste throughout the bowl but lacks the sweetness that I prefer. Smokes hot in the bottom 1/2 of the bowl but without bite. Relatively low in nicotine content.

Taste is fine. Grassy, hint of vanilla on first lights which is probably a small amount of latakia added. I seem to taste dark twist, HH virginia and at times even virginia number one elements. I like it. Its tasty and up my alley. However, after 10 minutes this tobacco turns to shit burning hot and wet. Ive tried everything to negate that aspect but havent succeeded. So its ok in a small pipe if you reload every 10 minutes but anything more than that 10 minutes and itll burn your tongue like no other tobacco ive ever tried.

Nice creamy flavor after opening the sample appears. Coin cut should be rather called broken coins. Tobacco was drier than I used to pack to my pipes, which cased hot bowls sometimes. But no tongue bite. It needs only few relights. Taste was very simple for me. Virginia was less sweeter, creamy, earthy sometimes sour. Aroma was very pleasant (at least for me) Definitely some kind of creamy toping on top. Overall, I can recommend better VA out there.