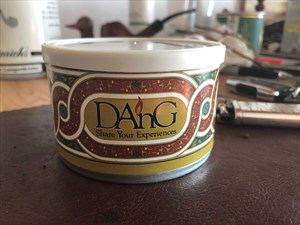 Made of the finest red & bright Virginias, a pinch of extraordinary Izmir Oriental for spice, pressed & cut into flakes, with a hint of burley to shut that one guy up.

Notes: This was produced as a tobacco of the year for a now defunct pipe forum called DANG (Dottle, Ash n Grounds).

The tangy dark fruity, earthy, woody red Virginia is the lead component, though the “pinch” of woody, floral, dry, earthy, spicy Izmir plays above the level of its reported content in this blend. It’s virtually a secondary player; a little more than a condiment. The very citrusy, grassy bright Virginia offers a strong support role. The nutty, earthy, dry, woody burley lurks in the background. The strength is just shy of the center of mild to medium, while the taste is in the dead center of that mark. The nic-hit is almost at the same threshold the strength is. Won’t bite. Burns cool and clean at a slightly slow pace due to the cut of the tobacco, and has a very consistent flavor all the way to the finish line. Leaves little moisture in the bowl. Requires a few relights. Has a slightly lingering, pleasant after taste. Can be an all day smoke. Three and a half stars.

As this was a private blend made for a defunct pipe group, I did not load this blend for review back in 2009, since the group was small and I figured only members would have it. Since it's been reviewed recently, I'll add a small tidbit. The Dottle Ash and Grounds group was made up of a small batch of Puff.com (which,I think started as Club Stogie, or some such) and was by invitation only. I guess they stumbled upon me because they were hurting for new member! :) At any rate, I joined just as this blend was going into production. I ended up buying about 20 tins or so. The DAnG group is no longer, having given up the ghost about 3-4 years ago. I've smoked about 4 tins over the years, the most recent being finished about a week ago.

The predominant taste is the earthy grassy tangy creamy red Virginia with the citrusy grassy lemon Virginia to the rear and providing some additional sweetness. The woody spicy floraly earthy Izmir is the second voice and provides a musty, buttery essence that nearly subrogates the nutty, toasty, earthy, molasses-sweet burley into oblivion. It's white burley, so it's flavor is on the lighter side but is noticeable on occasion. As stated, it was included "just to shut that one guy up", that "one guy" being a member that was always touting burley as the best tobacco strain to ever live. I can tease him in absentia just for fun, but it was he who first turned me on to Stonehaven and implored me to dry it to crispy before smoking (bless you, Evan!). :) At any rate, this blend has aged very nicely and C&D's normally heavy, almost burley-ish Virginias have sweetened up a bit. Oddly enough, the Izmir seems heavier than I recall. It's almost peppery, with a hint of leathery dark fruit. The taste is closing in on "full" and the nic hit is on the higher side. Finally, don't smoke this around friends you want to impress, as they'll be running for the nearest door or window! You probably won't find any of this, but if you do, give it a whirl. If you decide you really enjoy it, give me a holler and perhaps we can do some horse trading!

I was gratefully gifted a tin of this from a former member of this group, and at 9 yrs old, it seemed ripe for popping. The blend is in flake form that easily crumble. The age had done well to the appearance as plume in the flakes gave them a grayish tone.

The taste was nice. Similar to C&D's Super Balkan, but heavier on the Virginia and lighter on the burley. This is a pretty enjoyable blend to smoke. There is a nice back and forth of sweet and sour between the Virginia and the Izmir all the while the burley adds body to the background.

As for performance, this packs great, easily takes a light, doesn't bite at all and does provide a decent nicotine hit. If this was still available, I would buy more. three stars.