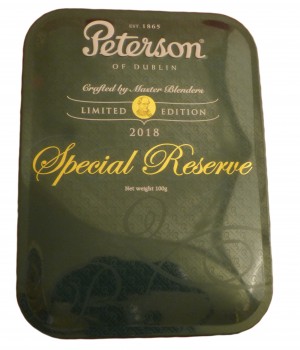 For the first time Peterson presents a Luxury-Roll-Cut-Flake-Tobacco as a limited edition, which is pressed and cut from hand by experts. Virginia and Kentucky tobaccos combined make for a natural mixture that lovers of pure pipe pleasure will appreciate.

The first Limited Edition / Anniversary blend that isn't an aromatic and therefore appealed to me. My anticipation peaked when I saw it was a Virginia/Kentucky blend and as the icing on the cake a Curly Cut!

I suppose Mac Baren produces this tobacco for Peterson, as the Curlys are exactly the size and shape of the Mac Baren Roll Cake series. Inside the very classy tin (which isn't vaccum sealed, so jar it up as soon as you get it!) the curlys are of perfect moisture for my taste and have a verysimilar tin note to the Mac Baren Curlys (Roll Cakes). Rich aroma of bread is dominating, but it also clearly has a very mild honey topping or casing which isn't too distracting from the tobaccos themselves.

The delightful looking curlies all have small "bird-eyes" spun into them, which make for a bright contrast to the red-brown and darkbrown to black melange of (red?) Virginias and Kentucky. Once loaded into your pipe the typical, very bready (think wholerye and dark bread) aroma - that also characterizes the Mac Baren Roll Cakes - is dominating all the way. Quickly a tart, almost peppery spice joins in, which leads me to believe some of the Kentucky may be dark fired. The slight smokiness supports my assumption. The exceptionally mild honey topping is far, far in the background and only supports the caramel-y sweetness and mild hints of stoved fruits from the first class Virginias. Special Reserve 2018 also offers some nice, earthy and tart notes in the background that flatter the insanely rich bready aroma, as well as some hints of sweet nuts.

Not much more to say after the great review by Deniz'! I'll try not to repeat him!

With certain blends, strong aromatics, straight Virginias, steadfast VaPers, I don't believe it takes long to be able to form enough of an opinion to be in a position to post a reliable review. Often I feel a review is of more use to others if posted before too much personal subjectivity has entered the scene. But when I bought this, about a month ago, and had smoked only a small amount, I thought this is a blend which requires a fair few smokes to form an opinion. After a good amount here's my view:

Aesthetically pleasing with a perfect amount of moisture. The coins look like a larger version of those in Cabbies Mixture but the tin doesn't include many ribbon like pieces which have broken away from the coins and can be used for a 'quick fill'. About 95% of Ltd. 2018 is in whole coins which need rubbing/folding. I loved my first bowl of it and that feeling hasn't waned.

It doesn't take much skill to initiate a burn and then, for the duration, it's a steady, consistent and even affair. The flavour's lovely. Running the show is a doughy/bready flavour, with a tangy spiciness in a support role. It isn't an overly fire cured tasting Kentucky. The Virginias give a touch of sweetness and a breeze of grass. The gentle honey topping is present but not overwhelming. I can smoke bowl after bowl, in rapid succession, and NEVER get bitten.

Well, after only a few bowls I ordered more to cellar and I believe that gives some credibility to my four star rating!

Received a tin of this delightful tobacco as a Christmas gift from my brother. It's now the 6th of Feb and I'm going to have to order more.

If that opening shot didn't make it clear: this is a fantastic tobacco. A mild, easy, pleasurable smoke from start to finish, with flavours of sweet Virginia and milder notes of nutty Burley. The honey is very mild, more noticeable to me in the tin note than when smoking.

I jarred it a couple of days after opening and over the course of the last month it's only gotten better. Like all Peterson limited editions, this one didn't come vacuum sealed, so getting it in a jar is a good idea (unless you're going to smoke even faster than I have!).

Doesn't bite, although as is typical with Virginia-forward blends the flavours will turn to hot air and ash if you puff on it like it'll cure cancer. Sip it slowly--or even slightly faster--and it'll please nicely. Definitely an all day smoke, although I've been particularly enjoying it first thing in the morning, with or without coffee.

Age When Smoked: New to one month

A mild blend that goes very well with a cup of coffee in the morning. Limited editions are mostly aromatics but Peterson dared to do something different this time; a natural tobacco without toppings. If you get your hands on a tin you might need to moisten the tobacco first as the tins aren't sold airtight.

a very mellow and light blend with only some very subtle hints of honey flavouring. very suitable for lovers of english mixtures who want to smoke a light aromatic tobacco here and there. Also an excellent after lunch smoke.

the ribbon cut is very uniform and burns moderately cold and evenly when packed right, i personally use a 2-step cannonball method for packing this tobacco

Age When Smoked: about 4 months

I must admit this is the only Peterson that I did not like. Very very dry in my opinion despite being brand new. Not much taste or flavour either

The 2018 packaging is a bit different than previous ones. The manufacturer drew conclusions about leaky jars-boxes and, wanting to keep some moisture in the tobacco, additionally packed the box of dark green color in a box of the same color and design. But it didn't help much - I had to keep the tobacco for a few more days before it could be smoked. And then the first difference from previous years awaited me. The tobacco was cut in neat "pennies," which were very similar to Mac Baren's roll cake. Very smooth, millimeter-thick, milk chocolate-colored, with a splash of light yellow Virginia.

That's where the second distinction comes in. The composition of the blend is Virginia and Burley. No Cavendish. And, as it immediately struck me, a minimum of flavoring. The tobacco smells like rye bread, figs, and bitter chocolate with salt. The honey stated in the flavoring had either weathered out in a couple or three years, or, more likely, was added in extremely small doses, as it was in the very background and was almost unnoticeable. I moistened it, and checked the flavor every day, but the flavoring hardly increased.

It became clear that an aromatic tobacco pipe would not work for this blend. I took a well-rested Virginia pipe, filled it with tobacco, kneaded the "pennies," and lit it. Rye bread, a bit of dried fruit, a slight earthiness, and some sweet grass. That was it. There was nothing in the tobacco that would allow you to consider it a flavor. There was almost no strength in the tobacco either, despite the claimed composition. The tobacco was a little harsh, but by the middle of the pipe it became softer, although the strength did not increase. The tobacco doesn't leave a bright aftertaste either. Smouldering is slow, even and cool, there's no moisture, the ash is even, light gray in color, it's not much - the tobacco burns well.

The smoke is light, sweet and breezy, and wears off almost immediately.

What is the result? A very strange tobacco. Fans of Virginia-Burley blends will probably find it lacking in strength, and lovers of flavors will find it lacking in Cavendish and aromatic flavors. It's hard to say who this blend was made for. Perhaps if it had been packaged hermetically - after five or even ten years, it would have been quite interesting. But the manufacturer didn't leave us a chance to find out.

Simple but brilliant. That's how I describe this baccy.

Sweet and sour in perfect balance, little bit of stone fruit on the sour notes. A little bit of breadyness and slight spice. All with a wispy and delicate natural honey taste that comes and goes.

Nicotine is non existant but it really doesn't need to be. It makes this blend perfect for any time of the day. Only issue is the tins really need to be vacuum sealed. Come on Peterson, just do it.

Age When Smoked: At least a year.