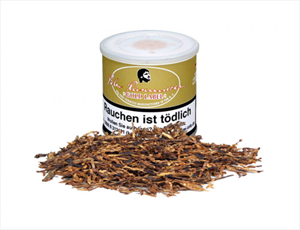 A wholegrain mixture of various bright Virginia varieties, matured in the press and chopped ready for smoking.

A pinch of black cavendish and a subtle flavor composition round off the natural sweet taste and ensure the fine, fragrant redolence.

Also my first ever can. Pop the plastic top off and peel back the foil to reveal very tasty looking, quite rough-cut strands/broken flake pieces. The smell is incredible. I was a little concerned because it was reminiscent of some Dunhill blends that had an amazing aroma but were otherwise tasteless.

This aroma was a heady mix of cream/honey which made it smell more akin to a sweet pudding than tobacco. This top scent burns off very quickly and is present only in the first couple of mouthfuls, and then becomes the virginia we know and love.

It's not as tasteless as say, Kriswills or Choo Choo Train, but doesn't hit the heights of Capstan's wonderful Navy Cut or Gawith's brilliant Golden Glow. It's somewhere in the middle with a subtle undertone of toffee within the natural sweetness of the virginia. I'm not entirely convinced this is purely virginia with a little cavendish, either. No, I suspect there's something else been added like a bit of burley or even kentucky, though it could well be a left-over from the topping.

There's certainly nothing untoward about this blend, yet at the same time the nuances are so subtle, it's easy to categorise this just above amongst the other Dan Tobacco blends of this type.

The can aroma would scare off a lot of non-aromatic smokers at the outset and the looseness of the cut might displease flake smoker purists. Well worth trying and a worthy addition to your collection.

Update/Footnote 2nd can. The smell emmanates from the container as before, although it's taken on a decidedly acidic taste. The colour is different too. Before the tobacco had golden hue, with, yes, broken lumps of flake that were soft and pliable ; easy to break up. Now the tobacco is darkish brown and consisting of almost all broken flake that is hard, slightly sticky that defies all attempts to burn properly and enjoyably. When you finally get it going it brings in far more of the topping that created the opening aroma and it tastes like an Italian aromatic.

I don't know what's happened here, either my previous report was in error or not subjective enough but this just isn't the same tobacco blend I reviewed back in March 2018. Even the can is a different colour grey as opposed to gold, seemingly mirroring the strange concoction within. It isn't the same blend I tried before.

So, I'm at a loss. I'm leaving the scores as they were before, but without the virginia reference that doesn't apply now. This is now just a cheap aromatic, that I won't buy again. Sorry Dan Tobacco this is a poor show.