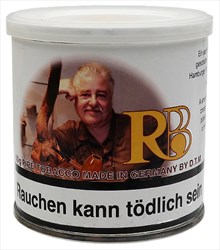 Firstly, it isn't a ribbon, it's a coarse cut/mixture; some cubes, chunks, as well as large ribbons. The aroma's sweet, and a little rustic. On the low side mine arrived a touch too dry. It's made up mostly of browns, dark and medium, with a few specks of yellow.

When I first lit a bowl I was impressed. But, a quarter in I felt the bite! That aside, the flavour's nice. Sweet, but not 'sticky'. The cavendish supersedes the Virginia, so don't expect a 'grass-fest'! Although the Cav' rules, it isn't a heavy flavour; quite sprightly! There's just enough caramel to embellish the natural sweetness, without causing it to be gloopy. Again, on the low side, it takes on a 'dusty' flavour toward the end; this reduces the rating. I'm not impressed by the speed, either, and it can creep high in temperature.

Nicotine: below medium. Room-note: not great.

This tobacco perplexes me. It’s not really aromatic at all yet not just plain tobacco. The tin note to me is of unsweetened cocoa powder. They say caramel but I detect no caramel? It also has a light spice to it and a cigar like note that pops up every so often. It’s some type of in-between tobacco that is neither aromatic or not. The room note is a little stale sweet and not particularly good or bad. It’s honestly hard for me to form an opinion on it besides that I don’t particularly enjoy it and I don’t really dislike it. It’s at least quality tobacco although I’m fairly sure there was a complete tobacco stem in my tin. Definitely expected better from DTM and I will not purchase it again. If there was pipe tobacco in purgatory this might be it.

Yes, mine arrived dryer than a teenagers toothbrush as well.

Decanted and revived it gives off a sweetish caramel/toffee aroma that is very inviting. The cut is quite coarse and very dark in colour, shot through with a lighter brown.

The smoke is flavoursome at first, with caramel/nuts/chocloate/honey to the fore, but this dies away quite quickly, leaving the lightest of traces of the opening taste.

It burns down quickly as well, but I was ready for any bite and found that a good steady pace in a large meer produced reasonable results.

It's not the best RB blend I've ever had, nor is it the worst. An all day blend? Certainly. All week ? No.

Glad I tried it prior to reading the "BROBS" review of this product... with appropriate regard for difference of pipe smoker taste preference of course. I found the subtle "fruit" (plumb? pear?) overtones sublime -- albeit not entirely consistent with each and every pipeful. Its moisture level is good: minimal re-lights, but satisfactorily cool-smoking. Medium-to-mild in character/strength; favorable "room note" and ambience; best smoked not too quickly... even if it means an additional re-light or two. In all, one of my personal favorite and most distinctively pleasant pipe tobaccos, particularly in the morning, but great ANY time. And yes: "thoughtful" too... in the best sense of the word. The only criticisms I have are: 1) It burns ju-u-u-ust a tad too fast; and b) I would prefer to have this pipe tobacco available in BULK. If there is any brand resembling (or a "match" of) this tobacco, I'd surely want to know... and where it would be available, as well as its combination/proportion of tobaccos.

Having been in the packaging and marketing business, I know that often 75-90+% of product price is often due to packaging or container, product processing, labeling costs (including design, artwork, lettering, etc.)... as well as marketing, advertising and other overhead. This metal can however, is a much more practical container than the usual "shoe polish" size pipe tobacco enclosure. BRAVO!

Similar Blends: English, sort-of; aromatic, but not primarily "sweet" such as those quasi-"FannieMae" Cherry-flavored tobaccos: YECH!.