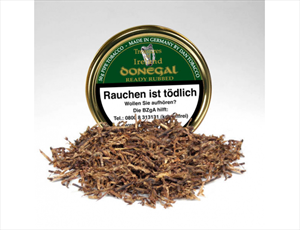 The third blend I got to smoke from the Treasures of Ireland Series. A great series by DTM, Killarney and Limerick are great. Donegal is a bit different, as it's aromatized.

The tins are beautiful and classy... small in diameter (approx. 2/3 of the usual tin size) and are of sturdy, thick metal Donegal's design is neat and intriguing to me. Inside there's the typical cover-sheet with the compass on it. Ready rubbed tobaccos of mostly brown color, with some black and bright parts inbetween.

Tin note is different than I expected it to be. Clearly aromatized and certainly not only cased, as they claim, the flavoring reminds me a lot of Vauens TAB150. Honey, fresh and juicy fruits, something alcohol-ish, maybe wine more so a fruity liquor or Brandy. Not really too much tobacco aroma to detect here. Comes perfectly conditioned tho, not wet at all it's crispy and ready to smoke right away from the cracked tin. A good sign for me, that this tobacco isn't overly sauced.

In the pipe the flavoring is very apparent, but not obtrusive. Though I tend to call this an aromatic blend, more than a "Semi-Aromatic" one. The flavoring dominates with its frehs fruitiness, underlying honey-ish sweetness and a touch of fruity-liquor to it. The Burleys make their presence more known than the Virginias, lending the blend a nutty, slightly earthy and decently spicy backbone. The Virginias sport a minor citrusy aroma and maybe a whiff of grass and hay. Has a slight toasty-dimension to it, whilst having a creamy mouthfeel.

Quite palatable, fans of aromatic tobaccos will love this, of that I'm sure. For me as a smoker that prefers unflavore tobaccos, this a bit too much flavored - yet it isn't drowned in flavoring! The flavoring is skillfully applied, to leave some room for the tobaccos, without being too sweet or goopy. Still this is more for the "Aromatic-Guys" imho, even tho it's a neat little treat for times I get a sweet tooth.

Not bad at all! 3/4 stars, might even be 4 star worty for some aromatic lovers, as it's a high-quality aromatic tobacco.

I had purchased this tobacco without being able to gather much information. Knowing it would be a shot in the dark, I only acquired 4 tins. The tobacco is a combination of Ribbon cut Virginias, Burleys and some Black Cavendish. There is a bit of flake cut throughout. The tin aroma is definitively vanilla and something fruity. It's very nice and soft, mild to the nose and not chemical in nature. The tobacco was low in moisture and ready to smoke right upon opening. The result is a mild in nicotine and pleasant smoking experience that leaves the bowl dry and makes me want some more. Donegal's casing does sublimate the tobacco taste but it's so delightful that it's worth trying it. As my shot in the dark turned to be a Bull's Eye, I will buy again if I can acquire some.

Quite a coarse ribbon, my tin contains a few identifiable pieces of broken flake. There's a higher proportion of Cavendish and Virginia compared to black Cavendish and the aroma from the tin is fruity and sharp. My moisture looked good to go straight away.

Donegal lights easily, and gives quite an unusual smoke. The toppings beat the tobaccos to the finish line, but aren't my sort of 'thing'; fruity, sharp, slightly sweet. As anticipated from the appearance, black Cavendish generates the least flavour, the VaCav side gives far more. It burns nicely, but creates rancour to my palate with bite.

Dan Tobacco Donegal? Not one for me, albeit better than one star. Somewhat recommended:

The 50 gram bag had a 2017 excise stamp, although the tobacco warnings are more recent, after 2018. From this we can conclude that the tobacco had been in the bag for 3-4 years.

The appearance is a shallow, ribbon-like cut. The tobacco is generally an even rye color, with flecks of lighter Virginia. The tobacco didn't dry out over the time in the bag, but there was some tobacco dust in it, once again pointing to the fact that DTM doesn't take the best for its bag.

The flavor is primarily the aromatization, pungent enough to be considered artificial. On the background of the citrus-plum duo, the alcoholic note stands out brightly, the spice in which gives reason to consider it rum. The flavor of honey is also present, smoothing out the harshness of the alcohol a bit. The tobacco's own smells are almost incapable of breaking through the flavoring, but I did manage to catch the hay and wheat bread from the Virginia.

The taste of the tobacco does not match the flavor at all. It has obvious bread and woody notes in the first place, with support in the form of malt flavor and a slight earthiness. The sweetly fruity flavor of Cavendish does not appear until the second third of the pipe. The tobacco is a little harsh, it tends to bite when you take a little longer puffs, and it doesn't get softer as you smoke, though it stopped biting by the end of the pipe. At the same time, it's light enough without the threat of nicotine kick, which encourages you to take a deeper puff. There was a lot of moisture in the tobacco, I began to pour it out of the mouthpiece after the first five puffs, but still forced myself to finish the pipe without using a filter. The tobacco smokes medium-hot, leaving a light fine ash with dark flecks. The aftertaste is fruity and nutty, not pronounced.

The smoke from the tobacco has a mild odor, similar to the smell of fruit liquor. It is light and unobtrusive.

Bottom line: light and fairly impersonal, tastes a little harsh tobacco with a bright smell. Perhaps if I smoked it in a pipe with a P-Lip mouthpiece, it wouldn't bite as much. But the idea that instead of enjoying the taste, you have to control the speed and depth of the puff is disappointing to me.