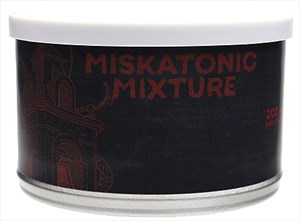 Amidst the old tomes in a remote corner of the library, you discover an obscure reference to an occult recipe: a pinch of granulated perique over a bed of Katerini and Virginia, finished with a dash of sweet black cavendish to cure the madness.

The mildly smoky, woody, earthy, buttery sweet and sour, herbal, lightly spicy and floral Katerini is the lead component. The tangy dark fruity, earthy, woody red Virginia is a supporting player. The raisin and plum from the granulated perique is a little more obvious than the mild spice. This varietal is an ever present in the background. The brown sugary black cavendish adds a light smoothness to the mix. The strength is just shy of the center of mild to medium, while the taste is a step past that. The nic-hit is mild. No chance of bite or harshness, and has no rough edges. The tobacco is a little moist in the tin, but I did not dry it. Burns cool and clean at a moderate pace with a very consistent, well balanced flavor from start to finish. Leaves little moisture in the bowl, and requires an average number relights. Has a pleasant, short lived after taste and lightly stronger room note. An all day smoke that won’t wear out its welcome.

I was really looking forward to trying this tobacco since I haven't had many tobaccos previously that were oriental-forward without Latakia as the main component. Also, I'm a big fan of Lovecraft's stories and any tobacco themed after those and the somewhat mystical Miskatonic University holds a special appeal.

I tried it first in a cob and was... Underwhelmed. It was a pleasant enough smoke but rather plain. No aspect of the flavor really stood out to me in any noticable way. I thought this tobacco might just be a lost cause since everything usually tastes great in a cob.

I decided to give it another go however in a briar. I grabbed my Dr. Grabow Omega, which I normally reserve for burley blends, and gave Miskatonic Mixture another go. Man! What a difference! What initially was an unremarkable tobacco took on greater complexity and flavor than it had on my first try. Maybe I was getting some flavor from the burley built cake or maybe it just needs something in briar to bring out the best in it, but it really stepped up. Don't get me wrong, it was still a mild flavor, but it was a mild flavor with more subtlety and depth. I don't have a discerning enough pallet to name off all the individual flavors, but I still know an improvement when I taste one.

I recommend this tobacco for anyone looking for a pleasant smoke with low nicotine to enjoy while active or relaxing and I heartily recommend using a briar pipe.

Despite C&D’s Miskatonic Mixture is billed as “Virginia Based”, and there’s plenty of VA here, this blend actually features its Orientals. If you’re good with that, it’s a 4 star blend, IMO, in terms of balance, smoke-ability, and the quality of the tobacco. In the tin are moist ribbons ranging from a few golden to mostly mid red-brown and brown, with some black bits. Tin note is something like an improved version of Christmas rum cake that has little or no rum in it, floral and woody at the same time, with fragrant grasses that are more countryside than forest floor, since there is no loam. It handles, loads, lights and smokes right down like a dream. It can be smoked straight from the tin, if you want to do that, or wait a few days after opening it for a more fragrant smoke that burns better. I prefer MM from a 3.5 size Oriental briar, even though MM burns pretty fast. I pack it some and smoke it very slowly to get more complexity and a more floral fragrance, and this method keeps the spices on the bakery and kabob end of the spectrum. Pepper builds over the course of the smoke, and noticeably more so if I puff away. The VAs have some depth, but basically they are grassy and slightly bready, and they sweeten, mellow and round out the sour Orientals. The sour Perique augments the Katerini spices without making it too intense, and it also lends a faint figgy taste. The Cav smooths and sweetens what would otherwise be a fairly sour smoke, also toning down the bright spices. Nicotine is minimal. Strength develops to medium. Tastes are well balanced in the midrange, with substantial highlights that build to just past medium. Room note is pleasant to me. Aftertaste is the best of the smoke, only sweeter, and it lingers longer than some Oriental blends, due, I suppose, to the VAs.

MM has moved quickly from evaluations to my regular rotation. It’s nice to have a tasty, Oriental forward blend that does not include Latakia.

Age When Smoked: year give or take

C&D seem to have several underrated blends that I never hear come up in online pipe discourse and I’m not entirely sure why. If I had to guess, I’d say that online discussions revolve around classic, universally loved blends or newer, experimental blends with highly exaggerated blending techniques. The quintessential smokes get brought up over and over and some of the newer ones get hyped up because of their more exaggerated qualities (this blend was aged in a rum barrel, this one has 85% Latakia, this one sends you over the moon and comes with a free ticket to nirvana inside, etc etc). Anything less than “out of this world” marketing or gimmicks get pushed into the background and forgotten about, and I’ve found my most quality, choice smokes to be in this camp, which is why I was a bit skeptical when I picked this one up on a whim.

I really enjoy finding the understated hidden gems in pipe tobacco and this is definitely one of them. I basically picked this one up because it was Halloween time and I was familiar with HP Lovecraft and liked the theming of The Old One’s lineup. I was expecting something a bit more “out there” and intense due to the nature of Lovecraft and the packaging, but was surprised at how tame and mild this one was.

When I first opened the tin, there was a strange and totally unique aroma that almost smelled like feta cheese or something, which I can only assume is the Katarini. The first few smokes had this kind of flavor to them, but as it decanted in the tin this became more subtle and less noticeable.

This is definitely a more balanced blend and everything comes together nicely to create a more singular experience. The Virginia’s seem to be a subtle mix of hay, grass, toast and citrus while the orientals add a light herbal, incense quality. The Perique had the usual notes of dark fruit and peppery spice. I’m not a big fan of Perique heavy blends, and this had a perfect amount for a blend like this. Really hits the “just right” Goldilocks spot for me. The granulated Perique makes it to where you can go quite a few puffs without any and then you get an exiting splash of it all at once that breaks the monotony, and then gently sends you back to tasting the Virginia’s and orientals. The katarini adds a “cheese” note to the whole thing that makes the whole thing less one note by disappearing and reappearing again, not unlike the granulated Perique. I’d say that the black cav adds a touch of subtle sweetness and a bit of a “dusty cellar” note to the whole thing and ties it all together.

If I had to say what kind of family this was in I’d have to say it’s a combination of Va/Or and Va/Per. The Virginia and orientals makes up the bulk of the flavor here but everything else is added with a subtle and calculating hand of a master blender. It’s exceptionally balanced and natural tasting and definitely one for the enthusiast that can appreciate this type of subtlety and nuance. If you enjoy something that’s a bit more separated and easier to pick out the individual components, this isn’t it. If you enjoy something a bit more together and uniform but still enjoy the challenge of nosing everything out, this will be one to try.

The tobacco itself comes moist and needs about ten minutes of drying time. After a few days decanting it gets a bit dryer and can be thrown in your pipe straight from the tin. I thought this would be a special occasion type of smoke but it ended up being more of an all day, every day blend for me. It’s really taken over my October smoking and I’ll probably run out before the month ends. It’s pretty dry and burns a bit fast and hot in the bowl, so slow, gentle puffing is required.

I’ve been debating back and forth if this would be better new or aged and I think both would be equally enjoyable for different reasons. I imagine some age would deepen all the darker flavors and bring everything together even more than it already is. I have no idea what it would do for the katarini and think it would be interesting to see. Probably going to buy another tin to cellar away for a later date.

The presentation was very attractive and had a mix a blond and brown leaf with some black cav and occasional granule if Perique and light-green katarini poking out. This is mostly a nice ribbon cut with an occasional small broken flake here and there, which makes for a great smoke and cools the blend a bit. I rarely brake these flakes up. I found a twig or two of what I imagine is from the katarini if I had to guess and I assume this may have been intentional as it had a bit of a floral scent past the tobacco smell from sitting in the tin, but I could be totally wrong about this. It just seemed more “woody” than traditional tobacco stems. If it did anything for the blend, I probably attributed it to the orientals by mistake.

Overall, this is an exceptional tobacco that I feel is understated and underrated. It smells a bit strong in a fresh tin, which might give you the impression that it will be a bit too “far out” for your taste, but this really proved to be a highly addictive and enjoyable smoke that I could enjoy year round. It’s natural and balanced with just the right levels of intrigue to hold my interest. It smokes and packs easily and checks all the boxes for me. I look forward to trying more of the Old Gods. Don’t let the Lovecraft theming scare you off from trying this one!

Edit: I’m going to say that the closest thing I’ve had to this is SPC - Mississippi River, but I’ll also say that they are almost nothing alike even though they are in the same family. Being Va/Or’s means that it will have that same sour tang, but they are two totally different animals. I prefer something like this over Mississippi River any day.