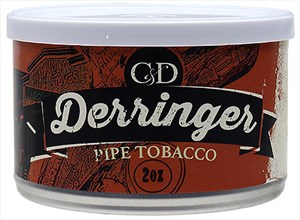 Simple yet unique, heady yet versatile, elegant but still packing a whollop, we think you'll find this killer Virginia blend much as the settlers of the Old West found its namesake. Presented as a ready rubbed so it's quick to pack and smooth on the draw.

Note: from bulk, not a tin.

The blend's been rubbed to a coarse ribbon of medium brown and a few yellows. The aroma from the blend is an expected straight Virginia, and my moisture's good.

Derringer gives a rich tasting, Virginia, smoke. There's a pleasant sweetness, some of the usual grass and hay, and a fruitiness which gains strength throughout a bowl: for the first part of a bowl all the flavours are well rounded with one another, but towards the end the fruity character dominates. With casual puffing the temperature's medium, but if the pipe's strained it becomes a bit hot. Stressful puffing also causes it to bite.

For flavour, alone, Derringer easily achieves four stars, but the heat and bite reduce this to three.

The brown, red, orange and stoved brighter fermented Virginias provide an abundance of tart and very tangy citrus, tangy ripe dark fruit, a little dried fruit, plenty of earth and wood, some bread, grass and hay, vegetation, light sugar, spice, acidity and floralness, along with a couple drops of honey and vinegar. I also sense a very small stewed fruit note. There is a very light sugar casing in the mix to tame potential harshness. For the most part, the strength and taste aspects fall a slot short of the medium threshold. The nic-hit is a tad less potent than the strength level. It won’t bite or get harsh, but it does sport a few rough edges. Well balanced, fairly complex and nuanced, it burns clean and relatively cool at a slightly slow pace with a mostly consistent woody, earthy, mildly sweet and spicy, piquant flavor that translates to the pleasantly lingering after taste and room note. This is more of a sipping blend as the characteristics of the ready rubbed Virginias tend to have a rugged, punchy, savory quality to them. In fact, it gets a little more savory and stronger in the last third of the bowl as the strength and taste eventually reach the medium mark. Leaves little dampness in the bowl, and requires a few more than an average number of relights. It’s not quite an all day smoke, but it is repeatable. Three and a half stars out of four.

I was browsing the ‘What’s New’ section and noticed that Jiminks had reviewed this and I recalled having bought some of this about 6 months ago, September to be exact. So, I dug it up and smoked some more. I had bought 4 ounces of this along with about six others when there was a bulk sell and jarred them. Out of the jar this has a really pleasant sweet typical grassy, hay Virginia smell. This is a thick cut ribbon of reddish-brown tobacco. I loaded up my Meerschaum and the first few puffs were somewhat tart, astringent. These are the first words that came to mind but it mellowed out some. As this is a straight Virginia, I do not expect it to taste like a blend. The next day I decided to use a corn cob as for me cobs and Virginias go together. I have a few Generals but the stem diameter is too large for me as I tend to sometimes draw in ash as I smoke toward the bottom of the bowl. The round paper Medico filters do not fit so I used a 6mm balsa filter instead. Not sure if it is some form of power of suggestion but it really tasted a lot smoother, not as tart and had a pleasant VA tobaccy taste in the cob and the filter probably tamed it some also. Not a bad change of pace.

Another paid sample from the 2018 Chicago Pipe Show. Pure Virginia's, relatively mild, very tasty, I loved this one. The best testament I can make for this baccy is that I'm going to buy more. If you love light Virginia's, you can't go wrong with Derringer (great name, by the way!).

Received a sample of this, enough for a couple of bowls. Normal coarse cut from C&D. Lights and smokes easy. Bites a bit. I feel with some age it could be a middle of the pack runner in the crowded Virginia field. Probably a good blend to start with for a beginner smoker who is delving into straight Virginia’s. Nothing presented itself that would make me want to try it aged or even again for that matter.

While I havent had too many Cornell and Diehl straight virginia blends that I have really enjoyed, Derringer is one that I have been surprised by.

The aroma is sweet and slightly grassy. From first puff to last its sweet with some citrus and a nuttiness that you get from some darker Virginia's, but mostly just a nice virginia overall flavor. Towards the bottom i get a black pepper flavor and spice. It burns cool and clean with no bite.

So far this is one of the best offering for a straight virginia from Cornell and Diehl. According to a YouTube video from them about casing vs toppings, Derringer is cased with sugar. The casing along with the stoved brights sweeten and smooth this blend out. It reminds me of Sam Gawith Best Brown Flake with the nutty character but not as full. A great all day Va that wont burn you tastes out.