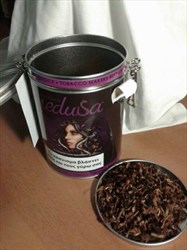 "It was created in honor of the Mystery of the Pyramids of Egypt. Just the same mystery of smoky pleasure accompanies this smoke!"

According to the producers Pyramid consist of 5.4 parts Latakia from Egypt, 4.8 parts Virginia gold leave from Maryland and 4.8 parts of Izmir form Katerini in Greece.Tin note is that of a spicy English mixture with the smokiness being milder than in most as if the wood has not been let to burn completely, retaining thus the feel of the tree bark and the shrubs. I think I can sense pine tree. It comes in ribbons of bright, brown and dark, almost black ribbons in equal proportions.

With the first whiff you are greeted with a very tasty, full flavor, savoury English in the mould of Squadron Leader, I dare say. As far as the Latakia contribution to the blend Pyramid is a medium English and the actual content is around 35%.

Latakia - from Egypt - which I have never seen before, is leathery not excessively smoky and it is backed by a crisp bright Virginia with ample sweetness and a hay-like character. The Izmir adds a fluffy, rounder element than the crispier Virginia, which is also sweet, spicy (nutmeg and even cinammon) and nutty with notes at times reminiscent of sweet pastry. Pyramid is a complex English which sports a very interesting interplay and contrast between the savoury Latakia the crisp Virginia and the sweet spicy Izmir. All three leafs play an equal part and neither of them dominates but all take their lead at times. That said and in comparison with most Englishes, Pyramid is an unreservedly Oriental forward English. With every whiff I get a slightly different nuance. Sometimes the overall feel is crispy other times it is mellower. It also leaves a nice aftertaste. Kudos to the blender for creating such an interesting, balanced and complex blend without resorting to any excess in order to impress.

As far as burning behavior Pyramid is excellent, takes to light easily, burns cool and needs only a few relights. Strength wise it is medium as is nicotine content. Does not bite and for those who smoke Englishes can be used as an all day tobacco, although Pyramid for me is a delicacy.

Although a new product Pyramid succeeds to enter the ocean of English mixtures with an offer which seems to defy trends and refer directly to the most venerable and old school of all English mixtures, Squadron Leader. It succeeds in this first because of its impeccable balance of Latakia, Virginia and Oriental where all three shine without any one leaf overshadowing the other and second because of the top class, unadulterated tobacco it employs - if I had to place my bets on one tobacco which is not cased at all I would bet on Pyramid. An absolute four star English blend for me!

This is the first tobacco I got from Wolfway when Dunhill closed, as up to that point I used to only smoke Nightcap, and did not get disappointed.

It is an Oriental forward English blend, with Egyptian Latakia (which I'd never heard of), overall of very high quality like other Wolfway offerings.

The Latakia is more smoky/leathery than creosote and definitely lighter than other English blends, and the Izmir leaf grown in Greece is quite powerful. I don't get a lot from the Virginia (in any English/Oriental blend) but it is there, keeping things in balance.

It is a very nice smoke, I'd consider that whatever it lacks in terms of spice from Nightcap's perique addition it gains from Izmir, think more incense than spicy fermented fruit though. While the blend is not sweet, the Izmir leaf fills in beautifully for that as well - probably supported by the Virginia which is otherwise undetectable by me. I've tried Wolfway's Basma, which they claim is among the best pure Basma leaf anyone can buy and think they did well by not going with it as it would overpower the blend, while Izmir is somewhat softer and fits just right.

Even the fact that this blend stood in for an acceptable Nightcap replacement should be a cue as to how good of an English blend it is, highly recommended!

If you are in search of new oriental tobaccos like me ,I would definitely recommend this one. A latakia strong blend, well balanced if I may say. Maybe not quite the package design deal ,but still worth it. I quite enjoyed the first bowl. And the second after, well my oh my it goes on... :)

At first, it's very nice that the Medusa pipe blends are back in circulation. The specific review is about the re-issue of the blend from Medusa in the bag of 100gr. I had tens of tins of the previous version (150 gr loose in a tin) and in my opinion, it even got better. This is a mild oriental (with a hint of an english character) blend that can be easily smoked all day. The taste is developing as you go through the bowl, making it a complex tasteful blend. Latakia and virginia are in the background popping up at times, while oriental give the body of aroma. If one word was allowed to describe the taste that would be "earthy". Like the aroma of the first autumn rain.

The strongest point of all Medusa blends is they are not only labeled as non additives tobacco blends, but one can feel this is true in their behavior in smoking them. Not a hint of something other than great quality tobacco. I think the specific blend will age perfectly and will gain even more versatility. But even as fresh as it is, one immediately detects that this blend used tobacco of the highest quality. In my opinion an experienced pipe smoker will adore this blend for its purity.