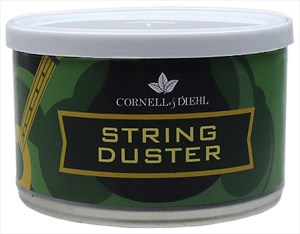 A duet of red and bright Virginias take the lead, followed by the lively harmony of Turkish leaf and the lightest notes of rum and maple, making for a sweet tune you'll want to play time and time again.

Red and Bright Virginias, Turkish Leaf with a splash of maple and rum. Smells like Butter Nut Rum in the tin. The Butter nut rum is there at the first light, the virginias are hay and grassy. The Turkish seems to add a bit of nuttiness. As it smokes down the topping stays with the smoke, sweetening the tobacco. I had to smoke this slow to get much flavor from it. It's better than the average aromatic, the tobaccos are good quality, the leaf doesn't deteriorate, but the topping does in the last third of the bowl; Leaving this blend in the OTC camp. IMHO. It smokes hot, so I'm thinking of leaving whatever I smoke in the tin overnight to kind of dry out, it's not sopping wet, but wet enough that the topping screws with the smoking mechanics. I suspect the room note is nice enough to smoke around a crowd. If aromatics are your thing, check it out. I probably won't buy another tin. Every time I smoke an aromatic I secretly wish I was smoking GLP Union Sqaure, C&D Haunted Bookshop, or a nice Vaper.

Update: Allowing this tobacco to have time away from the tin for a while, really changes this blend. I'd have to say that I'll definitely be buying more of this. The maple has settled down, allowing the rum a little room in the taste and the tobaccos benefit from this. At the end of the day, you got an aromatic that is big on tobacco flavor with a sweet top note to enhance the tobaccos sweetness. Best advice? Open a tin and let it sit in a jar for a few days.

The tart and tangy, dark fruity, earthy red Virginia is a little more noticeable than the very citrusy, grassy bright Virginia. The woody, earthy, smoky, mildly floral, buttery sweet and slightly sour and spicy Turkish is a supporting player. The rum is a tad more obvious than the maple and both are lightly applied, so they don’t sublimate the tobaccos very much. They do tend to recede a little in the last third of the bowl. The strength and taste levels are almost in the center of mild to medium, and takes a step closer to medium as you go along, though the latter aspect just touches the medium threshold as the toppings lightly diminish, and you notice the tobaccos a little more. The nic-hit is mild to medium. No chance of bite or harshness, and there’s no dull moments or rough edges. Burns cool and clean at a reasonable pace with a tangy sweet, lightly floral, mildly savory flavor. Leaves little dampness in the bowl, and requires just more than an average number of relights. Has a lightly lingering pleasant after taste, and can be an all day smoke for those who want an aromatic with a little punch.

This review is based on a 3 to 4 bowls worth of a sample. First thing I'll have to say: I absolutely LOVE the unburnt aroma of this blend. You clearly get the maple, as well as some mild vanilla. The rum is expectionally mild and rather unnoticeable in the scent to me.

This isn't a ribbon-cut tho, it's a mixutre of broken flake chunks and few (thick) ribbons. Easy to pack, just grab a pinch, stuff it, light it - this and the well balanced ratio between real tobacco flavor and added flavorings make it a perfect first blend for a beginner to me! I would've loved to have smoked this as my first blend!

In the pipe it's a nice "semi-aromatic" blend, with a good harmony between natural tobaccos and added flavourings. The Virginias sets the foundation for the blend, one of those "C&D Virginias" that's rather earthy and hay-ish than grassy and citrusy - which I love! The Turkish is rather light handedly applied, yet everpresent giving a nice spicy-tart kick to this blend. Some ethereal-flowery notes also shine through, which harmonize excellently with the maple flavoring.

The maple is the most obvious of the flavourings to me. Followed by a vanilla note, that's quite pleasant and harmonious in interaction with the other aromas of this blend. The rum is exceptionally mild, if not to say almost unnoticeable. Yet it adds a slight alcohol-ish, rummy twist to the smoke.

Very smooth, but also some tart notes to it. Sweet, but not overly so and definetly enough spiciness to keep Yin-Yang-like balance in this blend. Nice smoke, I think I'll grab a tin on occasion! ;-) 3,5-stars personal rating, but this can easily be a 4-star blend for some!

Another solid aromatic from C&D. Maple flavor is in the forefront with rum coming through occasionally creating an interesting mix. Rum and maple are two of the more popular aromatic flavors but this is the only blend I've seen that has them together. Was fairly dry, even just out of the tin (though the tin was over a year old when I opened it) and smokes fast too. Didn't get bite from this, but the pipe did feel hot at times. Recommended.

I was struck with desire to listen to the infamous stringdusters this morning. Remembering I bought a tin of this stuff based solely on the name I figured with coffee and music this might be a pleasant morning. My tin has a 2017 sticker on the bottom and on opening it I am supprised the moisture is about perfect. It is a bit sticky but I suppose that can be attributed to the topping. It is a very bready tin note a little sweet but not enough to drive me away. The tin description says it is a sweet tune but I don't get that at all. VA bread and savoryness with Turkish sour hints. Lots of smoke that I couldn't get to bite. Medium to mild in all aspects. This was only the first bowl that I rubbed out pretty well, but I really enjoyed it with my morning coffee. Today has started well I think.