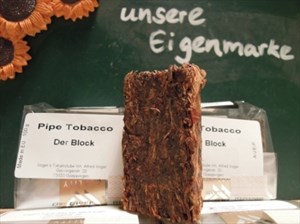 A specialty for gourmets and specialists. Pressed, matured for several months in bar form, this plug consisting from dark Virginia, Kentucky and perique is finally cut into blocks.

Notes: "Der Block" is German for "The block"

On my recent "sample-spree", where I ordered many, many samples from a lot of various shops to find some blends for my tobacco-bar, I was send a very generous sample (I'd estimate the sample to be 15-20g of tobacco!!) of "Der Block". Thanks Mr. Vogel, I really appreciate it, just as the personal note he did write to the samples.

As I never tried one of "Vogel's" house blends before. I got aware of this shop, when I was looking for a "solid Burley blend" and got recommended "Massimo" by Vogels (which I'll also be reviewing)

I got a (estimated) 4x5cm slice of the block, that was roughly a 1cm in thickness. The Plug itself smells very mild and in inconspicuous, you really have to stick your nose close to the tobacco to get it's scent. That's a good sign to me, as I made the experience: The more mild/inconspicuous a tobacco smells, the more natural it will taste most of the times! Taking a sniff on the plug reveals not much. Gentle sourness, maybe a bit sweet and spicy.

Shaved off some slices, rubbed them out and let them dry for ~1 hour. Could've been smoked right away, too if you prefer you tobacco a bit more moist. Lovely in handling, relatively firmly pressed plug tobacco.

Usually I write my reviews like "the deep plum-y and raisin-y flavour of the Perique" or "the citrusy, hay-ish and honey-ish aroma of the..." But for this one it's pretty hard to find comparisons to eat-able things. Really, this one is best described as: mild tobacco-ey taste! But I'll give it a try anyways to make the taste-profile more graspable for anyone whom hasn't smoked this blend.

The Perique constantly contributes a slight sourness, on which the flavour-profile builds up. At the beginning there isn't much of its typical fruit taste to the Perique, yet while progressing along the bowl a decent plum-y tone gets more noticeable. It also has slight peppery spice, that's noticeably tingling on your tongue. The Kentucky adds a bit of body to the tobacco, while offering decent spice and a hints of nutiness that's melting with the sourness in the back. Dark Virginas hold a decent share of honey-ish sweetness, that seems all natural to me and helps contrasting the sour- and spicy-character of this blend.

"Der Block" really is an uncomplicated, unspoiled and very natural seeming plug tobacco, that will appeal to anyone, whom like a full-bodied, most natural smoke, that also has "All-Day"-capabilities to it, as it's rather mild- to medium in strenght (Nicotine- and taste-wise). Doens't bite, nor get harsh.

I just cant help but to me, it had an aroma, which I found annoying and which I can only describe as "dough" (the kids toy, hope google translated this right it also suggest "knead"), if you ever took a sniff on it. The flavour really irritates me and is present throughout the whole smoke, so I sadly can only give well-meaning 2/4 stars. Maybe other people dont perceive that note, I'm curious if anyoneone else will review on it.