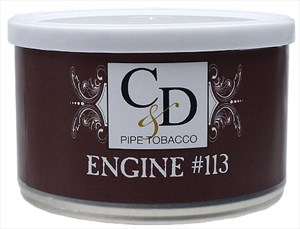 Once an integral part of the North American mining industry, CNJ #113 was the last fully-operational steam engine for Pottsville, PA's Reading Anthracite Company. Commemorating its 30 years of service, the mixture of red and bright Virginias, cube cut Burley leaf, and dark fired Kentucky, imbued with notes of brandy and vanilla, is sure to help you let off steam.

Let me start with a disclaimer: For a long time I have enjoyed English blends, VaPers and some American burley blends in my rotation. I have not revisited aromatics since my first foray years ago; that is until just recently. Two recent tins have opened my eyes to aros again – C&D Epiphany and Kramer’s Cary Grant. Smoking through these tins have shown me that aromatics exist that display none of the characteristics that had turned me off early on – not overly wet and chemical-tasting, the flavour doesn’t quickly yield to bitterness, and toppings add a point of interest, while still allowing the tobacco to shine. It is with renewed enthusiasm, that I pulled the trigger on Engine #113. See below for some tasting notes.

First, I took notice of the color in the tin. This blend came in significantly lighter hues of browns than I had expected, a good sign both for the level of moisture and for me, I view it as a positive that this isn’t another Cavendish aro. The burleys form the base and the bulk of the volume in the blend. In the description it states they are cube cut, and I do see shorter and longer ribbons, among which are the similarly-colored medium brown and brighter yellow Virginias, and the dark-fired Kentucky that can be picked out by their slightly darker color in the mix. To me, the tin aroma was different to my expectations, given the description highlights brandy and vanilla. I could pick out the vanilla explicitly, but I would describe the overall pouch note as a molasses or dark caramel. In fact, this holds to the taste as well – more later. On filling my bowl, the sponginess told me that contrary to the color, there was a good bit more moisture than I had expected based on the appearance; 20 minutes spread on a tray was required after all.

Fast forward to go time - On true light, the bowl starts with that same vanilla, caramel note. The C&D burleys were obvious, but again slightly wetter than they tend to come in other blends (like Haunted Bookshop, or others that come to mind), and therefore they don’t have the sort of dusty flavour profile that one may grow to expect from C&D. As referenced above, the fragrance and the taste were consistent, unlike many aros I have tried, and they had a consistent note of a caramel and vanilla, rather than the brandy in the description. It’s fine with me either way, just my observation. The Kentucky became a focal point for me into the first third. Slight smokiness that I could pick out on retrohale and which wouldn’t be present in Burley or flue-cured VA alone. What I never could put my finger on with confidence were the Virginias. They just never came to the fore, though the subtle sweetness of the overall caramel or molasses can only have come from the reds. The strength was a shade under medium at the start but built to a solid medium half-way through. The moment of truth for me comes at mid-bowl. In my experience with lesser quality aromatics, there would be a noticeable change as the top note burns off. In fact the note did change to an ashy flavour, but by tipping out the chunky white cap of ash, the bowl was reinvigorated and good to go again. I was able to enjoy this bowl down to the heel, with a relatively stable flavour, and with subtly increasing overall strength (not to mention the N which was more than adequate). I must say that this was a very satisfying experience overall. I enjoyed this smoke and now include Engine #113 along with Kramer’s and Epiphany as aromatics I have learned to enjoy.

If I'm honest, when I grabbed this first thing today, I expected it to be an English like C+D E.99 or a Va like their #382. Never mind! Grabbed it, opened it, smoked it; C'est la vie!

Mine was supplied from bulk so had good moistness; the pouch had allowed it to breath. In the unlit note the alcohol beats the vanilla.

Igniting a bowl is exactly as you'd want: easy. And then, being fair, it burns well. On the negative side it bites, but as that's more subjective I guess I can't abate the score much for that!!

The flavour? I get far more alcohol and fruit than vanilla. But, the alcohol seems nondescript; there isn't a 'sweet brandy' flavour, instead just a piquant alcohol taste. In keeping with the acidulous alcohol note are the blackberries; these increase the causticity. Vanilla, where? The tobaccos might taste ok, albeit, I feel the only descriptive word is the overused sublimated; the natural side is greatly sublimated by the toppings!

Nicotine: below medium. Room-note: not bad!

Engine #113? Hmmm, think it would struggle to warrant more than two stars, at a push:

Well hell, I guess I’ve gone down an aromatic wormhole of late, some by my own doing, other’s not. This is my own doing.

I purchased this a few months ago during a c&d sale on one of the major online retailer sites, only after my interested was piqued by the smoking pipes mystery blend YouTube video.

It must be the blackberry as the last few blend although this one does not mention it on the tin has that same taste.

The brandy and vanilla are perfect so that the boozy brandy doesn’t become to abrasive and is rounded out. This blend was much better than Barbary coast I find and the tobacco taste was well rounded with the nutty burley coming through and the Kentucky adding body.

Pack this loose and it smokes easily, sip it and it will treat you well. this tin had 2 years and a nice poof upon opening could this have changed the blend and made it better I surely think so.

The first 4 star aromatic blend? Not quite but I prefer this over Barbary Coast by GL. Pease.

Is it a bad thing that when you open a 2oz. tin of tobacco supposedly topped with Blackberries, Brandy(Blackberry Brandy?) and vanilla, and all you get is a snootfull of grape juice?

That's all I got from Eng. 113. Moisture level was fine, lites right up, stays lit. Ok so far for the preliminaries. The smoke has a dry quality to it. Maybe a bit too much Kentucky. More Vanilla might have calmed things down a bit because although listed, it's non-existant. The only tobacco I get is Kentucky and the aforementioned grape juice.

2 stars only because it behaves itself providing you don't push it or those grapes will surely attack your innocent tongue.

Another of the under the radar Engine series from C&D.

This one was interesting, when I first tried it new I really, really didn't care for it. A couple of years later I found the jar and decided to give it another try.

As as aged tobacco you can taste the base tobacco and the ky fire cured giving it a little bit of "spice". The fake tasting blackberry brandy is now subdued to the point that it tastes more berry than fake booze and it adds to the top notes. It's gone from being a def 1 star to a 2 star but not something I'd buy again with some many better blends out there.

Engine 113 has a wonderful brandy aroma with a slight fruit hanging in the background. a vanilla top note is not noted in the pouch aroma.

Appearance looks to be a fairly equal amount of burley and Virginia, with a smidge of Kentucky. The leaf is cut in short, fine ribbons, without a single stem to be found in the 2oz pouch. Awesome!

This offering packs well, and lights well due to the moisture content being just about perfect. Minimal relight required.

The added brandy doesn't seem to come through in the smoke. The Kentucky seems to take front stage the entire smoke, and rarely lets anyone else sing. On occasion, I'll get a slight sweetness from the Virginia and vanilla, but for the most part it's all Burley and Kentucky.

This blend seems much better in the cooler late winter/early spring for me than it does with any sort of heat. I think I have come to the realization that I just don't get on well with C&D burley blends. Every one that I smoke seems ashy and dry on the palate. I'll age this one for another few months and revisit. right now, 2 stars