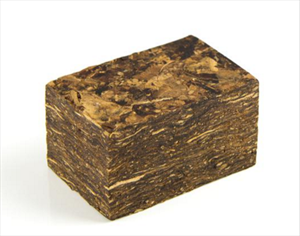 A mixture from red mottled Virginia and Carolina leaf, to which is added a bit of Turkish Havana and a medium strength Kentucky to achieve balance. Everything is mixed and stored for some days to marry the components. The the mixture is cut into 10 pound pieces, and then cold-pressed for several weeks. In that time, a natural harmony is achieved and a slow burning flake is produced.

Notes: This is an UNCUT version of the old "Scottish Flake" recipe by McConnell. Both produced by K&K, but now Scottish Flake is a Va/Per/Ky with Rum.

As this is the EXACT same tobacco as the old recipe of McConnells "Scottish Flake" I don't have to write too much about it's taste. I reviewed the "Red Mottled Virginias, Carolina, Turkish Havana, Kentucky"-version of Scottish Flake already on here if you're interested in reading.

After contacting K&K two times and asking if the recipe for Scottish Flake changed (it's Va/Per/Ky with Rum now) and not getting any clear answer - furthermore the 2nd time I asked they completly denied it ever was a Va/Carolina/Turkish Havana/Kentucky blend - I simply asked the guy from Peter Heinrichs.

Why would they do so? Somebody must be lying obviously as Crue No. 6 and my tin of Scottish Flake (of which Peter Heinrichs has plenty left) ain't got any Perique in it, nor a Rum-flavouring, that's a sure thing. 100% there's Oriental in it. K&K is a giant in the branch, still I prefer the transparancy, personal contact and honesty from smaller producers like Motzek, HU or other smaller comapnies, who involve their customers, rather than being un-transparent and not even being clear about ingridents in their blend. A real disappointment to me from K&K.

Peter Heinrichs get's their tobaccos from Kohlhase & Kopp, who also produces McConnells tobaccos. He assured me this they changed the blend and Reserve Crue No. 6 is exactly this old incarnation of Scottish Flake. Just look at the description: Every single word is the same!

I compared Reserve Crue No. 6 with Scottish Flake several times now smoking them in a row and feel confident to say: It IS 100% the same tobacco as the Scottish Flake with the description of "Va/NC/Turkish/KY".

It has the EXACT same flavour. The only difference is that it is a plug. The price of 17,10€ for 100g has a slight advantage of 9,40€ for a 50g tin of Scottish Flake. The fact that it's a plug is also advantage to me, as I enjoy the preparation a lot.

I'll be sticking to Reserve Crue No. 6 as it's a tad cheaper than Scottish Flake, just as I find the plug-cut to be superior and a whiff more intense in flavour than the flake-cut version. Also the stock of old-recipe tins at Peter Heinrichs will run out soon and not many other shops offer the old-recipe. If I were to choose 5 tobaccos for living on a lonley Island Reserve Crue No. 6 would be one of them without thinking twice. This herb is divine.