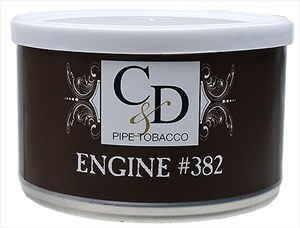 Named for the passenger train driven by the famous Casey Jones, Engine #382 combines dark and white Burley, bright Virginia leaf, and unsweetened black Cavendish with the soft, vanilla-like flavor of Deer Tongue, making for one pleasant and unique smoking experience.

This tobacco was bought because of the train theme, because I love C & D blends and also because I wanted to try Deer Tongue. I would describe it as being more burley based, but your milage may vary. The taste was a little unusual on the first smoke but it grew on me - I had never tried Deer Tongue before. I'd describe this as being a very 'aromatic' tobacco without being an aromatic. The Cavendish also provides a very subtle sweetness.

I'd say the strength is medium, however it gives me a one of a kind nicotine kick which is perfect for the morning, it also has enough complexity for me to want to smoke it later in the day.

Perfect moisture content, and no tongue bite for me.

Now that I've read that this one also has Deer-Tounge to it, I'm even more surprised what scents this leaf can produce in interplay with tobaccos! I would've never guessed there's deer-tounge in it, the other C&D deer-tongue blends are VERY different in scent. I'm inclined to say it's the best tin-/pouch-note I've experienced so far!

It smells very Marzipan-ish! Marzipan, nuts and whipped cream with a good backdrop of honey. It gives me a very christmas-ish feeling, as the pastries we have 'round here have a very similar scent to it. My girlfriend swears she picks up some cinnamon-sticks as well, and it doesn't seem too far off for me! There's also a distinct herbal quality to it.

The leaf is a bit more moist than my average C&D Burley blends, but not overly so and easy to pack and light/keep lit.

Right off the bat the Burleys set stage for this blend with its very nutty, decently earthy/woodsy notes and its (as usual with C&D Burleys) rich taste. The B.Cavendish, just as in Pegasus, is exceptionally well woven into the taste and is far from being goopy, in fact it's unsweetned and I see it more as a catalyst for the other components, as you don't pick it up as such. The smatterings of Perique add interest to the blend offering a richly spicy and some dark-fruit notes every now and then that keep me interested and keep the blend from being monochromatic. But mainly it smokes like a Va/Bur to me - one of the best I have enjoyed so far!

... but then, it's no Va/Bur per se, as there's the deer-tongue! It takes a few puffs for it to develop its flavors and to really engage in this blend. It comes along very smooth and if not overpuffed it won't get harsh, but offers an interesting twist to this blend. Notes that are reminiscent of vanilla and herbs melt with the other components to offer some most interesting and pleasing qualities to the spicy-sweet and bold-nutty Va/Bur foundation.

As I progress through the bowl the Burley's nuttiness really begins to shine with the smooth sweetness and lime-ish notes offered by the VAs. Enhanced by the Cavendish, whilst the deer-tongue leans towards its herbal qualities after the first third of the bowl.

This tobacco is so refreshingly herbal! It never bites. It smells yellowgreen and floral, a bit of mown hay too, in the tin, which is a nice treat when loading up my pipe. When smoking, its taste reminds me I’m enjoying a product of nature - something that was farmed, its leaves once tended to and cared for as growing, vibrant, plants. Those around me when I light up this leafy treat have remarked that it smells pleasant (they’re prejudiced to expect stench from someone else’s smoke). And lady nicotine comes along for a ride here all dressed up in a floral sundress.

When I opened this I didn't know whether it was an English, VaPer, Kentucky, etc., but the first thing to give an inclination as to what it was came from the identification of some greeny, yellow, twigs: deer tongue.

The Deer tongue has more of a vanilla taste for the first quarter. As the bowl burns it develops a herby quality, then it becomes bitter; this causes the low score. Out of the tobaccos the Burley gives the most flavour, but I get more Perique than I'd expected to. The Virginia's present, albeit quite boring, and the Cavendish gives a slight sweetness. It burns quite fast, and also quite warm.

Not my thing. Not recommended:

If you enjoy the taste of deer tongue please feel free to disregard this review.

I bought this on a whim in order to try the deer tongue herb.

I bought the bulk version and when I packed my bowl I noticed a tiny amount of the green colored herb and wondered if I would even be able to separate it's taste from the tobaccos. Immediately after lighting it the taste assaulted my taste buds with a sweet vanilla ish flavour and I thought it was fantastic! Ten minutes later the flavour became overpowering and was drowning out any flavour other than that of the deer tongue. I continued to nail down the flavour profile past the pseudovanilla but couldn't ID it past a sweet vanilla plus something anise like. Another fifteen minutes after that I found the flavour buildup sickening and put my pipe down with the realization I will never smoke another bowl of tobacco that has had deer tongue added to it.

It stayed lit very well, burned well, and had a unique flavour. Unfortunately not a flavour I enjoyed. I haven't smoked the pipe I used to test this blend and hope to God it hasn't ghosted.

Age When Smoked: When Purchased

The dark and white burleys provide plenty of earth, wood, nuts, a little sugar and sourness, a pinch of spice, and light floral, sharp notes. They are the lead components. The bright Virginia offers some tart and tangy citrus, grass, bread, mild sugar, floralness, vegetation, very light spice, and a touch of acidity. It plays a secondary support role. So does the unsweetened black cavendish. The spicy, raisiny, plumy, earthy, woody perique slots above the condiment line. The aspects of the deer tongue are vanilla, herbs, and a little floralness. It moderately sublimates the tobaccos. The strength and nic-hit are just past the center of mild to medium. The taste is a notch past that level. There’s no chance of bite or harshness. Has very few rough edges. Burns cool and clean at a reasonable rate with a very consistent sweet and spicy, nutty, floral flavor that extends to the pleasantly lingering after taste. Leaves little dampness in the bowl, and requires an average number of relights. The floral room note is a little stronger than the after taste. Can be an all day smoke for those who like deer tongue. Three and a half stars.

The longer this sits in the jar the more the deer tongue starts to come out especially in the jar note. It seems to be in the smoke more and I get the same "tickle" in my mouth that I get from Crooner.

Not something I'd smoke all day, but I prefer it to Crooner for sure. --- 4/13/21 As many reviews as Crooner gets.. it's weird that this one stays so far under the radar and only has 2 reviews.

This is one of those CD blends that seems to have everything in it. The cut is a CD ribbon and tobacco is a mix of colors. . This is from the bulk version.

It's easy to pack and light. Usually only one light needed. There is deer tongue in there, it's very light handed. Crooner seems to really "tickle" my mouth.. this is very mild compared to that.

Beyond that.. it's hard to know where this one is going. The perique comes through at times with spice... overtimes it seems like a Vanilla aro... then it goes fairly bland at times.. but always with that mouth tickle.

It's one of those blends that I don't think will ever make it into my regular rotation, but is a nice change of pace when I feel the desire for a little deertongue in the mix.