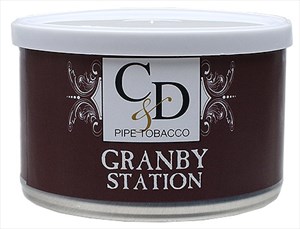 Like its namesake conduit to the majestic Rocky Mountains, this mixture of black cavendish and red Virginia leaf — adorned with the subtle spice of perique and topped with the flavors of vanilla and applejack — makes for an awe-inspiring experience.

The blend has an intriguing appearance, many shapes and colours. The aroma from it has a touch of sharp apples in there. It arrived at a smokeable moistness.

The smoke? I've never drank applejack so can't comment on the authenticity of the aromatic addition here, but what I can comment on is the way the smoke tastes to me. The main tobacco flavour's a VaBur one, sweetened with black Cavendish and hardly any Perique. The vanilla addition tastes nice, there's just enough to identify it, but the applejack has a flavour which is just bitter and sour; nowhere near as sweet as I'd have liked.

Granby Station? Although the applejack topping ruins the smoke I'll give it two stars based on the tobaccos and vanilla:

Arrived moist in pouch, set it out to dry for 30 minutes. Bag consist of mainly brown and black tobacco. Virginia's were mainly bready and the burly's tasted of molasses. The black cavendish was front and center with the topping adding a sweet mild honey flavor. Very nice aromatic, the topping did not drowned out the tobacco taste. I can barely taste the Perique at all. I think it may be adding a slight Plum flavor

I'm reviewing some Granby Station that has been jarred since June 2017 which I decided to try again during the great lockdown of 2020.

Still moist in the jar. Dark black and brown ribbons. Jar note is sweet, topping sweet. I let it sit out about 30 mins before packing each time.

Very easy to pack with the ribbon cut. Easy to get lit with a little tamping. The beginning of the smoke tasted 100% aromatic as it burned through the topping. I got vanilla (mild), and some sort of Alcohol.

Not sure if it is Applejack or not. Applejack is Apple Brandy mixed with clear liquor.. to make an Apple Whiskey.. https://lairdandcompany.com/ I always thought of it as redistilled Hard Cider (which I enjoy). There's a very faint apple note in the smoke if sipped softly, so I shall give it the benefit of the doubt.

As the bowls progressed I could pick up a slight pepper, which I will place with the perique and this hits the tongue as a little sourish.

Beyond that, the rest of the tobaccos seem to be along for the ride. It's not a bad smoke by any means as long as you smoke slowly and don't push it as it wants to burn a little hot if pushed at all.

Seemed to smoke best in Canadians with longer stems to help cool the heat. Put out generous clouds of smoke. Wife complemented a "fruity" room note, so that is a plus while I'm doing most of my smoking inside these days.

There is a slight sour aftertaste with probably 75% of the bowls. Can't figure out why not all of them.

I'll smoke the other ounce that I have, but I doubt this will be something I'd go out of my way to buy again.

I bought this tobacco because the name intrigued me. One of my favorite spots in the world is Grand Lake, Colorado. The town of Granby is nearby. There is a little Amtrak train station in Granby that can be used by residents of Denver to get to Rocky Mountain National Park and the lakes around Grand Lake. So, I ordered an ounce to try out. I am very pleased with the easy, cool, and fresh aroma of this fine tobacco. It packed well, only required one or two relights. One can definitely detect the apples throughout the smoke, along with a nice molasses influence. I will definitely be buying more to store in a Mason jar.

This review is based solely on first impressions after smoking only a couple bowls, so take it for what its worth.

Perique? What perique? I don't taste it, although it may contribute a bit to the fruity side of the flavor profile. It certainly adds no pepper. To me, this tastes almost like a straight Cavendish, although I'll accept the fact that other tobaccos are used in this blend.

Toppings are generously applied but not overly done. Smoked slowly in a corncob pipe, this burns down to mottled grey ash with a few bits of carbon and slightly less than average aromatic goop.

The liquor used to top this is apple jack. Apple jack is ice distilled from hard cider; the cider is left to freeze and the ice scraped from the top of the frozen cider. What remains is strong cider with an average alcohol content of around 10%, nearly double the strength of most hard ciders. This boozy concoction adds a lot of apple aroma and hint of alcohol to the pouch note, but ends up making the smoke taste a bit sour and fruity. The overall profile is a vanilla Cavendish flavor with just a little fruit in the background.

Mechanically, this earns a grade of B-minus. It can be abit hard to keep lit unless it has been dried a bit. A loose initial pack followed by frequent gentle tamping will ensure a steady burn to the bottom of the bowl.

I like this one, because it is different from most other aeros I enjoy. I can recommend this, but I won't give it 4 stars. There are better aeros available. I am glad I bought a 2 ounce bag to try, and I will finish the bag but at this point do not see myself reordering this.

Smells great in the bag. In fact, first thing I thought when opening it this close to Easter was, that it smelled like hot cross buns. Maybe fruitcake if you prefer, but definitely a sweet raisiny bread aroma.

The smell doesn't particularly carry over to the taste for me. It's neither very sweet-apart from the sweet grass hint from the virginia-nor sour, just a neutral rich tobacco flavor with earthy and subtle tones. The Cavendish is not highly toasted and imparts more coolness than flavor. There seems to be a complete lack of perique either visibly or gastronomically. I'm not sure what Applejack is, but I don't get any tartness or apple flavor at all. The pouch note also doesn't carry over to the room note, though it's not at all unpleasant.

Smoked it right out of the pouch with no drying, so it did sizzle the whole way through. Perhaps the casing vaporized off and left me with a false impression; I know by now to let tobacco properly age but I'm always impatient to try it right away. I'll come back and update in a few weeks possibly.

"Adorned with the subtle spice of Perique". The first time I opened the pouch I swear they sent me straight up blending Perique. Besides a slight sweetness, the aroma of the musty Perique overpowered any other aroma that may accompany it. This blend is an even mix of black and dark brown tobacco. Although it arrives moist, its not sticky and it does seen to hinder the burn. You may do well to dry this blend a while before lighting.

Initial lighting takes some time. The spring of the pack needs to be tamped a few times before its no longer an issue. I try to only pack half, to 3/4 of a bowl to allow for expansion, lest you will be charring your rim.

Granby Station produces thick, voluminous smoke. The spiciness and role of the Perique is more than subtle.

To be honest, this blend straight up confuses the hell out of my palate. Besides Perique, its not really obvious what other tobaccos are in here. Due to the strength, that tells me there is burley in here. I do get a subtle sweetness that I cannot tell if its from the VA or the vanilla topping. I do not detect any apple jack whatsoever. I smoked about an oz of this, and Im going to say its not for me....

It does have a ton of spring in the pack!

I really like this blend. Little sour tin/jar note. I definitely get a little vanilla upon lighting, and it hangs around with a slight sour note as well, I assume from the applejack (never tried it so don't know for sure). I get a little spicy tongue tingle but not in a bad biting way, and I assume this is perique. Several other reviews said the perique was almost unnoticeable, but since I have not smoked too many perique blends I must be a little more sensitive to it.

Only a handful of bowls in, so might be early to give 4 stars, but so far I really enjoy this, and will probably keep it in mind for further purchases. Highly recommended.

I have much love for C&D but this is the worst blend on their roster I have tried so far. Based on other ratings, I am clearly the outlier here. I did indeed pick up on the apple flavor, which comes across as generic apple juice from concentrate on the tip and sides of the tongue. The room note isn’t so great, and there is something just “off” about this blend. I really didn’t get much traditional pipe tobacco flavor here, and the overall moistness, smoking characteristics lends it to having more in common with hookah tobacco. I did not detect the Perique, and the Virginia rarely pops up to make itself known. There is something wrong about this blend.