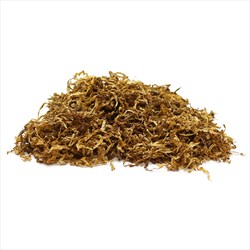 Similarly to the Kendal Gold Liquorice I reviewed a few days back, it's quite coarse for a shag. The moisture's good, and the pouch has a clean smell of blackcurrants.

Now, I'm confident this will please many smokers, the blackcurrants aren't too false, but rather 'true' tasting. They're just a little too strong for me; by the nature of the fairly sharp flavour of blackcurrant a tobacco only requires a small amount, IMO. Something else subjective is tongue bite, it's far to snappy. Although it burns consistently the resulting smoke's too warm. I also recommend this in a bigger bowl otherwise it's over too quickly; not that a long smoke of K.G.B. is appreciated by me!

The room-note's nice enough, and the nicotine's mild to medium.

Gawith, Hoggarth & Co. Kendal Gold Blackcurrant? Not for me.