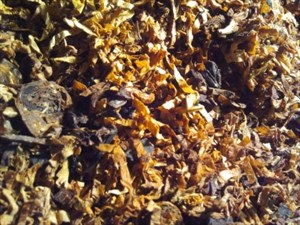 A pleasantly soft savory blend based on Virginia and perique and black cavendish. A touch of latakia make this mixture very exciting.

For lovers of unspoiled, natural tobacco mixtures, this blend will also appeal to people who don't like Latakia at all.

The Virginias are a little citrusy and grassy with some earth and fermented dark fruit. They form the base of the blend. I also believe they are responsible for the mild floral note. The spicy, raisin and plumy perique plays a supporting role. The unsweetened lack cavendish adds a very light sugariness to provide a slight smoothness to the blend. The smoky, woody sweet Cyprian latakia is a tad more than a background player, and continually underscores the experience. The nic-hit is a step closer to medium than it is to mild. The strength and taste thresholds are also a little closer to medium than they are to mild. Won’t bite or get harsh. Easily burns to ash at a moderate pace with a savory, floral, mildly sweet flavor that also translates to the after taste. Has some nuances that waft in and out as you go along, so there is a little inconsistency in the taste. Leaves virtually no moisture in the bowl, and requires an average number of relights. Can be an all day smoke. Three and a half stars.

I basically agree with Jiminks in the evaluation of this blend, although I am not such an elaborate reviewer and fine a palate. To me, the base of the blend is sweet-sour and earthy. I can also feel a very decent sweet topping, probably given by the Cavendish. I cannot identify the Perique, but that's my problem, I have never been able so far to distinguish the actual taste of Perique in any blend. What indeed puzzles me is the Latakia, which I can't taste at all. I would rather say there is some Kentucky in here (but there isn't, apparently). So I suppose the very sparsely added Latakia could be responsible for some of this earthiness I feel, but I would not consider this to be an English or Scottish mixture, rather a natural-tasting blend. Anyway, I like it very much, and I subscribe the three and a half stars.

A genuine blend! Me, as I don't like Latakia at all (besides Vauen Zeppelin, which is a tad like the aromatized brother of this one, as it's similar mild Latakia aroma) wanted to try this out of curiousity and the will to find a good side on Latakia.

Well...I was really surprised by this one! The smell from the sample baggie did already hint towards Latakia being in it, yet it diddn't turn me off - unlike most other "full english" blends. Gentle sweetness, slightly sour-fruity + a herbal, smoky Latakia scent.

On first light I got hit by a (delightful) blast of very herbal and ethereal smoke that got milder shortly after. The Latakia is definetly noticeable, yet so well spun into the flavor that I like it a lot! It gives ethereal herbalness, dry-woody notes and a slight smokiness. Underscored by the Virginia and Perique in the blend, which contribute slightly sour fruit notes, citrusy freshness and mild sweetness. The Cavendish adds a "toasted" feeling to the smoke as well and assists the Virginas honey-ish sweetness. Full-bodied spice throughout the bowl, that's not overwhelming tho. Medium in strenght, full in (and of) taste. Burns excellent, no flaws, no dull spots.

Oh...what a smoke this is! I finally enjoyed a Latakia blend - a lot! The Latakia is always detectable, but has a aroma unlike any other Latakia I tried up to this point. Maybe it's because its Cyprian Latakia as Jim mentioned above. It's really not obtrusive, it's deliciously smooth and not musty at all. I almost find it to give me a very slight "mint-like" feeling from the very herbal/ethereal tone of it. Sounds strange, but it's pleasing moutfeel

Highly recommended for proper English fans, who want a mild (in terms of Latakia) english blend as a enrichment for their english rotation, as well as to lovers of Va/Per mixtures with some decent spice and herbal-smokiness to it. Also a great entry for someone who wants to try Latakia for the first time! 4/4 stars!