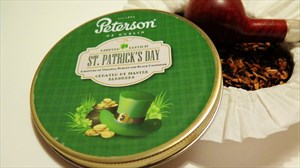 St Patrick's Day 2017 is a blend of rich Virginias, burley, and black cavendish, with an added vanilla flavour.

I was initially impressed, when I opened the tin the moistness was impeccable. It didn't look like the usual vanilla aromatic, it's not mainly black Cavendish with only a sprinkling of the others. Actually, the black Cav' accounts for the smallest amount of the blend, it's the Burley and Virginia that form the bulk of it. There's a fair few larger leaf like pieces in the tin, amongst a blend that's mainly composed of coarse ribbons.

My ongoing thought when smoking this is one of how different to most vanilla blends it is. For starters, the Burley gives the majority of the natural flavour, with support from the Virginia, instead of the sticky black Cav' hogging all the room. The vanilla is noticeable, but not gloopy; at all. The lighter flavour of the Burley/Virginia make this slightly more 'refreshing' than the usual vanilla aro's! I don't get any bite from the smoke but I would like it to be cooler; this reduces the rating.

The nicotine's mild to medium and the room-note's quite nice.

This isn't bad, but I want more weight in my vanilla blends!

Out of the tin was quite dry for an aro. Whether is was due to me amoking1 it in a meer' i dont know but the supposed vanilla taste was only on it initial 5/6 mins. A mild viginia taste with the typical petersons Cavendish. Not a bad bacci but not for those wanting a bold aro taste. Edit: have tried smoking it more freight-train like and the flavours come through better. Little to no bite. But if i had to choose I would def go for the previous year's blends.

I get notes of citrus off this, in reality it really tastes like 2015 St. Patricks day that they turned into founders choice - just in this case they didn't do the cube cut. It's like the topped it with a mango rum.