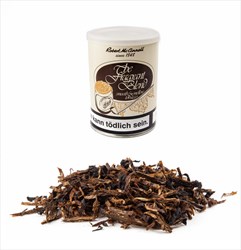 The first ingredient in this blend is a broad leaf Virginia which has been cut straight out of a 16 lb. block matured under cold pressure for two weeks. Added to this is a jet black cavendish, shiny and enriched by pressure and heat. Mottled red Virginia and an equal portion of dark brown maduro then complete the blend. The whole is then passed through a copper cylinder where fruit essences are added and sealed into the tobacco by contact with the copper stove. The blend then lies 'bulked up' for a further week when the various flavours intermingle to produce a unique blend. Smooth and very long lasting.

Although no longer produced (due to the difficulty in obtaining the necessary components) I did squirrel away a few tins a decade or so ago before McConnell spit the bit. I really like this one as the Virginia/Cigar Leaf and particularly the mysterious topping all combined to make this a really fun and satisfying smoke. It is an aromatic, but in the very subdued English style. Lots of tobacco taste and even a bit of strength - along with the mysterious sweetness, of course. If you are a fan of the less typical American aromatics of today, grab an old tin of The Fragrant Blend if you can find one.

I don't think I need to finish the tin to review this, as its pretty basic and monochromatic. Very old tin - around 1995 - but I doubt the aging did it much good. As a sidenote, this is still being produced by K&K but my tin was made in the UK by, I think, Robert McConnell.

Very light fruit taste here that serves as a light sweetener to a very bland batch of virginias and cavendish. Maduro? Didn't taste any. Didn't taste much of anything, to be honest. However, as an aromatic, the quality of the tobacco appeared ot be high. In other words, Ashton did not oversaturate the sauce in order to disguise inferior leaf, but I do think they purposefully used a bland concoction in order to make this an "all-day" blend that won't offend. In that, I suppose they succeeded but if you're after some flavor with your sweetness, you won't find it here. Nice room aroma - very natural in its sweetness and not overpowering like a lot of aromatics.

As a sidenote, Bill Taylor of Ashton has recently died. RIP, Bill. Thanks for the great pipes and thanks for Black Parrot and Old London Pebblecut, if not this blend.

Since I currently live in Germany, I have been able to order this blend online. I would describe Robert McConnell's - The Fragrant Blend as a decent summer smoke. It might pair perfectly with a Radler or shandy at a terrace during a sunny day. It can also be a good beginner's introduction to the world of non-aromatics, since it's very mild and complex enough to arouse interest, although I would describe the nicotine content as moderate. Nonetheless, it's not as overpowering as other cigar leaf based blends I've tried, specially at the end of the bowl. I suspect the room note might be pleasant enough and could be a good social or wife-friendly smoke. Easy to pack, to light and to keep lit. Moisture content is quite good right out from the tin, but it might benefit from a bit of drying time. This broken flake evolves down the bowl. It starts off as a very citrusy hay-like Virgina blend. Very sweet and refreshing indeed. At first, I was not able to taste the cigar leaf at all. During the second half of the bowl, the Black Cavendish starts to kick in and the Virginias turn darker and "breadier" in terms of taste. Still no traces of cigar leaf. Finally, one is able to discover the cigar leaf right at the bottom of the bowl, as some kind of special treat. It's as if one has to look for it in order to find it. That is to say, the cigar leaf is there, but, as I said, it's not obvious or overpowering. Overall, it leaves a really pleasant aftertaste that lasts for quite a long time. This blend might require more than one bowl in order to fully appreciate its intricacies. It's not simple by any means. I would recommend it to any pipe smoker, but I don't consider it to be an all year round smoke, although during the summer it could be smoked all day long.

Age When Smoked: Smoked right out from the tin

That is the second McConnell reproduction of a former Ashton tobacco that I tried and again I am in love!!

That is a very delicious tobacco and easily receives 4 stars. It´s a fantastic grade between natural tobacco taste and the right amount of fruitiness and reminds me a bit of Rattrays 'Dark fragrant' (but with less licorice, more dried figs/raisins). The tobacco has some spiciness and the fruitiness is more that of dried fruit, no citrus etc. It burnes down cool, caresses my tongue and needs exactly one match for the entire bowl. Works best loosely tamped in a bigger bowl. For sure I will buy a couple of tins and won´t allowed myself to stay without this stuff at home.

If you like english aromatics with a good amount of tobacco taste, a bit of spiciness, the taste of dried figs and a subtle licorice note - buy it, smoke it and I think you won´t be dissapointed.

At first I was reluctant to smoke this tobacco, because there were a lot of quite negative reviews. After smoking a few pipes I had to review my opinion About this blend. If you start the smoking of this blend at a slow pace the quit dull looking taste is evolving in a quit complex mix of sweet and nutty flavours. Towards the end of the pipe the sweet sugar of the va is coming at the end rewarding your patience. In fact this tobacco is a good va with a nice aftertaste.

This is some kind of a different "aromatic" tobacco.

The fruit aroma is added not as the last step of production, but during fermentation. This makes the aroma more powerful and lasting.

Anyway, I think that the taste is terribly bland: this is a tobacco which is much more pleasant to smell (in the can or by smelling the smoke in the room) than to smoke! It is very sweet and pleasant to those around you! Some friends described the aroma like a mixture of dried plums, apricots and peaches... and a non-smoker said, upon sniffing the can, "Wow, can this tobacco be chewed? Its smell makes me hungry!"

For the smoker, though, the taste is gentle but completely uninspiring. The fruit taste is barely perceivable, but at least the tobacco doesn't bite like other aromatics like some Amphoras. As a whole, a very disappointing experience.

Important warning: you may not want to smoke this in your best pipe, or in the one you use for english blends! It leaves a very sticky, almost sirupy, remain in the bowl, and its remaining aroma might spoil the taste of the english blend. There's an exception... I tried to smoke some Early Morning Pipe in the same bowl I have been smoking this Fragrant Blend: well, the experience was astonishing! It seems that the medium-mild taste of Dunhill's popular tobacco gets an extra boost from the remaining sweetness of the Ashton: the result was a smoke that contained all the subtle and pleasant nuances of EMP, but further emphasised and more rounded! The fruit aroma was barely perceivable, but it added an extra sweetness that married perfectly with the english taste of EMP! It's the only interesting use I can find for this expensive but dull Ashton blend...

2018 update: I tried it again after so many years, now that it bears the Robert McConnell name. Well, it is much less flavored than how I remembered. Still fruity, but of a fruitiness that could almost be mistaken for the natural sweetness of ripe Virginias. It actually isn't bad at all: yes, it still tends to be a bit boring, and evolution in the bowl is not its strength. Still a bit too mild, still too much Cavendish. Still not exciting, but it has a certain charm and finesse that rewards slow smoking. Absolutely not bad, simply there are more exciting alternatives. Rating raised accordingly.

I did like The Fragrant Blend a lot! Delicious tin note of tangy red Virginia topped with a nice fruity essence which does not smell chemical. Good sign! Comes in broken flakes of red and black hues almost half and half. The tobacco is slightly moist but I found it smokes just fine without any drying.

I cannot put my finger on what the added essence is, I’d say citrus and cherry, but I really can’t tell. It comes through though only mildly, it is sweet, but it does not taste chemical and it does not mask the underlying tobacco. Now the tobacco itself is great! Tangy, juicy and brisk red Virginia taste which reminded me a little of Scottish Cake and a slight sweet Cavendish-smokiness as well. Overall quite complex. Strength is medium as is nicotine content. It’s also smooth but with a nice citrusy tang. No tongue bite to me. Also, room note is quite aggregable. Can serve as an all-day tobacco. As for the cigar leaf, I could not sense it.

I recently had Robert McConnell’s Old London Pebblecut which is also a good quality tobacco but was not very much to my liking. The Fragrant Blend I do like a lot and I find that it has an identifiable McConnell’s house style which I found in Scottish Cake and Mature. I wonder why, if they are capable of producing so nice natural-tasting flavoured blends, they flavored their Red Virginia with something that tastes chemical…

First thing first: the producer is still Kohlhase & Kopp but the blend is now labeled McConnell instead of Ashton, having read the reviews of the former blend I’m not sure if it still is exactly the same or not. Anyway, TFB is a ready rubbed composed of Black Cavendish and Virginia (Maduro? Where?) quite dark in color, the smell in the can is an undistinguished fruitiness, it is rather pleasant although not great. Unluckily good things end there, where it falls short for me is the taste, not disgusting but criminally boring (for the price) with just a little amount of sweetness and some bitter-sour notes (read cigarettes) from time to time. As a general extenuating, it smokes rather cool and is absolutely inoffensive to the tongue.

Disappointing. A flavored mixture, extremely elaborate, that doesn’t produce the expected results. Yesterday I finished my 100g tin and now I don’t remember the taste. Peculiar, fruity, sugary but anonymous. I think if you like flavored mixtures and aromatic tobaccos, you have to give it a chance. However, in my opinion it’s nothing special. For these reasons, in my personal rating system (from 1 to 10) my score is 7 and two stars.

I like this a lot. It is in my rotation: the fragrant bland, langue de chien, marlin flakes, elizabethan mixture, chieftain islay mixture, stonehaven mostly use corncobs pipes