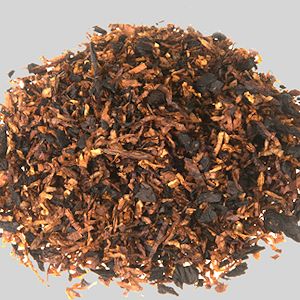 A full flavoured blend with fire-cured cavendish added for mellowing the robust burley. A mild cherry flavoring and a dash of vanilla is added for a semi-sweet, pleasant, slow burning smoke.

The first thing I noticed, and didn't like, was the chemical pouch-note. It appears to be quite a rugged construction, including some coarse broken flakes, big leaves, and sadly a few twigs. Mine was only a little too wet, but still smokeable fresh.

I don't know if maybe my expectations were to high but it seems like a basic cherry and vanilla aromatic. I find the cherry outweighs the vanilla, more so for the beginning of a bowl. Subsequently, the cherry still leads, but the vanilla becomes slightly easier to ascertain after the first third. I've had some wonderful blends from 4noggins, both aromatic and natural, but if I'm honest the cherry in this tastes far too chemical and false, with an overriding sweetness to it. I get little from the tobaccos, to me this is a red-blooded aromatic. On the plus side I get no bite and the temperature's cool!

The nicotine's mild to medium, and the room-note's good.

This isn't awful, but not my type of blend.

I was tipped off to this by a forum member at pipesmagazine the day it hit the site. Being a big fan of the original, I was curious and gave it a go. I took a bowl of the original and bowl of this in MM cobs and puffed them side by side. The 4-noggins blend is probably the closet to the original as it might get. I do feel like many of Tewksbury's blends carried a consistency in flavor but I'd be damned to know the difference if you switched them up on me. 4noggins HWM has the same wonderful burst of flavor and just the tiniest amount of sharpness I love in the original. I hope to see the Tewksbury folks back in the game soon but till then I am buying this! great job guys.

When I first opened the bag and there is a sweet smell but not really "cherry." I should tell you that I have had this for about 6 months. I smoked it right out of the bag and I have tried jarring it up for awhile. I have had the original "Hobbit's Weed" and this is not as cherry flavored as that was. Drying it out a bit seems to help bring out the sweet flavor and the smell of the tobacco certainly improves with age. I have not noticed any of the "chemical" attributes which other reviewers have noted and I am usually pretty sensitive to them. As for the way it actually smokes? I usually load my pipe the night before, let it dry overnight and the next day I find that it still requires one or two lights to get going and, usually, a relight or two. The flavor is sweet but not very "cherry." It is a nice aromatic, fairly mild, with a pleasing room note, so my wife informs me. It can be an all day smoke and I frequently use it while driving on the weekends as it is not overpowering in small spaces, like my truck. Plus, I just like being able to say that I am driving down the road, "smoking some weed!" LOL I do recommend it if you are looking for a mild aromatic with a pleasing room note.

Age When Smoked: From fresh out of the bag to about 6 months

Flavor was consistent throughout the bowl. Sipped slowly so as not to bite. No real highs or lows. Strength is very mild. Decent smoke. Probably wouldn’t buy again. Received compliments on the smell. Enough said.

I can’t compare or say if this is better or worse than the original because I never had the chance to try it. That being said, this is a very pleasant tobacco. Not very artificial tasting and very light on the cherry. Vanilla is nice and creamy in this one as well. Room note is amazing as well and received thumbs up from the wife and daughter.

Yeah nah!!! I find myself only smoking half a bowl...I grow tired of the chemical-like flavouring. It's not as smooth as I would like. Just longing for some more Cult Blood Red Moon.

This was very chemically compared to the original, and didnt have nearly the subtle cherry flavor of the original, nor the aroma. Save your money, the original Hobbits Weed is still gone for right now.

This is my first review and I must confess that I will be reviewing based on my personal preference. I bought 8oz. of this with the intention of smoking a bit and sending a lot to people, as I am Canadian and for some reason Hobbit's Weed is regarded here. I like aromatics. I don't like cherry. I work in a candy factory and this tobacco smells like work, and work reminds me of cheap kiddie carnival vomit. The vanilla is pleasant but the cherry just reminds me too much of cherry flavoured hard candy drops usually given out during Halloween. To try and be fair, it is by no means an offensively bad tobacco overall, it is just offensive to my personal palate. I sent some samples out as well as a few others in my cellar to random people in the tobacco community and did a contest on a Facebook forum to give away the rest, as there is no way I will be smoking this. Personal rating is a 1/5/ More professional rating, for lack of a better term, would be 3/5. It, like everything, is certainly worth trying but for me, it is worth trying once.

Well ole Frodo may smoke this blend and like it but it's not a big fav of mine. Again another aromatic that is mild and weak in taste. Smells nice upon opening with a nice hint of cherry. Burns OK for an aromatic and does not seem to smoke too hot. The cherry flavor is slight and comes and goes. I am not a big cherry blend lover but this is pretty good blend as tobacco flavor goes. If your looking for a cherry flavored smoke this may not suit your taste buds but as a simple nice tobacco flavored smoke this is a keeper.

Fair warning, I never tried the original Tewksbury Hobbit's Weed before it went off market so this is not a review about that at all.

What I can say is that this is a very fine cherry-vanilla blend and in many ways it reminds me of the one and only other cherry blend I enjoy, Cult Blood Red Moon. Now BRM is more of a sour/tart cherry flavour by comparison to this (and apparently has chocolate notes in it as well?) but in both instances, the cherry is what really comes out in front flavour-wise.

I went at this pretty aggressively and didn't experience any significant tongue bite, which I cannot say for some other aromatics I've tried, even the famous Lane 1Q.

Definitely a dessert blend and definitely one you will want to try if you're looking for a flavourful cherry aromatic without the bite.

I would add that I am not a regular aromatic smoker. I tend much more toward things like Plum Pudding, 965, Father Dempsey, as well as the famous crossovers like FMC or, now, Plum Pudding Bourbon Barrel Aged, so when I do want to go with an aromatic, I want something that has strong flavour and doesn't bite easily or hard. I would put this Hobbit's Weed Match into that bucket for sure. In fact I think it actually does better than Cult BRM in this regard and the flavour doesn't get ashy toward the end of the bowl like BRM can. A definite plus.

I could see this replacing BRM as my "go to" cherry blend, though the sour cherry angle of BRM still has its own merits of course, but overall, as I think about it, I think this one is the better of the two blends with less bite and flavour that lasts to the end of the bowl.

I knew going in that this had cherry flavoring, but I guess I was hoping for a more subtle application than what we get here. Somebody also mentioned banana nut bread, which I like, so that was another reason I wanted to try this. My first evaluation over a year ago noted a sweet confectionary aroma and a flavor that reminded me of a Luden's cherry lozenge. No banana nut bread for me. At least it burned cool, was not as sickly sweet as Ole Shenandoah Appalachian Berry, and left no goopy residue.

To reduce the overt cherry flavor I tried blending half n' half with some Lane White Burley, then some Orlik Golden Virginia, then some Edgeworth cube cut Burley, and no matter what I paired it with the candy taste dominated (plus I wasted a lot of good tobaccos in the attempt).

Now, a year later, after being untouched in a mason jar, I gave it one last chance at redemption. The jar note was of overly ripe (almost rotting) black cherries, while the flavor had now taken on an unctuous combination of fruit cocktail syrup and cream soda. It must have had a good dose of humectant because it was still moist enough to require some drying out - though that did not help diminish the unctuous flavor.

I'd say I've done my due diligence with this one. The remainder of my supply goes into the compost bin!

EDIT [I decided to knock this down to 2 stars. It became just too much of a strict cherry product that was beginning to ghost the pipe and began tasting of a cheap bulk blend].

I recently made a batch of do it yourself Hobbit's Weed from the online recipe and was quite pleased with the results, so upon placing a 4noggins order, I thought I would see if their blend differed much (though I'm likely smoking the same thing).

The bag aroma is much heavier on the cherry juice, leaving no room for any of the vanilla or other flavors to weasel into your nose. Still, it was a great smelling cherry. The mix was the same equal parts of Black Cavendish and Burley, though the leaves were paper thin (like fish flakes). Ignition couldn't of been easier and the bowl had zero relights, which meant a hobbit could wander away from the fireplace, never needing a lighter. The taste (for an Aromatic) was phenomenal. The cherry was still in the forefront, but now some of the sweet vanilla was able to creep in.

I have to say I preferred 4noggins take on the weed versus making my own, for being less hassle, slightly better tasting, and being one of the best burns I have ever had.

Just tried this for the first time. Super smooth, could smoke this all day.

If you enjoy aromatics this needs to be in your pipe.

I am looking for a berry flavored aromatic to add to my rotation so have been trying different blends that have been recommended. I enjoyed this blend but the flavoring was a bit heavy for my taste.

Age When Smoked: When Purchased