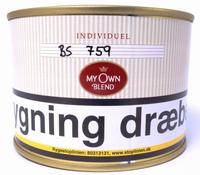 Balkan Sobranie style from My Own Blend's version of the Balkan Sobranie 759 (the one in a gold and black tin). 100 grams of classic English mixture of latakia, Virginia, dark fired and cavendish.

I drop by the Danish Pipe Shop in Copenhagen last week and picked up a Castello 55 while I was there. The gentleman there was one helluva saleman because I had no intention on buying a pipe when i walked in. Such is life! (I forgot his name but his grandpa started the store). He turned me onto this “My Own Blend BS 759” as an excellent blend to break in this pipe with. I can’t say i’ve ever tried MOB, but he strenuously recommended it as an excellent full Balkan. Being a student of the Balkan genre and a lover of full tobacco blends, I jumped on his educated recommendation. I like to call myself “well rounded” with different incarnations of the old Balkan Sobriane 759 and it’s cohorts, so there was a slight feeling of scepticism creeping in as I walked to the cash register. It wasn’t long before it made its way into my new pipe. What struck me first is the fine cut of it and the overpowering campfire latakia smell. There was no doubt it would be tasty based on how it smelled alone. After a dozen bowls now, I can safely say that this tobacco is nothing short of superb. The complexity of it makes smoking my new pipe so enjoyable. Something so layered forces me to slow down and deconstruct the blend and then everything else around me. BS 759 stays close to the mix bag of tricks all Balkan 759 replicas provide but I like it better than two big replicas that come to mind: Black House and Abingdon. Their cuts make continuous smoking more difficult although the taste is quite similar. BS 759 leaves a wondeful aftertaste, reminding you of the powerhouse you just smoked. I’ll admit, sometimes the stories surrounding the purchase of a blend give it a boost on the critic-o-meter, but let me reassure you that this one stands on its own for pure, sweet and sharp Balkan goodness. Enjoy with your favorite beverage.

Very interesting mixture, I’ve never experienced the original BS but as a EM lover I find this one by OLSEN a very fine blend. Not too strong, no bite, no Latakia overload. A good all day.

Thos is probably the finest Balkan blend I have had the pleasure to smoke. I have never been fortunate enough to sample the blend that this seeks to emulate, but if the original was in any way similar, then I mourn its passing.

Tasty throughout, with a sweet smokiness that belies comparisons with most others - Star of the East or McClelland's Wilderness would be the closest. Browns and blacks, and fluffy and not too moist. No relights through the bowl, and little residue. Just a delight from first light to the end.

Long may it reign!

I revisited pipe smoking about a year ago, after an earlier attempt decates ago. Started of (again) with aromatics, but inspired by the numerous review on YouTube, I soon started trying Virginia, Vapors and Burley blends and straight tobacco's, with the Virginia's as my favorite. But I all so smoked occationally some Night Cap and Standard Mixture. Now In recently purchased a tin of MOB BS759, and I'm hooked on it. It is my new favorite!

Pipe Used: All my favorite pipes

Age When Smoked: Couple of months

Similar Blends: I highly recommend MOB BS759. It has some smoky sweet gorgonzola-ish taste to it. I recon that it something to do with the Orientals., I hope that a more knowledgable pipe smoker Will try this blend, and van give some reflections. I like to know how it compares to the real BS Mixture..