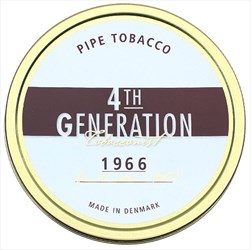 1966 blend (taking its name from the birth year of Erik Stokkebye's younger brother) mixes mature Virginias, burleys, black cavendish, and a pinch of latakia, all topped with a dash of Caribbean rum.

The rum element really does come through, even with the presence of the Latakia which is hard to accomplish properly in a lot of blends, but handled well here by Stokkebye. The Virginia is also of good quality and had no rough edges, which is unusual for fresh leaf. And finally the rum soaked Black Cavendish was actually a body builder, so, this one had some palate filling capabilities, too. Just a very nicely done blend.

Before I get to my "TIRADE" , here is my review: Not being a fan of The Latakia/Rum combo, I'm really scratching my head why I tried this. That said, this is the best I've tried. I did have to let this breathe for a few weeks in order to reduce the rum influence , then this blend shined. It tends to lean towards the "sour" rather than the "sweet" side and it never has a bitter background note that I get from other Rum topped blends. I would put this in the aro camp and I found that a cob is better than a briar

NOW MY TIRADE: I will never buy any of this manufactures blends again simply because of principle. When you look closely at the weight of the tin , it's only 40 grams, deceptively packed in the standard 50 gram tin. I will not personally support this trend

This is another blend that I had never smoked until receiving a half ounce sample/gift from an Ebay seller with whom I had made purchases recently. When I gave it the sniff test, it came off as a lightly aromatic blend with some Latakia content and neither was all that strong. I looked up the formula on this site and, sure enough, that is what it was. I first smoked this blend while visiting a longtime pipe smoking friend; an environment that often thwarts truly understanding what a new blend is really like. In the middle of our conversation I began to say things out loud about how good this tobacco was smoking and how much I liked it. It has been all uphill from there. I don't know whether the aromatic component is truly rum or not and I don't care. The top third of each bowl smoked in such a way as to slow my pace down by mild tongue warming and I made the adjustment willingly. When a blend is as interesting as ES 4th-1966, you can ignore and\or accept quirks of blending; you can ignore a mild amount of heat in initial light up. When I finished smoking my second bowl I exclaimed - "What a beautifully crafted little blend this is" - and that is, in essence, what the only other reviewer at this time, Pipestud, said in his review. Once again he and I agree on a blend at four stars.

Purchased From: gifted by an Ebay seller

Similar Blends: I'm not sure, as there are so few aromatic English blends on the market. It reminds me of some aromatic English mixtures that I have put together in the recent past rather than anything commercial..

When I opened the tin i promptly thought Solent Mixture!! Same smell same cut same ingredients. Even the cavendish is described as Original Cavendish, as in Mac Barens description of old. I swear both tobnaccos are indentical!! Do anybody know where the Eric Stokkebye tobaccos are manufactured? Great tobacco, see my review of Solent Mixture but not worth the extra money

This is my fourth review. I have been smoking pipes for a few months, and cigars for a few years.

Cut is pretty conventional ribbons. Tin note is mild but pleasant: a hint of rum and Latakia. There's not much of the latter; my pipe-smoking friend, who is not at all a fan of Latakia, detected it but didn't find it unpleasant. More of the rum note comes out on smoking, but it's not overwhelming. This was pretty easy to light and keep lit, and it burned down pretty well.

This stuff is good to keep around. It's not mind-blowing, but it's not troublesome, either.

The description says this is ribbon cut but it's not. It's a mixture, my tin contains a few rather large pieces of broken flake. The rum comes across with certainty in the tin's aroma. My blend's hydration is spot on.

The Latakia takes until about halfway in to gain applause, up until then it's an exceedingly light addition. The VaBurs and rum form the main flavour up to there. The rum comes over as being definitely rum, there's alcohol, and molasses, not just some nebulous sweetness, which can often be the case if it's not 'sloshed' into the blend. The burns reliable enough, but can become too warm should I puff my pipe with lots of vigour.

4th Generation 1966? I suppose it's not all bad, but I wouldn't add it to my rotation. Somewhat recommended:

Generally, I agree with the other reviews here.

However, my recommendation is to smoke this in a hookah or a bong.

Simply put -- it burns unacceptably hot. I spent a considerable amount of time trying to adjust my pack to enable a cooler and more reliable burn to no avail.

My solution: Smoke it from a hookah and its colors really come out.