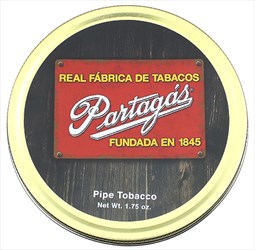 Partagas pipe tobacco combines burley for nuttiness, black cavendish for sweetness, and latakia for smokiness, resulting in a blend that takes an English-aromatic crossover direction in its components, but goes without any additional topping.

The ribbon cut mixture's half and half dark to medium brown. The moisture's great, and the ribbons are slightly coarse.

When I lit my first bowl I was imminently impressed by a certain quality: the thickness of the smoke. I always enjoy a smoke that's really palpable and that's exactly what this is: a very thick, heavy, and almost tangible smoke. Need I point out that it's a good idea to have a window opened! Regarding any aromatic side, I don't get too much; I get more of a well-balanced taste of the tobaccos'. There's not a massive waft of Latakia smoke, Burley nuttiness, or too much black Cavendish sweetness, it tastes exceptionally proportionate. I get no tongue bite from it, the burn's quite cool, and once lit it's self reliant.

The nicotine's mild to medium, and as I implied at the start, the room-note's heavy!

I hate it when there's only one review to date and I give a completely diametric result; I either sound like an argumentative cretin, or a freak, but I really like this!

I purchased this tobacco in August 2016 when pipesandcigars.com loaded their site with tons of new products they wanted to get to the market before the then new FDA laws took affect. I didn't know what it would taste like, had not heard it was being introduced, but figured for the price, a couple of tins couldn't hurt, just in case it would never be available again. Opening the tin, the Latakia jumped out and I thought I had made a mistake. Don't get me wrong, I'm a Latakia guy, but some blends just have a bit too much. I fired up half a bowl, and was I ever wrong. Like most new tobaccos, the initial few puffs were different, but not bad as I tried to "feel out" the tobacco mix. Then around 3-5 minutes into the bowl, lots of good flavor and body started coming through. There is a real natural sweetness from the Black Cav that marries just right with the Latakia and Burley. The tobacco had just the right amount of moisture and it burned consistently and nonstop after the initial light. Just a little bite, but nothing major. It finishes well and there's not a lot of aftertaste.

Over a year plus time frame, I took it out of my cellared stash and it's even better now that the tobaccos have had time to settle. Would be a great starter for the person just getting into English blends. I tried an experiment with some Hearth and Home Stogie and it gave it a little more body and offered a really nice change of pace smoke. It's in my rotation both ways (by itself and with the Stogie mixed in).

Again I agree with StevieB in near everything.

There is something we have to made clear before nothing else. As "Partagas" is a Cigar brand, somebody could expect a Cigar Leaf based blend, and IT DOESN'T HAVE CIGAR LEAF AT ALL.

I would classify this blend as a clear example of the so called "SWEET ENGLISH" blend. It's not exactly what you expect from an English blend, but it's not an Aromatic English at all, as I cannot detect any topping.

It's a very well balanced blend. For the english blend smoker can be a kind iof sweet dessert after many spicy bowls. For the aro lover, it's a must try as very pleasant introduction to straight tobacco, English blends or latakia.

Excellent light English mixture. None of the tobaccos used in this blend are overwhelming as far canceling out the flavor of others. I would call Partagas one hell of a balanced blend.Medium strength makes this a fabulous morning smoke far superior to Dunhills EMP. Absolutely delicious with strong black coffee.

Man did i want to like this. My favorite cigar is making pipe tobacco? It worked for Drew Estates.....so lets try it!!!

Wow this stuff is terrible!!!!

Tin note is smokey and sweet. A tad sticky but not horrible. Dry time is recommended.

Lighting the tobacco should have been an indication of how the rest of the bowl will be. Gross.

It became perfume like, and just stinks. Flavor tastes like it smells. Think of really bad car air freshener. I couldnt detect any type of tobacco. No sweetness. No nuttiness. Nothing.

I tossed the bowl less then half way through. It was making me sick just smelling it.