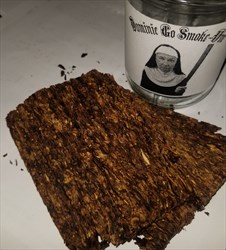 Sister Mary Ignite-us...the 4th Nun (and patroness of Pipe Tobacco!). A while ago some pipesters online ferreted out the original 3 Nuns Pre-WW2 Recipe. We took this as a challenge. although lacking the equipment necessary to create "Curly Cut" tobacco, this rough ribbon mixture utilizes the exact same ingredients and process as the venerable original. This is a very Danish-esque mixture of Burley, Bright Virginia, Perique and a small amount of what the original recipe calls "Manufactured Perique"- A cavendish processed virginia with Rum and Anise oil.

The blend is touted as using the original pre-World War Two Three Nuns recipe, which became available on the internet some time back. While they couldn’t quite duplicate the processing - the earlier version was a pressed small coin cut instead of a mixed ribbon as this is, and they couldn’t use the same sources for the tobaccos - the attempt is laudable, and is a tad more accurate than the Paul Olsen version. The bright Virginia has a little tart and tangy citrus, grass, and a touch of honey. Processed in the cavendish style, it forms the base of the blend. The burley offers a light nuttiness, a fair amount of earth and a little toast and wood, and at times, almost competes with the Virginia cavendish for the lead. In a lesser support role, the perique provides raisins, figs, and a more noticeable, though inconstant spice hit. The perique can fluctuate in importance once in a while. The “manufactured” perique, which was also used in the original, doesn’t amplify the presence of perique that much here. The anise oil and rum are mildly applied, and tone down the tobaccos just a mite. There’s no chance of bite or harshness present. The nic-hit is in the center of mild to medium. The strength level borders on medium, while the taste threshold sits squarely on medium. Burns cool and clean at a reasonable pace with a lightly creamy, fairly smooth flavor. This is a moderately complex mixture that, unlike the VaPer Three Nuns, has a very small inconsistency in flavor as a few aspects of the tobaccos may vary during the smoke, though the toppings even it out to small extent. Leaves hardly any moisture in the bowl, and requires an average number of relights. The pleasant after taste lingers some, and the room note is decent. It’s an all day smoke.

There are differences between this and the VaPer Three Nuns, which had a spicier edge. The raisin and fig notes from the perique are not quite as prominent, too. The Virginia had a little more depth and presence. A brighter Virginia is used here whereas the original used a slightly redder/orange varietal. The light dark fruit note is missing, and substituting a different burley for Malawi draws it away from the old manufacture just a bit. The depth of strength and taste levels do not quite reach the original. This is also mildly sweeter, chiefly because the toppings are just a little heavier in flavor. Experienced aficionados of the old recipe will know this is not the same, but there’s enough going for this production that VaPer smokers may find this worth trying for its own merits.

Watch City Cigar, The 4th Nun (2016 Christmas Blend)... said by WCC to be the recipe-reincarnate of the original Three Nuns - I can't attest to that as I've never had the profound pleasure. My impression is a good one - it's earthy, minimally sweet, w/a prominent grass & hay presence, some spice & mushroom perique sans plum influence, slight at first but progressive floral wood-nut undertone, burns phenomenally well. I detect no toppings, just all natural. Very complex in it's many separately discernible levels of flavor. Gets better as flavor intensifies while the bowl progresses - a gingerly applied tamp is optional, stays dry and finishes in a salt n pepper ash. I'd recommend a deep round bowl for this one if you want a long purely pleasurable creamy smooth billowy smoke.