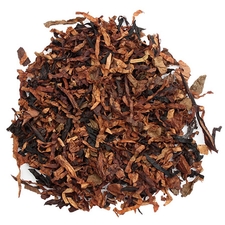 An exclusive, aristocratic blend from Planta, Mild English has a high ratio of Latakia from Syria and Cyprus and broad Virginia leaf. Blended by hand.

The combination of Syrian and Cyprian latakia offer a light sweet and savory quality along with a rich smoky, earthy woodiness, some mustiness, a hint of incense, and a very noticeable dry wine-like aspect. The grassy, lightly citrusy Virginia is a condiment, and is mostly buried under the latakias. The strength is just past the center of mild to medium while the taste is a hair short of medium. The nic-hit is almost in the center of mild to medium. No chance of bite or harshness, but does have a slight rough edge. Burns cool and clean at a reasonable pace with a very deep, consistent savory flavor, though it has little sweetness. Leaves little dampness in the bowl, and requires an average number of relights. Has pleasantly lingering campfire after taste. This is an all day smoke only if you are an experienced smoker, and is richer than the strength and taste levels indicate.

Sometime in the recent past I read online somewhere that Planta claims to have perhaps five years worth of syrian latakia in reserve.  Not sure if that's true, but as a fan of Planta's Full English blend, I thought I should try this one also while I could.

This blend lacks the java cigar leaf of the other.  The syrian latakia is the star of this blend ("dry wine-like" per JimInks is a great description).  The cyprian latakia is more sharp, campfirey and backs up the syrian but occasionally moves to the front for a moment.  I don't really get a distinct "taste" per se from the virginia, but find its presence thru a light, natural sweetness that stays in the background. This tobacco both smokes and tastes better if it's more toward the dry side so I recommend perhaps a half hour of air dry if you get a sample that's more moist.

I still like the Full English a little better, but this blend does a nice job of showcasing the syrian latakia imo.

The pouch contains a higher proportion of brown to black ribbons. A lot of the ribbons are fine to medium in build but as well as these Mild English includes a few bigger leafy pieces. The moisture's good and the unlit aroma's typically English. Mild English? A fitting name or a contraposition?

I don't find the name befitting until after about a third. The inaugurate part of a bowl is governed by the Cyprian Latakia, causing the smoke to have quite a sharp pepperiness. Once the Syrian joins in a smoky, leathery, note develops and it's here where the blend becomes a little more eponymous, although I still wouldn't necessarily call it Mild; MILDER, not mild, lol! The Lat' also has a slightly fragrant character, not too false seeming, but it has a spot of vibrancy. The Virginia's an exceedingly minor player throughout a bowl, it might as well be absent from the description, it's that way in the smoke! The burn from it? For best results it needs to be packed loosely. The temperature's low and I get no bite.

Nicotine: medium. Room-note: not too bad, for me.

I have been gifted a small zip lock bag filled with what I understand is a bulk only tobacco, sold in the US. Open to new things I though I would play around with it, and based on this little amount of tobacco (maybe 5 full bowls) I have decided to write a few lines. First off, the name is a bit misleading as this is a virginia/latakia blend and not an English. The nose is mild latakia-ish, although given the package and the amount I would not be able to say anything beyond that. Judging from the looks of it, a broad ribbon cut with lots of blond looking Virginia, one would expect a sweet Virginia forward blend; counterbalanced by the minority presence of a latakia. Again, misleading. The blend is quite latakia forward, which has a specific sweetness, only improved slightly by the Virginia. It is indeed mild, and here the name did the blend justice - we could call it mellow even. As far as the latakia presence, I wouldn't call it light nor heavy - as most latakia blends I have met in the past, but I would rather call it a mid of the road blend. It contains just enough latakia to make the smoke pleasurable, not overwhelming in flavor and nicotine, but at the same time not sufficiently faint to annoy one by it's lack of personality. It does contain some sort of sweet vinegary topping, if you pay close attention to the smoke, but it is a mute background presence which has little impact over the overall smoking experience.

All in all, I would't hoard this if I had a chance, but wouldn't mind having around a jar or two. Like I said, it contains a unique balance of latakia and virginia, with latakia being a mid of the road strength, and Virginia as a secondary supporting tobacco having little influence on meeting the smoker's expectation from a Virginia. The vitamine N is mild to medium. Moisture ... even though it may not feel wet to the touch, it does require quite some relights and leaves moisture in the bowl - quite punishing on the filter, but no bite what so ever - which is nice.

With the demise of Syrian, this has been renamed. It is mellow overall, but closer to medium than some of its mild competitors. It is a very satisfying blend offering terrific value at its bulk price. I like Light English blends, but many are a bit vague on taste and accuracy in the naming. This blend has bottom and should not be overlooked.

Age When Smoked: Fresh from bag.