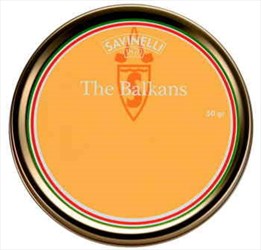 Black Cavendish, Latakia and a generous serving of exotic oriental tobacco. Spicy and at the same time flowery thanks to a small amount of various Virginias.

It's not a bad blend just a little bit bland. It comes cut in fine ribbons with the right moisture to get going. Tin Aroma is smoky as the Latakia smell dominates.

It lights fairly easily and smokes well but I find there's a lot of (unflavoured) Black Cavendish here to make an interesting blend. Latakia is also present but I do not think I can sense the Orientals. Strength is on the mild side of medium as is nicotine and room aroma rather innocuous, as is the blend overall. A mild English blend which is not bad but not very interesting either.

-- Time in the jar seems to have done good for this blend. It tastes much better now. A Black Cavendish enhanced English. Three stars after jarring.

Similar Blends: Not as interesting or complex but has some similarities to Black Mallory and Robert Lewis' Tree Mixture. , --After a second reappraisal I feel that The Balkans is as exciting as either of these two tobaccos, lots of Cavendish blending nicely with the Latakia, a whiff of sour tasting Orientals and some sweet Virginia. Excellent. Very smooth and tasty. Needed time....

Noticeable in the tin are Black Cavendish, lots of Latakia, some bright leaf: Orientals and VA. Despite the name, this is not a Balkan style Lat bomb, but more of a stout Scottish mixture. The leaf is a typical ribbon, about two thirds dark browns and black, with a good amount of VA and some Orientals in there.

Lighting is a one-match affair, and the smoke is bread-ish (Black Cavendish) with spice and smoke from the Lat and Orientals, most of the sweetness coming from the VA. Not much variation in there, but a great sweet-savoury smoke.

Uncomplicated, docile smoke with nothing but ashes left at the end.

Had I read Stefanos’ review earlier, I would have given it some time, as I don’t know for how long the tobacco had been in a glass jar to be bought as samples.

However, it is not a bad blend. Although on the sour side, it also rather sweet with a nutty aftertaste. Some Latakia is detectable as well, but I do not sense it as the main player in the blend. Compared to my later Balkan blends, this is rather mild, but suiting the season (I wish there was more snow).