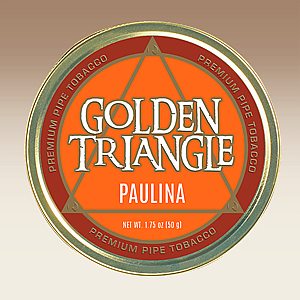 This varietal exhibits a flinty character, with a peppery sourness that you notice toward the back of the tongue. There’s also of bit of a coffee note on the retrohale. In combination with the base blend, these flavor notes become very noticeable. Golden Triangle Paulina gives you a flavor that's a real departure from what you expect from Perique.

Notes: The Golden Triangle Series of pipe tobaccos is a showcase for some very rare versions of St. James Perique. Mark Ryan, of L.A. Poche Perique Company decided one year to put up a barrel of Perique from each of the four growing regions of St. James' Golden Triangle, rather than mixing them together for processing. This experiment created four distinctly different versions of Perique. In the Golden Triangle Series, Russ Ouellette has created a base blend that is used in the four regional mixtures that allows you to be able to see the difference in the flavor of the singular Perique varietals. To round out the series, Mark has allowed us to offer a tin of straight St. James Perique (as opposed to the usual Acadian Perique), the first time that pure St. James has been offered to the public in many years.

A little nutty note from the Burley and a hay note from the Virginias form the base. A mild sweetness comes with it. This Perique is an odd one. There is an initial blast of pepper that stings the nose. It settles down after a few puffs and just becomes peppery. Nothing odd there, but then we get to the flavor. There isn't a lot. I get a light note that wafts in and out that reminds me of African peaberry coffee. It's very light and has just a hint of fruit to it. Other than that it has little else to offer except what I can only describe as a note that taste like clean dirt, if that makes any sense. Strange one there. I'm not enamored with the flavor of this one, but the blend does exactly what it is supposed to do and that is show you what Paulina taste like. 2.5 stars rounded up to 3.

Apparently, this is one of a series and had thought about buying them which appears from some reviews to have been around since 2016 but the price tag was a little hefty (for me). I saw this one in the latest pipesandcigars.com magazine in the clearance isle. I went online and looked for the other ones but guess they have all been sold by now. I thought what the heck and bought two tins. According to Wikipedia, “Paulina is an unincorporated community and census-designated place in St. James Parish, Louisiana, and located on the east bank of the Mississippi River in the eastern part of the parish” I lived next door in Mississippi and we actually had a fishing cabin in Louisiana when I was a kid. The tin note is that of sweet apricots and is a light-medium brown ribbon cut. I smoked a few bowls and tasted mostly sweet Virginia. Next day, I am smoking more of this and am waiting for Paulina Perique to announce herself and let me behold her presence. Still waiting and starting to feel stood up and getting tired of waiting for someone who I am beginning to realize is not going to meet me at the Prom. In all fairness, I tend to smoke a lot of Latakia and darker, stronger tobaccos and it is really hard for me to do an about face and try to detect the subtle taste that this perique seems to be. It is a good tasting smoke and maybe I was expecting a Perique Bomb, not really sure but unless you had the whole series, I do not see the point in buying this if you are a perique addict. I have to go 2 stars on this one.

I bought one of each of the Golden Triangle Series blends a year ago and opened 'Paulina' yesterday. I smoked some in a large bowl pre-Rep. Peterson System pipe and in a smaller bowl Connoisseur bent Dublin. Fresh from the tin the hydration level was perfect and I had two enjoyable smokes. Besides liking the over all experience, I appreciated that, from time to time, each of the component tobaccos made a brief solo appearance. The Burley was nice and rich. The Virginias were smooth and sweet. And, there was just enough Perique to tickle my nose without making my eyes water.

I was eager to try the Golden Triangle varietals and this was my first foray, unfortunately it is rather unpleasant. The taste in my pipe was stale and musty from start to finish in each bowl, in each pipe I tried this in. I put myself through a half a tin of this foulness before throwing in the towel, even though I disliked it from the first puff. Avoid.

Well if a "Golden Triangle" conjures up lewd blonde thoughts, naming the product Paulina won't tame those impulses. Ironically, the tin pops open to some musty smells (rotting Orange?), but in an enticing way. The paper-staining, light brown, near shag cut tobacco, is really pressed into the tin; so get ready to pull this bouncy puck apart.

Paulina is not too wet and immediately ready to go on the first date (OK I'll stop now), she sparks up instantly, into a satisfying smoke you can't help but inhale - turning your pipe into a quality cigarette. There were no additives detectable, rather Burley forward, with less of a Virginia hay taste, and more of a peppery chomp to it (as another reviewer pointed out).

So far, the Golden Triangle has been 2 for 2 with me, which probably means it won't be produced anymore as my luck goes, since I would buy it again.

After trying Belmont, my next choice in the Golden Triangle series was the light South Vacherie. But it turned out that the tobacco in the tin was completely dry, so I sent it away to be moistened. I had to open a tin of Paulina, although I'm wary of smoking tobaccos above average in the 30-degree heat. The Paulina was also a bit dry, but that wasn't what struck me. There was a distinct smell of tomato juice and salt, plus a bit of alcohol. "Not tobacco, but Bloody Marys," I thought, but I didn't smoke it right away, so I decided to moisten it a bit, too.

As I transferred the tobacco into the moistening jar, I had a chance to examine it. The color of the blend is light red to brown, and the different varieties of tobacco are easily distinguishable. Slicing - a small ribbon at Virginia, the rest is finely chopped. Because of the dryness, the tobacco began to fall apart, and I had to pour it into a large jar quite carefully. I still couldn't help myself and stuffed half a pipe, but I didn't feel anything great while smoking it. It tasted just like cigarettes - a bread note, a little bit of nut and pepper. "Okay," I decided, "we'll see tomorrow."

After a day of resting, the tobacco, became more moist and, in general, was suitable for smoking. But the smell had changed. There was no more simplicity and dominance of tomatoes. The tobacco acquired a complex bouquet consisting of notes of rye mash, dried tomato, allspice, dark chocolate and a slight hint of orange. The tobacco is easily puffed and compacted in the tube, being quite lush. It is very easy to light.

The tobacco flavor has also changed - it has acquired a bright peppery notes. There was also rye bread, fresh grass, a little bit of caramel, a little bit of walnut. Toward the middle the pepper weakened, the sweetness intensified, citrus overtones came, and there was a subtle hint of overcooked coffee. By the end of the pipe the tobacco became much simpler: sweet rye bread with a fairly distinguishable chocolate note.

The strength of the tobacco is above average. The nicotine kick is weak, but there is. The tobacco burns evenly, medium-hot, does not go off, but does not like the dense puffs. It leaves a little moisture in the pipe.

The ash is loose, dark gray, fine, but not dusty.

The smoke contains a significant nutty note along with a sweet herbal smell. It disperses easily and is quite pleasant.

The overall impression is that of a chameleon tobacco. It changes its smell and taste, which some may not like. It is also quite deceptive in its initial lightness, but quickly catches up in strength by mid-pipe. Overall, I liked the blend, but in the hot summer an inexperienced smoker should approach it with caution. I'm not sure if it will get better in a couple or three years, but I'll hold on to the second tin.