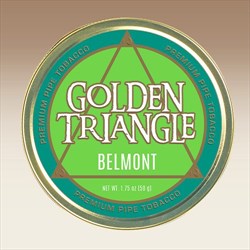 The Belmont varietal might be the most surprising. The aroma of the leaf reminded me of brined olives. There’s a butteriness and a bit of saltiness. The spice is bold, like Cayenne pepper. In this version, the creaminess is there with the pepper more noticeable on the finish, with the base blend adding some sweetness. Golden Triangle Belmont will give you a whole new concept of what Perique is.

Notes: The Golden Triangle Series of pipe tobaccos is a showcase for some very rare versions of St. James Perique. Mark Ryan, of L.A. Poche Perique Company decided one year to put up a barrel of Perique from each of the four growing regions of St. James' Golden Triangle, rather than mixing them together for processing. This experiment created four distinctly different versions of Perique. In the Golden Triangle Series, Russ Ouellette has created a base blend that is used in the four regional mixtures that allows you to be able to see the difference in the flavor of the singular Perique varietals. To round out the series, Mark has allowed us to offer a tin of straight St. James Perique (as opposed to the usual Acadian Perique), the first time that pure St. James has been offered to the public in many years.

A base of mildly sweet nutty hay as with all in this series. This Perique is very interesting. Not much flavor-wise, but it has a very creamy character with a touch of salt. The description is pretty accurate here. You can smell the brined olive in the jar, but it doesn't translate into the flavor. The creaminess is buttery, but not butter flavored. It's almost devoid of flavor except for an extremely mild fruitiness which I sometimes wonder if it's not imagined. The spice is in no way imagined. I wouldn't say it was spicier than any of the others, but it has a warmth to it that warrants the description of "like Cayenne pepper". This would be great for adding spice to a blend without much changing the flavor. 3 solid stars on this one.

The ingredients listed on the label were Virginia, Burley, and Perique. I like all of these, so I'm not sure how this was such an utter miss. All this talk of olives made me hungry, but I got none of it in my tin note, which reminded me more of raisins than anything else. I was pleased enough on the first light, and I got a decent bit of nuttiness from the burley, and hay notes from the Virginia, though the perique was condimental in the most conservative sense of the word. It was pleasant, not abundantly special, and short-lived.

This stuff burns with the combined heat of every known sun in the universe, and probably most of those yet to be discovered. Almost instantly, it leaves layers of fine ash that bore through clothing and flesh like white phosphorus. I'll give this one points for having the nicest mouth-feel I've encountered in awhile prior to my mouth bursting into flames, but overall this is a tough one to recommend.

I smoked several bowls of this blend in several different pipes, then gave the rest away. As much as I respect Russ and his work and as much as I like many of his blends, this isn't one of them. For me, the flavor just wasn't pleasant. In terms of the "brined olives" description offered by pipesandcigars.com's reviewer, I got, maybe, too much "brine." I tried to like this blend but it fought me every step of the way. Anyway, I'll bet Russ had fun creating this blend and the others in the Golden Triangle series (I haven't popped the other tins, yet.

I've been watching this series for a long time, wondering if I should get a taste of it. Unfortunately, all good things come to an end. Those barrels ran out, too, and Russell Ouellette wrote on his Facebook page just a couple of weeks ago that the series would no longer be produced. So, while I still have a chance, I decided to buy a couple of cans of each title. Alas for me! - Grand Point, considered to be the most successful variant, has already been swept off our shelves. But I managed to get the other four and after some deliberation, I decided to start by trying Belmont.

The tin had no date of manufacture data. The excise stamp had a reference to 2017, but I wasn't ready to believe that. The tobacco that was in the tin turned out to be dry, and I had to moisten it for a couple of days. During that time, it gained enough moisture to bring out the smell and flavor. The tobacco is cut evenly on ribbons, but not perfectly, tobacco is sometimes cut slightly wider. The color of the tobacco - a light brown with a woody hue, and darker flecks of perique. The tobacco is very soft and light to the touch, it is very easy to stuff. At the expense of the remaining dryness is very easy to light.

The smell of tobacco - herbal and bread Virginia notes, quite bright caramel malt, as from the ale, as well as hints of figs, peppers and prunes. The annotation says that the flavor of the perique from this blend is reminiscent of salty olives. And indeed, there is a certain hint of saltiness in the finished blend.

The taste when smoking - a pronounced bread, malt, a little plum, sweet peppers, almond note, which increases as you smoke and overlaps the pepper somewhere in the middle of the pipe. The tobacco is not sweet. It is extremely smooth, doesn't burn, doesn't bite. The strength is medium, it doesn't intensify. The nicotine hit is present, but weak. The tobacco burns enough hot, small pipes are not recommended for this tobacco. The ash is very fine, like dust, light gray. There is no moisture at all (and why should there be any if the tobacco was originally a bit too dry?)

The smoke smells like hay and is easily dispersed, not annoying those around you. It reminded me of the smoke from a good American cigarette.

Bottom line: I can't say that the blend is outstanding, on the contrary - it's quite simple, but extremely balanced and mellow. Unfortunately, given its dryness in the tin, I doubt it will get better over the years. But I'll keep the second tin and open it in three years.