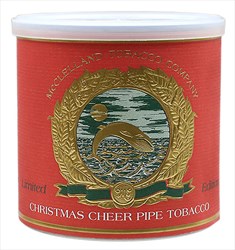 Notes: From tin insert: We are proud to offer our 2016 Christmas Cheer pipe tobacco, an exceptionally fine vintage tobacco, hand blended and aged in pressed cakes to develop natural mellowness. This 2016 blend is made with a special selection of ripe, red, flue-cured Virginia from a beautiful 2010 Middle-Belt crop. Superb leaf picked at peak ripeness, it is naturally sweet, rich in oils. It should age with distinction. Each buying season, we look for tobaccos of exceptional quality and distinctive character. In various combinations, their flavors, aromas, textures, contribute to the overall excellence of all our products.

The leaves of different crops and regions are combined to maintain consistency from year to year.

With Christmas Cheer pipe tobacco, we treat our discriminating customers to the singular pleasure of a tasting of the very finest in tobaccos of a particular vintage, not worrying about maintaining the flavor and appearance of this product into future years but actually striving instead to present the unique character of a single crop and area.

That's what Christmas Cheer pipe tobacco is all about. Happy Holidays!

Christmas Cheers 2016/2017 - I've decided to review these together as they were released at the same time. Which one is better? Well, I really have to split hairs, it's hard to tell them apart unless I smoke them back to back. The 2016 has slightly, and I mean slightly, more tang and high notes, while the 2017 is slightly more base. Both are very fine examples of McClelland Virginias. both are good on the relight, the flavor stays and doesn't get ashy. I find the 2016 has slightly more tanginess and stays most of the bowl. I find the 2017 closer to FVF, darker ,less spice. I'll try to buy more. Both are 4 star.

DAMN THE FDA for our loss of this yearly treat ,I thought we already had one Federal agency, the ATF, making tobacco rules. Next the EPA will be putting out rules requiring us to filter our exhaled smoke as we would be adding to pollution and Global warming. Will the government ever stop making useless new regulations ?

Similar Blends: similar to other Christmas Cheers, all great.

Looks like a typical CC in the tin... medium brown broken flake with the classic McClelland fermented sileage. I alternated bowls of this with the 2017 crop, mostly because that was the only way I could pinpoint the differences between the two. They were very close, and any diffs I detected could very well have been my imagination.

Once properly dried (and again, for those who don't like the signature McClellands smell, dry out the tobacco and it will go away. It'll also smoke a lot better!)... and they both took a pretty fair investment of time to do so... this tasted like it smelled - a fairly typical McClellands CC. That's not to say these vintages weren't very good. They were. They just didn't stand out from the rest of the pack like many of them do. This seemed more along the lines of the 40th Anniversary substitute rather than a full monty CC. The 2005, for example, is a classic Virginia that I'm happy to have found multiple tins of, at no small expense. The '16 and '17 would have been excellent if I had never sampled some of the other vintages. These seemed ordinary by comparison. That said, ordinary for McClellands is better than most blenders can ever aspire to when it comes to straight Virginia. The '16 seemed to have a bit more spice to it and more upper range while the '17 seemed to have a hair more depth. It was consternating to try and distinguish these. I tossed in a bowl of 3 other vintages just to make sure I wasn't going bonkers and those 3 were quite different, both from each other and from these two. I have no doubt these will age magnificently and I have an extra tin of both. But as of now, they aren't the classic, mortgage your house for a tin, perfect example of straight Virginia blends. If you're a red VA fan, you need to try these. I'm saving my other tins for at least 10 years, and we'll see what I have to say then.

This tobacco is an absolute joy. It has a heady nicotine hit, a deliciously grassy/fruity/earthy taste and burns supremely well. I've packed bowls of this many ways, but for me, rolling two whole flakes and stuffing them for a half bowl or four for a full bowl and crumbling one more on top with a slightly-stronger-than-average tamp is the best.

I really should have let this age longer, but with a full tin and several more on the way, I was dying to try this young. I'm really glad I did. It begs for slow sipping, something with which I struggle, but hasn't bit me in the least. It really works well with a breath smoking strategy if you've time to relax and sit down.

This is a simple smoke and a wonderful tobacco. It will reward you with grassy and fruity taste in inverse proportions to your smoking speed. Fight the urge to chase that wonderful flavor with more puffing, it comes best with slowness. It lights easily and requires few relights. It will age incredibly well, it is very sweet and for those worried about the famous McClelland 'ketchup', it dissipates with a little drying or once lit and influences the flavor not at all.

There will be an addendum once this has been sampled with some age.

I know I shouldn't have opened this yet, being what it is, but I couldn't help myself. I was late to the gold rush on this one and was only able to secure 2 tins. But I'll keep the other cellared to open years down the road. Smells like a delicious McClelland VA should in the tin, with a touch of fermentation. From first light I am amazed at the depth and complexity of flavor here. There's a lot more going on than what I've experienced with previous Christmas Cheer year models. It's rich, deep, and dark, and only just sweet enough to round the edges. Black cherry comes to mind. But what's got me so intrigued is the obvious spiciness, like the peppery sort of spice I get from Escudo. Obviously that comes from the perique, but where is it coming from in a blend of straight red Virginias? Interesting...very interesting. Right off the top I've got to give this one 4 stars. The leaf is top-notch quality, flavors are rich and abundant, and it burns evenly with no issues. It can bite if pushed but is sublime when sipped...par for the course. Highly recommended!

I was able to sample a few bowls of this fine tobacco from my local Wine and Cigar/Pipe shop.

From the tin it smells like a McClelland Va....tangy, earthy, woody, hayish goodness.

Loads and lights easy, whether you stuff the broken flakes directly in your bowl, or rub them out. Takes a few relights directly from the tin unless you are super attentive to it and puff at a regular cadence.

The smoke is wonderful with deep and complex notes. I was surprised at the creamy, bread-ish flavors. Another reviewer mentioned the tang, and I don't disagree, but it was a softer tang, without any kind of sharpness....hence why I mention the creaminess of it. Good red VA dark fruit, earth, with a bit of wood and spice here and there.

I was quite impressed with the blend and I need to get a few tins to cellar away before they are gone.

This is a beautiful medium brown flake that I was lucky enough to try at my weekly pipe club. The tin note has the typical McClelland vinegar smell but not very strong. This is one of the smoooothest blends I have smoked in some time. I have a small amount that was given to me which I will save for the weekend. At least I got to try this limited edition.

The red Virginias offer a burst of tangy ripe dark fruit, earth, wood, sugar, bread, some tart and and tangy citrus, mild floralness, light spice and vinegar. The strength is a slot past the center of mild to medium, while the taste level just reaches the medium mark. The nic-hit is in that center. No chance of bite or harshness, and barely has a rough note. Burns cool, clean, and slow with a very consistent flavor that extends to the lightly lingering, pleasant after taste, and room note. Requires some relights, and leaves little dampness in the bowl; less than many other years. An uncomplicated all day sweet smoke; one of the creamiest, sweetest entries in the series. Three and a half stars.