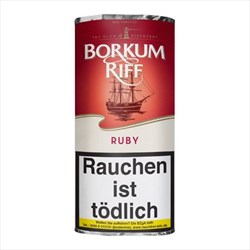 A highly aromatic blend. Kentucky, burley, and cavendish, sweetened with the luxurious flavour of cherries, and a touch of vanilla, producing a delicious smoke with a great aroma.

Notes: Known in the US as "Cherry Cavendish". The name was changed in Europe to "Ruby" due to EU regulations.

This blend was my last try from B Riff.as all other blends this was no good thing.the smell of tobacco was feeling chemical.so the taste while smoking.no tobacco taste for me with lots tongue biting and a very bad aftertaste.nocotime level was almost medium and room note very tense to others.this blend has no balance.burns very hot and it is a filter destroyer due to moisture and dumbness.not recommended for consuption

Age When Smoked: When opened

This is the last out of a selection of blends I bought whilst on holiday in Portugal.

The flavour's good, the cherries don't, as they often do, bully everything else out of the way. The vanilla gives the blend a good creaminess, and this is heightened by the Black Cavendish. Even though it says there's alcohol included, I detect none of it. The Burley and Kentucky have a notable flavour and give the smoke a fuller feel. It doesn't bite any, and the smoke's pleasingly cool; perfectly relaxing! It burns exceptionally well, leaving no dottle, and gives off a VERY thick and palpable smoke. The nicotine's mild, and the room-note's good; cherry vanilla!

I think many smokers would find this a bit of a bore; one of many cherry vanilla blends! I on the other hand enjoy it:

Has a pleasant cherry topping that does sublimate the tobaccos a bit. The Virginia is grassy with a touch of citrus as the base of the blend. The burley is lightly nutty earthy, and woody in a secondary role. The black cavendish is a little sugary, and is just above being a condiment. The Kentucky is a little earthy and woody as a condiment. The strength is just short of the center of mild to medium. The taste is a step past that center. Has a very mild nic-hit. Burns too warm and fast, but at least it doesn't have the chemical taste I noticed in BR's other cherry blend. I recommend this one over the other. Sip it, and you'll avoid tongue bite. Has a very consistent flavor from start to finish, along with a lightly lingering, pleasant after taste and room note. An all day smoke.

"The cherry is strong in this one."

Not being a huge fan of heavily topped aromatics, I got this pretty much by accident - needed some pipe tobacco as I was running out and could not easily replenish, the only place that had any and was still open was a gas station near Stockholm, and the only brand they had left was this. Only knowing the basic Borkum Riff line (the "bronze" as it's now called, and the "sungold" I'm not touching) I already guessed by the "Ruby" denominator that I was taking a bit of a risk and that I would probably be treated to some cherry flavour, and I wasn't wrong. The cherry is there and boy, is it there - already opening the pouch is like cutting into a big fresh steaming cherry pie made of dark, somewhat over-ripe cherries, and that promise is not failed by the taste! Even the room note probably smells a few hundred feet upwind of a large vat of cherry jam being boiled.

Unfortunately, like all heavily laced aromatics where an otherwise nondescript mix of cheap tobacco is made to smell and taste in a certain way by the liberal use of spices and chemicals rather than careful selection of quality tobaccoes complementing each other and then spiced just that little bit necessary, the taste never quite achieves complete wholesomeness, and always remains feeling just that little bit fake.

Not a regular smoke for me by any means but funnily enough, the overall experience is not that bad once you get used to it - if I ever feel the urge (and sooner or later, I probably will) to treat myself to some cherried pipe tobacco this is the brand I'll go for.

Tastewise: Creamy cherry deliciousnesss, with just a small splash of vanilla mixed in there for added benefit and uniqueness. No bite, No bitterness, No fuss. Lights well every time, always delivers that pleasurable no-frills smoke when you need to wind down and puff away. This is what I want in my pipe bowl during a lazy summers afternoon, THIS is the stuff i would stash away a metric ton of, inside an secure underground bunker when the world was coming to an end. After a while of testing different styles and blends early in my pipe hobby, this became the staple, go-to, golden standard on my shelf.

The other borkum riffs i don't care for at all, they are ranging from just ok to flat out hideous. This one howewer is a true gem worthy of the name ruby.

Also: Getting compliments from people on the lovely smell as you are smoking, is an added benefit.

Fun fact: Borkum Riff is named after a reef located in the north sea.

Age When Smoked: straight from pouch up to several months

Smells strongly of cherries from the pouch, so you know what to expect. Smokewise it's fine for being one of the most available brands here in sweden, more on that later. It tastes cherries, together with mild vanilla and it does have some body to it, so it's better than many aromatics out there simply due to that.

This also serves a special purpose for me, it's my panic button... once in a while i run out of tobacco or don't have it at hand.

Even in a rush it's fine and most importantly it gets the job done! Three stars for being a lifesaver!

I have chosen this as my first cherry aro and i have to say that I have mixed feelings.

Up on opening the pouch I was greeted with a warm, natural cherry scent, the tobacco in side is of a perfect moisture level to just pack and light. With my first proper draw I get a most agreeable sweet, strong cherry flavour that while enjoyable takes total control of the experience. Yes I also get a smattering of creamy vanilla and if I concentrate I can detect the underlying tobacco but both are thrust to one side by the overbearing cherry. It's a nice cherry don't get me wrong but it left me feeling as though the whole offering is slightly unbalanced. Maybe this is the way of the cherry aro, maybe I'm missing the point.

Past the half way point and the sweetness is joined by a slight sour edge that helps to avoid the whole experience becoming too sickly and stay this way to the bottom of the bowl.

Will I be finishing the pouch? Most definitely, though I will be sticking to a small bowl as I think for me a large bowl may become too sickly. On the upside a friend of mine has told me how agreeable the room note is.

The pouch note when you open this is a thing of beauty, rich tobacco, fresh cherries and a hint of vanilla, it made my mouth water! Given that, I just had to pack and light my pipe as I walked to work, the taste was that of cherries, vanilla and a deepness from the Kentucky and Cavendish! I was hooked! The flavour was consistent throughout the bowl, it leaves a little moisture in the bowl and only required a single relight. The added bonus was the truly lovely room note it gives off, to the point that a random passerby complimented it. Given I'm only three bowls into this having never tried it before my opinion may change and if so, I'll update this accordingly, but at the time of writing this has become one of my favourites and I'd reccomend it to anyone who appreciates a good aromatic.

Pipe Used: Falcon AN7 with a Meerschaum bowl

I was quite surprised by this one. Very nice tin and room note as expected. Primarely cherry but with a hint of vanilla too. And although the flavoring is rather strong, the overall taste is pretty clean snd consistent. Very good when you want something mild in the nic department and satisfies the sweet cravings too.Give it a try aromatic lovers, this is a good one.

I ordered this tobacco by mistake - I meant to order Borkum Riff's Highland Malt - but I figured I may as well smoke it. Firstly the room note is very very good and the taste is not too overpowering. I would say it is every bit the equal of Cletic Talisman which is the only cherry tobacco I can tolerate. It burns well and provides a consistent flavour right down to the bottom of the bowl. The chief taste is cherry but the sweet vanilla does linger in the mouth after a few puffs. I'm not really an aromatic smoker but this makes a nice change of pace and if it's an aromatic you are after then I can recommend this one highly.

It certainly tastes like cherry and is very sweet. At first, this might actually be enticing, but after smoking it several times I got tired of it pretty quickly. When you open the pouch it smells a little like a candy store. What I don't like about it is that the flavoring tastes a bit artificial. I still think it might be a good aromatic for beginners as they may find the sweet candy-like note appealing. Room note is definitely very nice though, your better half will love it

This is my first try from the Borkum Riff's tobaccos. Didn't try others although I want to. It leaves a very pleasant smell in a room. Everybody liked it (I mean the smell). The nice thing is that is not that strong and as a result your mouth doesn't smell after. Very light and not everything is perfect rather than the smell. One time thing.

Purchased From: Tobacco Shop in Cyprus

It's smell like a cherry marzipan/almond and has a kind of chemical aroma, the flavoring for me and a people around me a little bit strong. In the taste that kind of strong smell doesen't feel. This tobacco likes bite my tongue so i recommend to realy slow smoke.