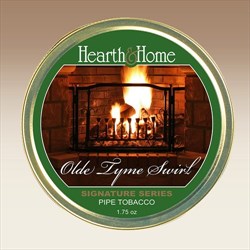 Hearth & Home Signature Olde Tyme Swirl is a blend of burley, Virginia and black cavendish that's been finished with soft notes of vanilla and chocolate that still allow the taste of the premium leaf to shine through. If you're looking for an aromatic that has a nice room note while still tasting like real pipe tobacco, give Olde Tyme Swirl a try.

Received this in the mail yesterday, along with some Lord of the Manor, Venguer Platinum, Match Hickory and Decatur Soft and Mellow. Have to say I'm somewhat dissapointed. Don't get me wrong, it's a nice attempt at replicating that classic Vanilla-Cocoa pipe full, but it misses the mark. I barely taste the Virginias. And whatever is there, lacks sweetness and depth. The Burley really stands out, very spicy. Personally a White Burley, like that found in Carter Hall, would have worked more in concert with the other elements in this mixture. There is a hint of chocolate when you light up, but midway down the bowl it goes flat and you guessed it, the Burley spice drowns everything else out. Leaving you with the worst bite. I can't even taste the Vanilla. In short, less pepper and a little more salt so to speak. H&H has some nice blends in this series, but if you can find a can of their Sycaway, it's by far a better choice. In fact upon light up of OTS, I thought they had put Sycaway in this tin by mistake. The bowl also gets hot, even when sipping. I even gave the cob a thorough cleaning and packing before trying this blend. Nothing helped. At least Sycaway is smoother and doesn't overwhelm or sizzle the tongue. If you like overbearing spiciness and flat tasting tobacco this might be your bowl's delight. Not for me. I reluctantly give Old Tyme Swirl two stars. I've jarred some up and praying for the best. Don't know if that prayer will be answered though.

Being as it's new years day I fancied an aromatic.

The Burleys and Virginias make up more of the blend than black Cavendish. The Cavendish takes responsibility for about 25%. The blend's concealed underneath a clear plastic topper, and is slightly coarse with good hydration. The aroma's mild vanilla/chocolate, but nothing strong.

Where the tobaccos are concerned I find lots more Burley than the other two. The Burley gives quite a hoarse flavour, whereas the other two offer only a delicate nuance. The toppings go a treat with the rough Burley as they assuage and placate the ruggedness; creamy chocolate and smooth vanilla. I notice more chocolate than vanilla. The toppings have been included in an amount that give a clear, aromatic, flavour, but don't 'take over'. It burns steady, producing a bite free smoke.

Olde Tyme Swirl? A bit of a contradistinction: on one side we have the stertorous Burley but then we have the calming note from the toppings! Either way, I like it! Recommended:

Age When Smoked: One year