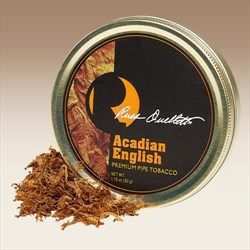 In October of 2015, while spending a day with Mark Ryan at the L.A. Poche Perique Company in St. James Parish, Louisiana. our own Russ Ouellette asked Mark is he had ever thought of trying to process Virginia in the same method as perique. Mark said that he had thought of it, but was told it wouldn't work. After a bit of conversation, Mark decided to bring down some bright, sweet, yellow, Canadian-grown Virginia to give it a try. The processing time had to be much shorter due to the aggressive fermentation due to the high sugar content, but the result, called Acadian Gold, has more depth than normal Virginia with a malty note unlike anything else.

Russ was so fascinated by the uniqueness of this new tobacco that he wanted to try it blended with a modest amount of latakia and a touch of unflavored black cavendish. The result is a singular, subtle latakia blend with more richness than you'd expect. If you're an English blend fan, get yours while you can because quantities will be severely limited.

The various Virginias offer a big burst of tangy, fermented citrus with a mild malty tartness, a fair amount of grass and hay, some sugar, a very light dark fruitiness, wood and earth, a slight floral and bare spice note, and a few drops of honey and bread. The smoky, musty, woody sweet Cyprian latakia is a supporting player, and mitigates the sweetness of the Virginias just a mite. The unflavored black cavendish adds a touch of smooth sugar way in the background. The strength and taste levels just make the medium mark. The nic-hit is in the center of mild to medium. Won’t bite or get harsh, and has no dull or rough moments. Burns cool, clean, at slightly less than a moderate pace with a very consistent, rich flavor all the way to the end. Leaves little moisture in the bowl, and requires an average number of relights. Has a pleasant lightly lingering sweet, mild campfire after taste. Can be an all day smoke. Three and a half stars.

I purchased two tins of Russ Ouellette’s Series Acadian English in August and opened the first tin on Sept. 22. Since then I have smoked it at least once every day so I’ve probably had about 15 or 16 bowls.

The tin note is enticing. I get the sweet, smokiness I associated with Latakia mixed with the a unique sweet maltiness from the Yellow Virginia which were processed in the perique manner. In fact, this blend is comprised of the Acadian Gold blend and Latakia. There is no casing that I know of but I did get just a hint of cocoa from the newly opened tin. Now, with it having been opened daily for about 2 weeks, the cocoa isn’t there for me, but the sweet smokiness is.

It was a little wet at first, but I’ve let it dry out and now I can load it into a pipe and pretty much smoke it to the bottom of the bowl without re-lighting. I like it better for sipping in a cob, but I have also smoked it clinched in a briar and just slowly puffed. No bite to speak of except one time when I smoked it too fast.

In my opinion this starts out as a medium strength blend and slowly builds up in strength as I get to the bottom of the bowl.

The aroma and taste most noticeable to me is the sweet smokiness with dry hay. Overall I think it is a nice, clean smoke which reminds me of smoking a good mild to medium cigar. In fact, a couple of times it has left me with the same mouth feel and aftertaste of a cigar. This is not necessarily a bad thing.

While this is not my favorite of Ouelette’s Acadian Series – I prefer the Acadian VaPer – I am glad I bought two tins of this and will be ordering some more of it for my cellar.

I was happy to be the recipient of a sample of this, since I passed on purchasing a tin of this when I bought tins of all the rest of the other Acadian and perique offerings that came out by Russ at around the same time.

The reason I passed in particular because it just did not sound like something I would like as I don't typically care for blends with both Perique and Latakia, so the idea of a Virginia being processed like perique and used with latakia and oriental just did not appeal to me even though it did intrigue me.

As it turned out, I really enjoyed it, yet did find it to be a little too tangy and zesty to launch to the top of my latakia blends, but I would be pretty happy letting it sit in my rotation in that spot, particularly as a change up to the standard V-L-O mixture.

The sidestream on this blend is pretty nice and the oriental has a nice earthiness to it, but also may contribute a little to that tanginess, but my gut feeling is the tanginess is from the treated Virginias. Since this is the star of the blend, I doubt very much that Russ would try to hide it. I will be able to discern this better once I have had a chance to pop the tins of Acadian Gold or Vaper. The lat is nicely used as a condiment and will not overpower at all.

My benefactor mistakenly gave me two samples of this. I have finished the first and will cellar the second to try later after I have had a chance to try the other Acadian blends. Three stars for now and four if you are looking to shake up your standard VLO rotation.

Part of the three-tobacco Acadian series with some similar notes to the other two. Particularly, this is sweet and malty. The virginia and latakia are playing very well with each other in a very balanced blend. It's not aimed at any virginia or latakia lovers specifically, but for those who dare to try new things and simply appreciate and enjoy this special process and outcome. No flavor is overpowering. This can be an all day smoke if the producer wasn't slowly running out of stock.

Comes well dried, with a nice ribbon cut, although you can find some small parts of leafs in there. Packs well, lights well, smokes smoothly. Taste the way it sounds - aged tangy and malty tobacco with just the right amount of latakia.

I feel sad that this tobacco will run out at some point because I'd gladly have some of this and the other two set aside for years to come. Giving it three stars because four stars has to be reserved for the Virginia-Perique version.

Because of the special treatment, I can't think of other similar blends. Go get some before it's gone.