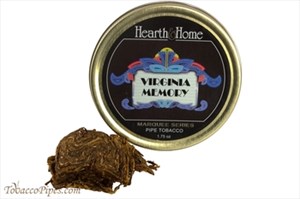 From P&C's website: Hearth & Home Virginia Memory is the first true flake in the Marquee Series. Flue-cured tobaccos from two continents are rolled, then pressed and sliced. There's a remarkable natural sweetness, and the flavor profile is the traditional hay and grass notes that one would expect from premium flue-cured tobaccos.

The flue cured Virginias offer some tart and tangy, slightly acidic citrus, plenty of floral grass and hay, light ripe tangy dark fruit, earth, bread, wood and a pinch of spice. The creamy caramel and light vanilla toppings have a little richness to them. I sense a bare hint of coconut and something perfumy. The toppings moderately sublimate the tobaccos. The strength is in the center of mild to medium, while the taste is a couple of steps past that mark. The nic-hit is a couple of slots past the mild mark. It won't bite or get harsh, and barely has any rough edges. An easily broken apart flake that burns clean and fairly cool at a reasonable pace with a very consistent sweet and floral, barely perfume flavor that translates to the lingering after taste and room note. leaves very little dampness in the bowl, and requires a tad more than an average number of relights. This has a much less perfume and acidity than Luxury Twist flake does in bulk, and tastes like it has a light amount of age.

To my palate, this Virginia has an extremely strong vanilla/caramel/peach topping that borders on being sickly. As someone who simply doesn't like aromatic tobaccos, I was rather disappointed that none of the descriptions mentioned anything about the obvious syrupy aroma that completely overwhelms any tobacco flavors that might be hidden somewhere in the smoke.

I absolutely love the rest of the Hearth & Home line, but this was a huge miss. As always, YMMV.

I mistakenly thought this was H&H Virginia Memory #10, a bone-dry Virginia with maduro leaf. Was quite surprised to open a Lakeland-like VA flake. Nice presentation, tightly rolled, thinly cut, fragrant. Fairly moist, used the old 10-20 sec microwave trick. Lit and smoked well with no relights needed. No dottle, no very little moisture. The flavor was nothing to write home about. Smoke stung the eyes a bit, which makes me wonder if there's not a pinch of perique? Almost zero nicotine hit.

I'd planned on cellaring this one for awhile, but I was in the mood for a straight Virginia this morning and I opened a tin of Golden Glow to find it wasn't hitting the spot. Ergo, I opened this and it's only been in my stash for about three weeks. However, I think it would be a superb smoke in the summer so I might order a few more tins to add to my cellar!

Because Smokingpipes.com and this site have the cut listed as just flake I was surprised when I removed the lid. It looks identical to Peter Stokkebye's Luxury Twist Flake. A nice surprise! Because the flakes are thin and of a perfect hydration it makes rubbing/filling easy as can be. But, the ease carries a paradox: use a gentle hand or the flakes can become very fine making the burn too quick. Try to keep them as chunky as possible.

As you'd expect it lights up without an issue and gives a very even, medium temperature, burn. Again, that's where the preparation's paramount: keep things chunky to prevent medium becoming warm. It's a 'fresh' tasting Virginia, there's no ripe, deep, nuances, it's all sharp citrus, sweet and grassy. That's why I fancy some for the summer: it'd be great in the sunshine paired with a fruity drink! The only negative is bite, but, I've had much worse.

I respectfully disagree with some of my esteemed colleagues. Indeed on opening the tin one gets a rather strong whiff of something that may easily be mistaken for an aromatic (same thing happens with Exhausted Rooster and, especially, with Dunhill's Three Year Mature). But the aroma belies a very nice pure Virginia flake, that smokes wonderfully.

True: this is nothing to write home about, but it's very good, along the lines of Virginia Slices and Orlick's Golden Sliced. It's more citrusy than the former and more fruity than the latter, but it still is a very nice Virginia.

While not the best of the show, it is a very nice alternative. I wouldn't mind smoking more of this.

Beautiful square twist flake, thinly cut to just about a shag thickness. A mixture of lighter and darker grades of virginia make up the flake with some thicker stems/veins here and there. The moisture of the tobacco was just right out of the tin after about a year of aging.

Tin note is aromatic with a vanilla top note and not much typical virginia odours that one would expect from an unflavoured virginia tobacco.

The tobacco lights easily and stays lit with few relights. Burns to a light grey ash with very little moisture and dottle (using a 9mm filter). The vanilla top note is not as strong as in a traditional aromatic, but is there throughout the first half of the bowl, dissipating towards the end. There are just so many better pure, unflavoured Virginia tobaccos out there if that is what you are seeking. Virginia memory is fine for those seeking a slightly aromatic tobacco but not on my repurchase list.

I happen to like Peter Stockebye's Twist tobacco . A decent smoke with a little too much topping but a passable virginia flake . After opening a can of Virginia Memory I am not sure that this is not Twist. What I found in the can looked exactly like Twist except the VM seems a little lighter in color than the Twist .That might be the that the Twist I have in stock has been aged in a glass jar for a few years . The taste is close enough but I cannot get an exact read using aged Twist . If it is twist we must realize that a pound of Twist goes for $43 , a pound of Virginia Memory would go for around $92 , as you would need 9 of the the 50 gr cans be close to a pound of tobacco That is near a 60% mark up over retail. I have found quite a few other tobaccos from other companies using either Twist , Luxury Navy or Bulls Eye . There have been too many instances of inexpensive bulk tobaccos sold in 50 gr cans , at a much higher price , pretending to be new on the market blends . This looks like it might be an example of the above . 3/6/19 In light of William Serad's article in the last , and I mean the last , issue of P & T magazine I should revise my comments . He believes that , although they strongly resemble one another , they are slightly different . He might be right on that but it becomes academic . There is little visual difference between them though the twist be a tad lighter. The Va. Memory seems a big harsher to me , I could not get the same Va . experience out of it . In the end , you might as well but the twist at a much lower price for , pretty much the same experience .

4/10/19 I am starting to rethink my first review which I will leave posted to show my evolution . Although it's a dead ringer for twist , it might not be the clone that I suspected . Real close , but maybe no cigar . This one is a little sweeter with more high note virginia taste . Maybe it's because my twist supply is well aged it has a deeper taste . I am willing to give it the benefit of the doubt and raise it to 3 stars.

I'm fairly new to pipe smoking. And, although I'm developing my pallet to detecting the different tobacco leaves; I have to say, that this was a nice smoke. I may be wrong but I think there may be a bit of perique, and a light note of something pleasantly sweet.

Also, while savoring the smoke, aside from the note of perique and something lightly sweet, I was reminded of freshly baked French bread. Warm, tasty and well balanced.

Thanks, Hearth & Home. I will definitely stock up on this blend and try the rest of your blends.