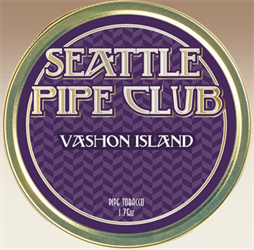 From P&C's website: Seattle Pipe Club Vashon Falls is a true American-style aromatic. Made with a rich mahogany burley, yellow Virginia and silky black cavendish, it has notes of caramel and vanilla that makes Vashon Falls a great choice at any time of day. This is a blend that will remind you of the good old days.

I took a chance and ordered Vashon falls, and boy I was not disappointed at all. I smoke some of my other brands, but I keep going back to seattle pipe club Vashon falls. thanks for coming out with this great new blend. FRANK

Age When Smoked: new opened can

The mildly nutty, earthy, woody mahogany burley takes the lead over the citrusy, grassy/hay-like yellow Virginia. The sugary black cavendish provides a smoothing sweetness as a supporting player. The vanilla is mild and has little depth. The caramel isn’t strong either; less obvious than the vanilla, but ever present. The toppings tone down the tobaccos to a moderate extent. The strength is very mild, while the taste is mild. Has little nicotine. Won’t bite or get harsh. Burns cool and clean at a reasonable pace with a very consistent flavor to the finish. Leaves little moisture in the bowl, and requires an average number of relights. Has a pleasant, short lived after taste and room note. An easy going all day smoke. Two and a half stars.

received a sample of this from the Tinsociety.com box.

I didn't realize that SPC had done an aromatic.

Moisture level was good from the bag, easy to pack and light with the ribbon cut. Only a single light needed. Sipping keep it for tongue biting but burned hot in the pipe.

Taste was a mild vanilla which lasted through the bowl. Slight caramel at times, but not very strong. Didn't pick up much tobacco taste past the flavoring.

Not a "knock your socks off aro" but would pair good with a cup of coffee or maybe a stout.

Because I've been busy with Christmas over the past week although I've smoked different blends I haven't had time to post a review. I like to sit and take my time to think about the dialect!

Even though the coarse mixture includes black Cavendish it looks like it's a fair split; about 50/50 black to brown. I see some 'leafy' pieces but nothing too coarse. It smells sweet with a delicate touch of custard. The moisture was good to go straight away.

The smoke has a definite aromatic trait, but isn't too heavy. The caramel comes over more to begin with. For the first quarter the smoke's sweeter. But after this the vanilla joins in, without being too sticky or cloying. The tobaccos are both sweet yet rugged. The black Cavendish brings the saccharinity, yet the Burley causes a roughhewn, coarser, flavour. The Virginia is easily outweighed by these two. It burns steady but can become too warm when I force it.

Vashon Island? A good smoke, but the temperature removes a point. Three stars: