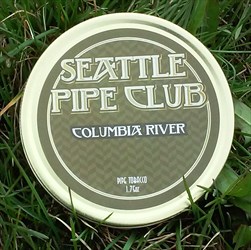 From P&C's website: Seattle Pipe Club Columbia River brings a pleasant, smooth aromatic to the SPC lineup. This mixture of bright Virginia and black cavendish has a lightly sweet note with a warm flavor and enjoyable aroma - perfect for a cool, rainy day.

The mildly brown sugary black cavendish is the lead component. The grassy, tart and tangy citrusy bright Virginia also sports a hint of honey as supporting player. The vanilla topping has a little richness, and while it does sublimate the tobaccos to fair extent, it doesn’t quite bury them. The strength is a step or so past the mild mark, while the taste is a hair past that. The nic-hit is extremely mild. Won’t bite or get harsh. Burns cool and clean at a moderate pace with a very consistent, mellow flavor from start to finish. Leaves little moisture in the bowl, and requires an average number of relights. Has a very pleasant, slightly lingering after taste and room note. An easy going all day smoke.

I have had a few non-aromatic Seattle Pipe Club blends before with above average results, this aromatic river was a bit more turbulent for my tastes. Sure it smelled somewhat sweet, but the prevailing wiff I kept getting was musty and sour (almost cherry).

The cut was nice and bouncy and the stuff burned well. The initial first light sugar taste lasted about two puffs, then quickly became unremarkable, boring, and slightly bitter. I don't consider it to be bad. I did make it through the tin without the 1 star impulse to give it away, but I was anxious to be done with it.

I am curious who makes Seattle Pipe Club? The back of the tin mentions STG and Lane (if they are the same entity, then my eyes have awoken to a tobacco conglomerate).

Best thing about Lockdown? Plenty of smoking time! So, have been dipping into a few different blends from my stash.

I opened this 'blind', not knowing if it's English, VaPer, Va, Aromatic, etc., but the imminent aroma attested this as an aromatic; sweet. The mixture includes coarser black pieces than brown, and there's much more brown than black. The moisture suits me, for anybody who reads my opinions, as it's a little damp.

The smoke has a more buoyant, lighter flavour for the first quarter. As the bowl progresses the vanilla develops a more caramel-sweet character; becoming somewhat 'sticky'. I don't find the tobaccos to be cartelized by the black Cavendish, this gives a little flavour but is overshadowed by the added vanilla. To my palate the bright Virginia's verdant quality steals first place. I get a mid-temperature smoke but it can bite, a little!

Columbia River? Even though it can deal a little peck to the tongue it still deserves three stars: