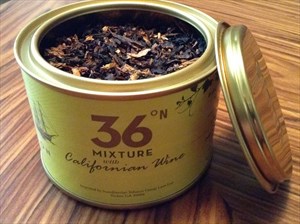 Consists of 65% double fermented black cavendish from East Africa, Italy, India, and Brazil. 25% of the mixture is golden Virginia and the last 10% is nutty burley. Real dry California chardonnay have been added together with flavors caramel, vanilla, citrus, and curacao.

With an order, I got this free. What does PipesAndCigars have against me?

The smoke is thin, the flavor is thin. After only 3 bowls it was tossed in the bin.

The Black Cav has no depth and the Burley is weak. The Virginias refuse to come out for a peek.

Are there aro flavors? Please, do tell. It's a sweet mish-mash straight out of hell.

The flavor profile is lacking in "bass". It's mostly high notes thrown in your face.

If you pass this tin to one of your friends, that will be the day that your friendship ends.

Mild in everything. Be prepared to re-light. Be gone, foul blend. Be gone from my sight.

[DISCLAIMER: Just having fun here. I may have exaggerated the hideousness of this blend, but only slightly.]

Purchased From: freebie from pipesandcigars

Let’s cut to the chase, this is Borkum Riff we are talking about. Okay? Not McClelland, Dunhill or some other boutique pipe tobacco. With that out of the way, I was gifted two tins yesterday at our weekly pipe club from one of our members who said he would never smoke it or tried it and didn’t like it, I can’t recall which. It seems these tins were a give away from Pipes and Cigars according to previous reviews. I saw a few one stars and thought what have I gotten myself into? I like the tin art and the fact this has a metal lid rather than plastic. Probably not a good sign to lead in with the tin art. Ha. What about the tobacco? Upon opening the tin, I smelled a tremendously strong wine/berry aroma. To me this smokes like it smells. I spent the whole day puffing on this mixture and chose a small bowl LHS briar poker and a corn cob. I sipped on this one as it seemed like at times it could bite. For what some would consider an OTC I really liked it. Now, would I recommend someone go out and buy this? Not necessarily, but I would recommend this to myself. This blend is also flavored with Curacao. According to Wikipedia, Curaçao (/ˈkjʊərəsaʊ/) is a liqueur flavored with the dried peel of the Laraha citrus fruit, grown on the island of Curaçao

Not long ago I received multiple tins of the Borkum Riff limited edition blends to review and sell on my private website from a friend up in Arkansas. It took awhile to get to them because, frankly, most Borkum Riff blends and my palate get sideways with each other. These limited production blends, however, were a cut above their standard fare.

Borkum Riff went to the well with California Wine and pulled up quite a compilation of flavoring to go along with the Virginia and Burley. So many different aromatic flavors hit me at once that I wasn't sure what was what. I did find it overwhelming. This blend also burns a little hot but not wet. It was the least impressive of the three of these limited edition blends that I tried.

As with several reviewers, I received this as a freeby with an order from pipes and cigars. I'm going to be a bit more generous than the other folks and say that this isn't an awful tobacco. One can definitely tell there's wine added, and as the tin gets a bit of age on it that wine adds a sourness that is not altogether unpleasant. Yes, that may seem a bit odd but it's a sourness that adds to, perhaps even dominates, the flavor profile and I kind of like it. There's a bit of a lemon tang and a hint of grassiness here. Not an every day smoke but I find myself coming back to it a bowl or two a week. Now, this is a Borkum Riff tobacco so, yes, it will burn hot and, yes, we're not talking about the highest quality of leaf. Smoke slowly in a small bowl.

Age When Smoked: new from tin

Well....where can i start. It smells different, not like most aromatics, but i like it?? Kinda sweet with a tangy background.

Trying to keep this lit is almost impossible. I honestly gave up after awhile and just stopped smoking. Flavor wise. NOTHING!!! Nothing but scorching, hot, tasteless air.

I have 2 tins and i cant justify throwing away, so ill just keep them till i die or something!

There is probably a reason pipesandcigars.com added this to my order as a thank you gift (two 3.5oz tins in fact), because nobody in their right mind would smoke this nonsense. So, I logged into tobaccooreviews.com and made a new entry just to share my displeasure (though someone else beat me to a review).

Right off the bat when you open the tin you think, "yup, this stuff smells cheap." Think cardboard that has gotten damp and full of mildew from some spilled cheap wine. There are also some notes of cherry and armpit singing in this one.

I grabbed a corncob and felt bad for the pipe which would soon suffer from the damp wad of putrid shreds I stuffed into it. It was fairly mild and tasted like a cheap gas station cigar; a wine flavored Black & Mild without the fun of gnawing on the rubber nib. To make matters worse, this garbage would not stay lit.

One tin I pawned off on a "friend" and the other was banished to the garage with all the other emergency tins, never to see the light of day.

I'm no expert by any means, but even I know this stuff is bad!

I have been smoking Borkum Riff bourbon flavor, since 1965...I could never switch to another...not even the other flavored Borkum Riffs...HOWEVER..I rec. a can of the 36 N mixture with an order, and I LOVE IT...!!! I still like my Bourbon flavor, but will ALWAYS have a can of the 36 in my fridge for a " different " but very tasty smoke. Thank you for the sample can...!!! I give it a FIVE star rating, 5 being the best...

Similar Blends: Bourbon flavored, but a tad sweeter on the tongue.....