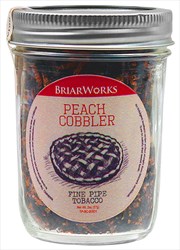 After recently trying several other blends that failed to deliver on the promise of their name, I was not expecting much from BriarWorks Peach Cobbler. I thought that maybe there would be some tin aroma related to the smell of a baking peach cobbler.

I have been pleasantly surprised. When I open the jar I bought from smokingpipes.com last month, I smelled peaches, a little vanilla and some light whiskey/rum but nothing that really reminded me of a peach cobbler. Now, after smoking half the jar, I open it and still smell the peaches, vanilla and some light whiskey/rum but can say that it reminds me more of a peach cobbler scented candle my wife showed me at a craft store. Don’t get me wrong! It doesn’t smell bad it just doesn’t smell like something fresh baked.

On to more important things. I’ve never had to let BriarWorks Peach Cobbler sit out and dry before lighting. Even with the first bowl it took just a charing light followed by a tamp and second light to get it burning evenly. The sweet fruity flavor of the peaches with a touch of vanilla has been apparent to me immediately every time I’ve smoked it. The peach and vanilla does become less pronounced to me after a half bowl but it retains the sweet creaminess of the smoke throughout the bowl

As would be expected from a good aromatic, the room note is very pleasant. I’ve had one of my grandsons ask “Who’s eating a peach? I want one.” To me that is high praise for this blend. Strength wise, I found it to be a mild to medium with the nicotine slowly building up to a noticeable level near the end of the bowl. So far it has been smooth and it has not produced any tongue bite or burned hot other than one time when I was smoking it outdoors and the wind picked up. Smoked slowly it will not bite.

Bottom line for me: I have already purchased two more of the 2 oz. jars and placed them in my cellar.

Age When Smoked: new to one month

Although this is an Aromatic, the tin (jar) note is not overpowering. It has a scent of baked peaches with an undertone of buttery goodness.

It comes out of the jar "Goldilocks", packs well, lights easily and stays lit. The aroma is very pleasant and the smoke has a nice taste of peaches to it. It's a mild blend and easily an all day smoke. I watched a whole movie on one bowl with only 1 relight.

A nice change from the English Blends I usually smoke.

This blend has an almost overwhelming peach smell. If you like that you'll find the smell tantalizing.

I don't taste much of the nuances of the tobaccos; the flavor is really what drives this blend. While very present, the flavoring is not too much. The tobacco burns surprisingly well for how strong the aroma is, does not burn too hot, and requires a normal amount of relights for an aromatic or less. I was pleasantly surprised that it actually tastes peachy, and the room note is wildly appreciated. There is also a bit of a custardy taste, though not as strong as the peach. It could be flavoring flavoring, but it has a feel as if it's the natural flavor of the cavendish under the casing.

I have tried several peach-flavored tobaccos in search of something I like. I wanted something with a fruit essence outside of cherry, which always tastes like cough syrup to me. Perhaps it's a ghost of childhood. This was one of the blends I tried.

Upon opening, I detected some peach and vanilla ... and maybe some sort of liquor-ish hint. It smelled good to me. I found it at the perfect humidity right out of the jar. No need to dry. I loaded my pipe, and it was good. I like this. It smokes easy. The black cav-VA blend is smooth, and I get a hint of peach - maybe not very peachy - but there's a hint there. I get maybe more vanilla than peach, but it's there. And unlike a lot of aromatics, I get a tobacco flavor as well and a decent dose of Vitamin N. I like this blend. It's not an everyday blend for me, but I did have a couple of bowls after dinner with an adult beverage and was quite pleased.

I can smell peach and sweetness in the room after leaving and returning. That's the best I can go on. My spouse isn't much of a fan of any tobacco.

I agree with others and give it 3 stars. It's going into the rotation. I've read that the Briarworks tobaccos are blended by C&D. If you're looking for something with a peach essence but you don't want a goopy, hot-smoking blend, give this a try.

Similar Blends: I can't say it was that similar to other peach blends. I like this one..

There are few things on this earth that I love more than the taste of a sweet, ripe peach. Peach pipe tobacco, sadly, pretty much never seems to deliever that flavor.

The tin note smells very much of a sweet peach. The room note gets an approval from the women in the house; the 40 year and 17 year old both liked the smell. If only Frog Morton On The Bayou could smell so good to them!

The tobacco is only slightly wet, which is expected from an aromatic with a flavor casing, but not overly so. I gave it no drying time and it lit straight away, and the bowl went from True Light to total ash without any re-lights. It left absolutely no goop in the Cob. Pretty impressive for an aromatic!

But the peach is, for me, far too understated. If I’m in the mood for an aromatic, and I want a peach tobacco at that, then I want a peach tobacco that tastes like a peach! As it is, this is a three-star blend to me. Make that peach flavor pop and I’ll happily give it that extra star. For now, I may try mixing it with that Brigadier Black Gettysburg blend from P&C, which very much tastes like peach but is so wet that it needs about ten months of drying time!

Opening the jar gave me a nice fruity smack on the nose! A lovely aroma of peach, or maybe apricot. The taste is a nice balanced cavendish and virginia blend with a nice peach flavor. I can also taste some vanilla.

It's a very nice fruit aromatic, and I like to enjoy it like a little sweet treat for myself.

Age When Smoked: Just from shop

Update: 6-14-19: With summer coming, I dug out my jar from last summer to smoke again. reminded me why I enjoyed it so much last year. One of the few Aros that I really look forward to. The time in the jar mellowed it slightly but it still has a strong peach room note which will get comments.

Out of the Briarwork's series this has been my favorite Aromatic by far. The peach cobbler gets high praise for its room notes, its a bakery type smell according to my wife with a peachy type of smell.

The taste has the same peach, but subdued. The tobaccos are tasty, but not overpowering in anyway.

For me, I'll keep a jar for smoking at the house, wife approved room note but it will never be an everyday smoke for me.

Age When Smoked: fresh from tin to 1 year