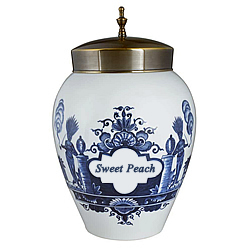 A blend of red burleys with cavendished Virginia. The casing process, where the blend is dipped or sprayed, imparts the lasting background flavour while the individual aroma comes from top dressing.

The burley is nutty sweet with some earth and wood as the lead component. The Virginia is a little grassy with a touch of tart and tangy citrus in a back up role, and often not very noticeable. The peach topping is sweet, but not overpowering, though it does sublimate the tobaccos quite a bit. It has a clean taste; no artificiality, and doesn’t flash off too much at the finish. The strength is a step past the center of mild to medium. The taste is medium. The nic-hit is a little past mild. Burns cool and clean at a reasonable rate with a mostly consistent sweet flavor. It needs to smoked at a moderate pace or you risk a little tongue bite. Will leave a little moisture in the bowl. Requires an average number of relights. The after taste and room notes are pleasant, but short lived.

Aroma On opening my new 12gms pouch of American Blend Peach tobacco I'm hit by a pleasant mix of expensive chocolates and peach liqueur not dissimilar to that of entering a Lush Cosmetics store (albeit less intense). Very slightly artificial but I think it compliments the tobacco well.

Texture Dark in appearance and coarsely cut, it packed well into my greedy briar. It burned well and stayed lit without relights however when reaching the bottom of the bowl gurgled slightly and left a small puddle. Of course this may have been down to over enthusiasm on my part, if smoked at a slower pace this could have been avoided.

Taste The peach was apparent even though my pipe was slightly ghosted by a previous bowl of Clan Aromatic. Enthusiastic puffing did result in a bit of tongue bite, but this was at the very end of the bowl. The taste developed over the course of the bowl with the peach becoming less intense toward the end.

I have some pictures of this tobacco at: http://rlstevenson.co.uk/american-blend-peach-tobacco/

Tin Aroma: A wonderful natural peach aroma which is sweet but not sickly, mixed with the unmistakable nutty/mustiness of burley.

Room Note: A warm peach aroma which is not overpowering but very pleasant indeed.

Packing: Because the tobacco is very uniform with short strands and slightly on the dry side, packing is exremely easy. Also, being springy it makes using the three tier method a breeze.

Lighting: Again, very easy. A charring light, firmish tamper and second light are all that's required for a long and even burn.

Appearance: This particular blend is a uniform tan to mid brown in colour and a shortish, evenly cut ribbon.

Smoking: As soon as the flame walks over the tobacco the flavour of an unmistakable American blend comes through. Although the peach is sweet (but not artificial or clawing), the first flavour to hit you is the classic slightly bitter, nutty and smokey taste of burley. Next the topping comes in to very pleasantly balance the flavours, a bit like sweet and sour or dark chocolate confectionary with a sweet filling. The nicotine hits you pretty fast as well, revealing that this is quite a punchy weed. As with most quality burleys, this smokes very cool with a full bodied smoke. It never overpowers though, and remains perfectly balanced to the bottom of the bowl with no ashy aftertaste. I could not detect the virginia component, but being cavendished it only really serves as an agent for the fruit topping. Burns slowly and evenly to a fine grey ash and smokes equally well in a briar, meerschaum or even a clay cutty! Produces copious amounts of wonderful aromatic smoke but smoulders splendidly between puffs. Simply a beautiful tobacco, and I'm surprised to be the first to review it!

Cons: None at all. They don't come much better than this (IMHO, ofcourse!).

A decent smoke, a very light touch of peach smell and taste. Ready to pack from the pouch. Burns moderately, not too fast or slow. Worth a try.

Based on a gifted sample: 'mild at all flavor levels' would be my short review -- the burley is just detectable, the 'Cavendished' VA seems to be hiding, and the peach (and N) is just a whisper. This smokes as fast as the short thin ribbon cut would suggest, and a bit on the hot and bitey side. Great room note, though!

A sweet, toasty note from the Cav. Nuts and earth from the Burley. A light peach flavor that has some creaminess to it. Taste a little bit thin to me and it will bite at times.

Mild to medium in body and taste. Flavoring is mild. Burns very well.

In a major departure of the norm I picked up some Gwaith Hogarth American Peach on a whim. It's actually quite good, good tobacco flavor with a nice subtle peach flavor which complements the Va's well and a killer room note. This is really a nice smoke

Similar Blends: Nothing I can think of.

I only tried this one because I remember, many many years ago a friend at university used to love this stuff. Having had a wee puff and good waft of room note, I was quite impressed.

So it was with fond memories that I opened up the packet and took a good draft of the smell of the ribbons, the pleasantly but not too sweet peach brought back fond memories of that day sitting in the student union bar. The packing, much to my content, was easy as was the lighting. The taste is nice, not too sweet, though not quite as peachy as I would like, it's just a little too mild. The room note, however, is impeccable, and, though it does hit the back of the throat a little, tonguebite is negligible.

To sum up then, a delightful little smoke with alot of plus points, but sadly has one missing where it's really needed. If three and a half stars were available, it would probably be worthy. In the meantime though, it's not good enough four, but is for a very worthy three.

I've treated myself to some more of this and I've decided to whack it up to 5 stars. It's how aromatics should be - quality tobacco topped by quality casing. Peachy all the way down the bowl.

Found some hand scrawled notes from 2005 which provides proof that I once smoked this... What was I thinking? I was young and foolish, what can I say?

My notes suggest that it was a sticky mix of light and dark leaf with an aroma in the jar of peaches in syrup and vanilla. That must be how the tobacconist enticed me into trying it. I've noted that people said it smelt like candy, and that it didn't taste of much... How many such Cavendish confections did it take for me to learn this lesson I wonder?

The aroma from the blend has a brilliant sweet peachy fragrance to it and it looks a fair selection of the different tobaccos. A slightly "not so good" point is that it could use an airing period to lessen the moistness: it's not saturated, just a touch too damp.

Once my bowl is filled I introduce the flame and to be fair, considering the fact I was to impetuous to wait for it to air, it still lights well despite the extra dampness! The flavour coming from it reminds me of a fruit salad. The peach is lovely and fresh tasting, without being too much. Another couple of negatives to be found are temperature and bite; ouch! A good point now: nicotine, a real mid-ground amount: not strong, not faint but perfectly satisfying. The burn is even and consistent but it does tend to burn a touch quick if you (like me) are a bit of a voracious puffer! The room-note is quite full, yes, it has a slight fruity zing to it but it could be a little heavy for any anti-smokers.

A good decadent smoke, but for me it's too much of a novelty smoke, I would rather stick to more traditional blends.

I would give this around 2.5 stars if possible. If smoked very lightly, and cool, it has very pleasant peach notes, the sweetness is not too overwhelming. I prefer this for after lunch/brunch. Though straight out of the pouch, similar to other H&G Loose Aromatic blends, they smell much better than they smoke.