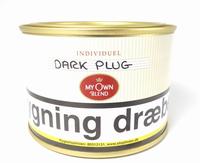 A hand-pressed plug version of the Dark Flake which is no longer in production. Burley from Malawi, African and Brazilian Virginias and black cavendish, all spiced with some dark fired Kentucky from the U.S.A.

Dark Plug is a bit of a disappointment. Being a novice pipe smoker at the time, I took a holiday to the beautiful country of Denmark and visited the ‘Danish Pipe Shop’ located in the heart of Copenhagen downtown. My favorite blend of that time (still today) was Dunhill’s Navy Rolls, so naturally I asked the tobacconist for a Paul Olsen blend closely resembling this. He recommended ‘Dark Plug’ and ‘Hipster’; I chose the former since they worked alongside Samuel Gawith for his blend and looked/ smelled promising.

Presentation: Tobacco is a plug and dark, hence the ‘Dark Plug’. It has the aroma of molasses, possibly hickory added in, and distinct sweet earthly smell. The plugs are stored in a plain 100g tin commonly used by My Own Blend. After I finished the tin, I cleaned it out and will use it for storage since it really seals up very nicely.

Taste: I am comparing this to Navy Rolls, since that’s what I was originally told it resembles. If you like Navy Rolls, Dark Plug is a somewhat deluded version of it: mild taste, no outstanding qualities, lacks the full flavor of Navy Rolls. The only way to describe it is: if Dunhill Navy Rolls were made in massive bulks, minus the delicate care and luxurious quality. Don’t get me wrong, Paul Olsen is very high quality, just this blend is very mild and lacking in flavor.

Afterthoughts: Looking back on it, I’m not sure why he even recommended Dark Plug, since there is no Perique in it like Navy Rolls. Perhaps I misunderstood him, could have said “Dark Pearl”, which I will also be trying in the near future. I will give My Own Blend/ Paul Olsen another chance, but this one was disappointing.

I have found that all of My Own Blend baccies lack substance. I have tried thousands of them over the years and they all have the same feature. Indeed, after the initial lighting they all taste the same. And they all leave my palette plastered with paprika.

And this is not the reason I smoke a pipe.

I conclude that it's a national taste thing. MacBaren have their bite, MOB have their burn. And a million Danes can't all be wrong.

Having said all that, Dark Plug is even more of a swizz. Its not plug. What you get is three briquettes that crumble to the touch. Not that that matters - just don't call it plug when it ain't.

The odour is promising, richness and roundness.

The initial light a delight. And then it's back to the beginning of this review.

Age When Smoked: Fresh from the shop.

Purchased From: Shop on the corner.

Similar Blends: Everything by Paul Olsen..