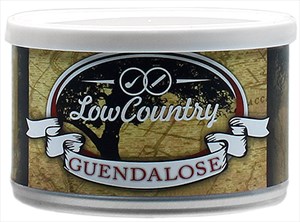 Along the historic Waccamaw River, roughly five miles inland from the coast of rural South Carolina, and just downstream of Brookgreen Island, lies a quiet, remote creek by the name of Guendalose. On quiet summer nights, it offers locals a much-needed bit of solitude, and countless moments of quiet reflection.

Paying tribute to this secluded creek, and to those moments of gentle respite, we have selected choice Red and Bright Virginias, our own Red Virginia Cavendish, fine Katerini Turkish leaf, a dash of spicy Perique, and exquisite cigar leaf to fashion a blend that readily evokes the flavors of a full-bodied, Nicaraguan cigar.

The major player is the Columbian cigar leaf, which is smoky, very woody, with a toasty sweet, slightly salty quality, and mildly nutty with a light coffee hit. The regular processed and cavendish red Virginias are dark fruit sweet and mildly tangy with some earth and a hint of spice and toast. The bright Virginias offer citrus, zesty fruit and some grass in a support role. The Virginias form the base for the other tobaccos, though you will always observe them, mostly in the background. The perique is a minimal addition, and I notice the raisin and fig notes more than the spice. That’s mainly because its pepper aspect intermingles with the more prominent Katerini component, which brings its own spice into play along with a woody, mild smoky sweetness. The nic-hit is closer to medium than it is to mild. The strength is medium to full, and the taste is slightly past the medium threshold. A little dry out of the tin, it burns well, cool, clean with a consistently smooth, moderate creaminess from start to finish. While the cigar leaf’s presence does crowd out the other flavors a bit (less so the Katerini), the other tobaccos will continually underscore the experience. Won’t bite and has no harsh or weak spots. Leaves virtually no moisture in the bowl. It’s not an all day smoke, but it’s repeatable. The after taste is very woody, smoky, mildly sweet. The room note won’t impress the ladies, but this will give you a chance to watch your television show in peace. Three and a half stars out of four.

I note my old pal Gentleman Zombie ponders that this might benefit from a little ageing. Well, this tin's from 2016 and the components seem to have married perfectly!

I make no suggestion that the cigar leaf isn't the most formidable of the tobaccos, but it doesn't mask the other's with a dry, dull, clumsy, cigar flavour. The Turkish, Perique and Virginia form a tasty support: fruity, a little spicy, and somewhat fragrant. The burn from it's good with it's consistency, but can become a touch warm and the smoke can give a little nip to my tongue.

Nicotine: above medium, with ease. Room-note: not 'great'.

Guendalose? There are a few negatives, but the flavour raises the result. Recommended:

This is a good smoke as is, but I think it will benefit from a little aging. The components don't seem as "married" as they should be. There seems to be a degree of separation with the Virginias and Perique on one side and the Turkish and Cigar leaf on the other. Perhaps it's just too fresh right now. It's most noticeable in the first half of the bowl. I have to say though that there are times during the second half that the flavor is sublime. I have been of the opinion that you just can't replicate a cigar in a pipe bowl, but during the times in the second half that this all comes together as it should it gets damn close. I stashed a couple of tins in the cellar and I'm going to jar the rest of this tin and revisit it in about 6 months. 3 stars for now.

Body is a shade above medium. Taste is medium to full. No added flavorings. Burns very well.