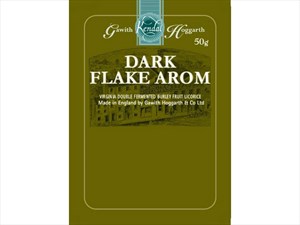 Gawith Hoggarth's Dark Flake is a popular tobacco among those who a full smoking experience, in both body and flavour. Comprised of fired and dark air cured Virginias, before being hot pressed in cakes (uncut plug). The Unscented version (U/S) is popular in both flake and plug form, but as with all tobaccos from Gawith & Hoggarth, they can be flavoured. This “aromatic” blend is given a traditional “British” topping which consists of tonquin, maple and liquorice.

As you would expect with the Dark Flake, this tobacco is powerful with a strong spicy and musky flavour. The toppings enhance the almost cigar like flavour and bring a little brightness into play. This slowly fades as you make your way through the bowl, leaving the final half more a natural taste. Dark Flake packs a real punch in the nicotine department and we not suggested for those new to pipe smoking.

The Virginias are boldly vegetatively earthy with plenty of fermented tangy ripe dark fruit, earth, wood, floralness, and a touch of tart and tangy citrus, cigar and spice. The nutty, woody, earthy, toasty, lightly molasses sweet burleys feature a bit of strength in an important support role. The tonquin is a little more obvious than the maple and licorice toppings. They moderately tone down the tobaccos. The strength and nic-hit are strong. The taste level is just past the center of medium to strong. Won’t bite, or get harsh, but it does have a few rough edges. Needs some dry time. Burns cool, clean and slow with a mostly consistent sweet and rugged, earthy, woody, mildly savory flavor from top to bottom. Leaves little moisture in the bowl, and requires a fair number of relights. Has a pleasantly lingering after taste, and stronger room note. Not an all day smoke, and I recommend a small bowl for this one.

This is the sort of blend I expected I'd want to run a mile from! I remember smoking a some of the scented flakes over the past few years and finding them totally nefarious, but this, although it goes against the grain of what I consider myself to like, is a good smoke.

My 25g pouch contained four long, dark (no surprise), flakes. Very often loosely sold blends have a good hydration but Dark Flake's too damp; it needs airing. The colour was no surprise, and nor was the pouch-note: it smells a bit like perfume.

Now, the smoke is very good. A little perplexing, the perfume note's absent from it, but there is a fairly strong liquorice and maple note. Although the topping's quite heavy, it doesn't cancel out any of the tobacco flavours: of the two the Burley's far stronger than the Virginia. I find that Dark Flake Aromatic's a far more enjoyable smoke if it's sipped gently, that's not due to tongue bite, instead it can develop a bit of a yucky taste on the sides of my tongue when it's chugged. The burn from DFA is absolutely superb: it gives quite a cool smoke, doesn't require much attention, leaves a very white ash, and burns dottle free. Tongue bite? None of it!

The topping's not as ludicrously strong as I anticipated, but something that is very strong is the nicotine! And the room-note's quite pleasant, not great, but not bad.

I like this, I think it's a very good, no-frills, aromatic blend.

Just tried my first bowl today. I love it. Burns nice and slowly. A robust smoke. Still trying to get around the flavours and how to describe them. After reading the reviews I was apprehensive regarding the nicotine hit, as I don't really know how to telll what that means. Hoping I wouldn't fall on the floor while cooking. I smoked it with a wee drop of whisky. Thoroughly enjoyed it, didn't fall down but felt very satisfied. I like it and will probably be buying some more.

It's deceptive just like sweet sherry: you may drink a lot of it and it's too late when you realise you're completely drunk. After the first third of the bowl the sweetness fades away and what starts afterwards is bearable only to a really tough smoker with lots of curly hair on his chest, neck and shoulders. It's one of the strongest tobacco I know. After years of smoking strong Kentucky roll-your-own cigarettes I thought I got a hypertolerance to nicotine (f.ex., I routinely inhale Black Birds Eye, and Nightcap barely satisfies my nic crave). But this weed almost gave me spins!

Super-sweet and super-strong. It pushes to the limits in just everything: fullness, flavour, aroma and strength. If you are after some FULLER stuff (as I am), definitely try this sweet poison.

Oh Man this is the tobacco from Heaven! this was the first words from me after lighting. Very woodsy musky and that Tonquin bean very much present there. I still have a bottle of Dark Obsession which consists of Tonquin bean I immediately recalled that smell. A very balanced Aroma of musky and Lakeland present through out the bowl which faint toward end and nutty burleys takes over. A very fantastic and enjoyable smoke definitely not for a novice as nic hit is felt very early from quarter of a bowl. Bravo Gawith Howard! All the way four stars!

At least half the batch I got was in hard, dry slabs, not unlike those bricks of tea from China. They proved too tough with my trusty chopper, so I ground them finely in a coffee grinder.

Poured into a small bulldog it smoked really nicely. There was pepper and spice, all very nice. To the fore and throughout there was Pepsodent, of all things.

Come to think of it, it might work well rubbed into a pork chop for the barbie!

Nuclear bomb in strength, very pleasant to smoke. Tobacco with unique character. Not an everyday smoke, but 100 % worth to try it. Personally I'm using to mix with other blends.