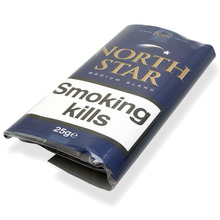 High grade Virginia and burley blended together minus added flavourings for that pure taste.

In the pouch, North Star offers up more of a Lakeland style scent than is found in the pipe. This shag needed some dry time, but due to the thin cut it took very little time under lamp (gotta love those old incandescent bulbs). When packed properly on the firm side, NS is mildly sweet, and about medium-low on the Lakeland flavor scale as there is plenty of tobacco flavor. Both the Virginias and Burley make themselves known and interplay nicely but not in a complex way. It’s about medium in strength, but can be notably stronger when pushed. There wasn’t any bite at all and as long as it’s packed properly, it won’t burn hot either. This is one of those “set it and forget” type tobaccos that I like to toss into a cob and pretend to do a little yard work with…..

I bought this more out of curiosity than want. I wondered if a tobacco marketed as 'budget' would be fit for a pipe, or fit for the bin!

As it turns out, it's pretty good; it tastes of a higher quality than the price implies (I paid £3.10 for the smallest 12.5g pouch).

As expected, the pouch contains a finely cut blend: it's not exactly cigarette fine, but quite fine for pipe weed. When I first lit mine, or tried to light it, I realised it was too damp; that's not a good thing as I'd bought the loosely pouched version from Black Swan instead of a sealed number. But after an hour or so drying time it's good to go! That's the negative dealt with, now over to the positive: the smoke is more like what I'd expect from a higher end VaBur. It's nutty, and woody, as if there's more Burley than Virginia. Other than that there's not too much to say. It's a good blend, with medium nicotine, a decent burn providing it's been aired, and the room-note's not too heavy.

Considering the price and quality I think three stars is perfect.

A very good shag offering from our Cumbria friends. Virginia and burley and that's it. In the pouch there is no immediate nose but digging a little deeper you do find a woody mustiness and a nice tart tang from the Virginias. This is damp and packing and lighting straight away will result in a hot smoke with tongue bite abound. But add some dry time to it and pack a little former and it does reward with a pure uncomplicated smoke with a decent amount of flavour, which includes that woody mustiness and the tang from the Virginias and wisp of sweetness now and then.

Personally I like this, I use it to break in new bowls as it leaves no ghost and helps the break in along nicely. However if you are budget restricted and this and the dreaded bayside is on offer, please take my advice and go with the north star it might be a touch more expensive but it is well worth it. The best shag tobacco I have tried and perfect if you fancy a smoke but want a good no frills, no bells or whistles smoke that will deliver.

Oh and quite strong in the nic department as well!

The Burley used here is pretty good. Nutty and earthy with a nice note of cocoa. It tends to obscure the Virginias though. Can't get much flavor from those. They do offer a little sweetness and, unfortunately for me, a mild bite. Burns a little warm, but nothing serious. For me, it's just a so-so smoke.

I personally detect very little to no Lakeland in this tobacco. I taste a good woody flavor with a raisin-like accents. Has a sweet taste even with no casings. Moisture content to me is good in a pound of bulk. The room note isn't too bad but a little plain "smokiness"... but fairly light so doesn't badly offend. I pack it loosely on the bottom and tighter at the top.. burns clean all the way to the bottom of the bowl. Medium strength that doesn't bite. A pleasant, straightforward smoke.

As this is based on a one oz sample that was bought in bulk rather than in the pouch, I feel like a word on reviews is needed. Personally, I tend not to upvote reviews that are based on less than an ounce at minimum, and I further believe that my own reviews are useless to most people unless I've really gotten to know the tobacco at hand. Otherwise, they are valuable only to myself, and even then that value is dubious. This is a prime example, as my sample tasted nothing like the other reviewers have stated. I could have gotten an overdry batch with the Lakeland flavoring leeched out, and I urge readers to lend more personal credence to SteelCowboy's or the other reviewers on this blend (at least!).

This came as a blonde colored stringy ribbon. The bag aroma was very faint and of only tobacco. I got no Lakeland scent at all. Smoking this revealed zero Lakeland essence as well. And whatever character the Virginia and burley may have had during the initial blending process had mostly disappeared. What remained was a very cigarette-ish blend that got nasty and sour at the slightest provocation. Packed tightly (as I do most if not all shags) and sipped daintily, there was some nuttiness from the burley and some sourness from the Virginia. Smoked straight, there was little to recommend this blend. Used as a blender, it was fairly useless as well, perhaps mostly since I didn't have many other shags to blend with it. G&H's own Kendal Kentucky overpowered this, even mixed in only 10%. North Star (as it came in my bulk baggie) is overall lacking in character and might make a decent cigarette at best. If the occasion arises, I may try another sample, as I just don't think mine was stored properly before it arrived.

Found this in a small newsagent in Dursley, of all places. The shopkeeper insisted this was pipe tobacco. It was either this stuff or clan. No contest really.

It looks more like a dark shag cut, than pipe tobacco. It has very little smell, virtually no taste and certainly no room note. It burns very quickly and is quite moist from the pouch, breaking down into a silver grey ash.

I have to say I'm not entirely convinced this is pipe tobacco as it seems to share many of the characteristics with rolling tobacco, despite the Gawith's provenance. It's very tempting to put it to the test sometime.

It's not entirely a dud then and strangely satisfying if you are in a hurry, but I can't recommend it, although I'd buy if there was nothing else.

It's not a horror so I'll just give it the benefit of the doubt and says it's shag.

Purchased From: Newsagent in Dursley