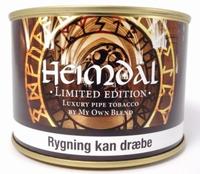 A new addition to the Nordic Mythology range. Heimdal is a mix of Golden Virginia, Burley, and Cavendish. Accompanied by the flavour of Kirsch, Vanilla, Maple, and Raspberry.

Paul Olsen - Heimdal (My Own Blend).

This is a very good aromatic, with aromatic being the key word here. Aro' guys will love it but fans of natural blends won't.

There's not really much to be said about the flavour of the tobaccos', it's the usual heavy aromatic blend; the toppings kind of push them aside! The aromatic additions have been included rather heavily, with the kirsch and raspberry being the weightiest, at first. After the initial burn's settled the maple gives a notable sweetness, with more of a characteristic taste compared to sugar alone. This continues to strengthen until about a third of the bowl's been piped. The vanilla also takes time to appear, but never becomes sticky.

There's not too much nicotine in Heimdal, it's mild to medium (mild more so), and the room-note's very pleasant.

This is a very well made aromatic. Personally, I wouldn't have it as a go-to, but it deserves a high recommendation based on its quality alone.