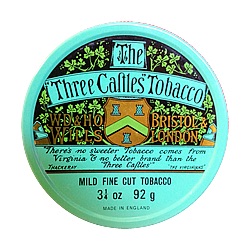 There's no sweeter tobacco comes from Virginia & no better brand than the Three Castles.

This was a simple uncomplicated shag cut Virginia with a lot of tart and tangy citrus, grass, hay, light bread, rough and floral notes. While it was also sold for RYO, I smoked it in a pipe only as some people did. The nic-hit was just past being mild. The strength level was in the center of mild to medium. Had a very consistent flavor from start to finish, and didn’t bite or get harsh. Burned a little fast, and needed to be puffed at a slower than usual pace to avoid a hot pipe, and a few cigarette notes. Left virtually no moisture in the bowl, and hardly needed a relight. Had a lightly lingering, pleasant after taste, and room note. Was an all day smoke.

Three Castles may have been the best handrolling tobacco ever produced. Incredibly subtle, it wasn't for every taste. Its exceptional mildness was the result of some kind of esoteric method of water treatment borrowed from the ancient Chinese; I cannot recollect the specifics, but I believe the leaves were soaked before being cured, removing a fair amount of nicotine.

I do still remember the scent of the tobacco, though: hay and brown sugar, a vague whisper of lemon. Room aroma was kith and kin to a classic straight Virginia: something like baking bread, and very acceptable to most non-smokers if rolled in a good quality hemp or rice paper. It was a fairly damp tobacco; Imperial cased it with humectant before tinning.

A knockout smoke, all told. When I started smoking it I'd tried nearly every handrolling tobacco I could find. Three Castles was entirely unique; it burned cool, was easy on the lungs, and had a marvelous flavor. If I ever smell it burning again, I'm going to have one whopper of a Proustian moment.

Nothing like it, before or since. A few come close, though, most notably Auld Kendal Gold, if you can find it in the original fine shag cut. Stokkebye Danish is a solid choice, too, although it's a little more citrus forward. McConnell Special London is the wild card: sometimes it overwhelms with citrus, sometimes it's more even-tempered, like Three Castles.

A brand revival was attempted a few years back. Disaster. If some enterprising person could bribe the original formula out of an old Imperial employee and resume production in the U.S., they'd have a hit on their hands.

I got a 3 bowl sample of this and D&R 3 Sails from a friend. This tobacco was estimated to be about 20 years old. It was a yellowish-brown shag cut with an aroma of fine hay. When I worked at a pipeshop many years ago, I bought 3 tins for the shop, not realizing it was cigarette tobacco. The shop employees opened one tin to share in their pipes and the other two were still there years later when the shop closed. Two demerits for me! I think most of the opened tin got tossed. My memory of smoking a bowl or two of this way back then is beyond hazy, but smoking it today tells me why.

I can't imagine anyone smoking this in a pipe even occasionally. It's clearly a RYO cig tobacco. The flavor is extremely flat, which is fine since the act of inhaling dumbs down tobacco flavor anyway. There is a wisp of citrus, plenty of grass and hay, but it tastes more like not inhaling a Winston would taste rather than something for the pipe. There are much better choices out there, and I don't recall any Virginia-smoking pipesters being impressed with it back in the day. Even snorking this one didn't bring out much flavor. It's something to smoke if you like a nice, unobtrusive smoke and it doesn't taste bad - it barely tastes of anything at all! Might be a good smoke for yardwork or whenever your attention will have to wander from what you're smoking. Best left to the pages of history... except D&R seems to have brought it back! On to that review....

Not sure why this is in this database, in the UK it was sold as a hand-rolling tobacco not a pipe tobacco.

But since it's here, and I remember hand-rolling it from the 80s I'll give it a review anyway.

Three Castles was a very thin-cut hand rolling tobacco, the strands often being several inches long. It was a very pale yellow in colour throughout. Very easy to handle and roll in paper. The pouch aroma was of very little, mostly a hint of ea de cologne or something very similar like a cheap aftershave, no noticeable tobacco aromas at all.

On smoking it tasted flat, nothing there at all, except a faint haze of ea de cologne or cheap aftershave. No noticable nicotine either. Like smoking hot air.

And boy did it bite - like sucking on a blast furnace. Not just the tip of your tongue but your whole mouth. And that's as a roll-up, I dread to think what it would have been like in a pipe. The acrid smoke produced didn't smell of much, but caught in spectator's throats.

When I was a student in 79-82 lots of us hand-rolled and the campus shop sold Golden Virginia and Old Holborne in huge quantities. Out of all the people I knew back then who smoked only one bought Three Castles more than once, and he said that was because it was cheap.

I'm not surprised it's no longer available, and it probably isn't missed by many.

Pipe Used: none, this is a rolloing tobacco