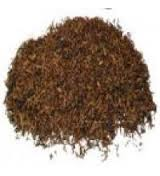 Quite a fine, exceedingly dark shag cut blend (although it says ribbon cut, I feel it's more of a shag).

To me, the pouch has a bit of a bizarre aroma: strongly floral, and almost like eucalyptus. The smoke is a lot different though; A LOT DIFFERENT. There's more of a dark fired note, I could imagine someone saying "this will make a man out of you"! I'm not sure where the heck the pouch-note came from!

There's no way this is just a straight Virginia! I'd say, judging by the flavour and the colour, it's got to have some Kentucky in it; it isn't half as grassy as a straight Va should be.

The burn's consistent from Drumadoon, and surprisingly for quite a fine shag, it doesn't burn too hot. For the smoke to become warm, it has to be puffed super harshly.

This gives a pretty hefty wallop of N, it's not stupidly strong, but strong nevertheless.

I'd expected Drumadoon to be a bit of a bore, the description implies 'a bit of a mundane smoke'. That's a wrong assumption though; it's by no means the best blend I've filled my pipe with, but it's definitely worth a recommendation.