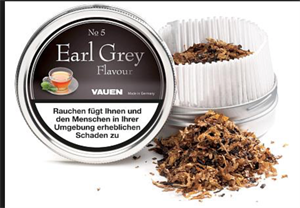 This luxury blend is carefully composed of broken flake, black cavendish, various Virginia leaf and burley. The finesse and fresh taste has been achieved by the popular bergamot that has made the noble namesake "Earl Grey" world famous.

Notes: Formerly known as "No. 5 Earl Grey Flavour." Due to new regulations this is now called: "N°5 Oxford Blend" and has a simple blue label, like all Vauen blends have now.

The nutty, earthy, woody, burley takes a small lead. I believe a little nutty, earthy, lightly spicy Kentucky is in the mix as well as a few pinches of spicy, plumy perique. The grassy, citrusy, earthy Virginias play close to the same level as the burleys. The sugary black cavendish is always obvious as the third star in the blend. The caramel topping is just a little noticeable, but the most important topping is the bergamot, which gives this an “Earl Grey” tea essence. The orange and citrus toppings provide fair competition. I also observe a trace of vanilla here and there. The toppings sublimate the tobaccos a lot without completely drowning them out. It starts out strong, but quickly settles down to a medium strength blend, while the taste is a touch more potent. The nic-hit is almost in the center of mild to medium. Won’t bite or get harsh. Burns fairly cool and very clean at a slightly slow pace with a most consistent favor from top to bottom. Leaves little moisture in the bowl. Needs a tad more than an average number of relights, and the after taste pleasantly lingers. Not an all day smoke, but it is repeatable at some point during your smoking day. Two and a half stars.

I bought this because I was told that it is reminiscent of Earl Grey tea and I love Earl Grey tea. Taking a sniff, it smells like Earl Grey tea. Smoking it gives you an orangey, citrusy taste every so often, but mostly it was extremely mild.

I probably needed to dry the tobacco a bit, because it came in the tin very moist. I expect it was very fresh as it was sticky and dark.

The smoke was very mild. Not much of a persistent scent or taste, but every so often I could smell/taste citrus and orange. About 20 minutes into smoking, however, I became bored with the tobacco and didn't feel like continuing. The flavor lingered after smoking for quite a while, too, with me randomly tasting orange over the 20 minute period after being done with the bowl.

Overall, it was a nice smoke, but I don't think I'll be including it in my regular rotation. I'll probably use my small nosewarmer pipe to smoke it (so that I don't have a chance to get bored again) and I'll probably save it for specific times when I feel like smoking it.

Citrus Virginia, nutty burley and a slight vanilla to the Cavendish are the main components here. With these quality varieties combined with bergamot this blend sends me to my happy place. I am a big fan of Earl Grey tea and Oxford blend delivers for me. Tin note and taste are nearly identical. Loads and fires well, delivers thick white/gray flavorful smoke with no bite or goop. Consistent flavor throughout the experience and leaves little to no dottle with the remains being a fine gray ash. The flavor reminds me more of the Russian Earl Grey tea than the standard English blend, a bit more lemon peel. Leaves a excellent after taste and very good room note. This is a blend the just seems to beg me to smoke it, repeatedly! Will have to say this is one of my top 3 favorite tobaccos and my favorite aromatic. Will lay in several more tins of this for sure. I give it a 4 because that’s the top of the scale. One note here, if you disdain the taste of Earl Grey tea, stay clear of this one(that leaves more for me!).

Like most who have bought this blend, I was intrigued by the advertised Earl Grey tea flavouring. It is a taste that matches wonderfully with tobacco, in particular bright virginias with their citrus notes. Black tea in general also matches well with "deeper", earthier & smokier tobaccos, such as nutty burleys, red virginias and even latakia. I recommend matching various tobaccos with different types off teas, it can really enhance the experience.

Having noted this I was excited about this blend.

One thing about this blend, however, made me frown in disbelief: Black Cavendish? Really? I could not for the life off me see how this caramellish tobacco would match well with Earl Grey, especially not if it was the sweet vanilla-flavoured kind usually deployed in aromatics, which, after alll, is the type off blend is what this professes to be.

Is this a generic candyomatic formula with some fancy new earl gray flavoured chemical thoughtlessly applied as a topping just before shipping? Remember, those flavour additives can be ridicolously accurate. There is a brand off sparkling water here in sweden flavoured after a specific coco-coconut-pastry, and it tastes exactly like the real thing.

Now I obviously don't know how exactly it has been flavoured, perhaps it's by organic essential oil from bergamott and expensive, labour intensive black tea extracts quadruple distilled by aboroginals in the mountains off india.

But I can say this: the flavouring has been thoughtlessly applied to a generic VA-Bur-Cavendish candyomatic base.

When you open the tin, your nose is raped by an artificial sickly sweet smell and your fingers are greeted by a sticky mess off tobacco drowned in sugar, or worse. It does not smell like normal cane sugar, it smells more like those sweetening pellets that exist for coffee. My guess is that the sauce is corn syrup based on the smell & consistency.

Once your nosed has accustomed to aggressive sweetness you can actually make out a very pleasant and astonishingly accurate earl grey tea smell, the citrusy notes being most prominent.

When smoked, you can mostly taste the candyomatic base off caramelly/brown sugar black cavendish with some smooth vanilla. The sweetness is ridicolously strong. Beneath it there is a wonderful earl grey tea flavour is there with some citrusy VA & some pecan nuttiness (burley or the sauce, probably both). But it is all heavily subdued with the cloying, sticky, disgusting sweetness. It seems create a layer off sugar in your mouth that seems to make it impossible to make out any kind off nuance or complexity which might be there. It's such a shame because you get a hint off the potential that an Earl Gray flavoured VA/Bur tobacco has. The aggressive, artificial-tasting sweetness and awkward Cavendish ruin this blend. The flavours do NOT mesh well at all. This blend leaves me with the confusion & disgust you would get from ordering a steak and getting it drowned in chocolate sauce.

Drying out helps to make it less steamy. But nothing seems to cure this baccy from the flavour-blocking brown-sugar-tasting sauce.

This tobacco is one off the strongest ghosters I've ever come across, only Samuel Gawiths Grousemoor beats it.

I should have listened to that initial skeptic in my head, and I should have remembered how dissapointing Vauen's black pepper tobacco was (how can you make a pepper-flavoured tobacco and NOT include perique??).

I can see someone liking this, it does after all taste like sugar, earl grey tea & tobacco, which are all things people like. But to me it seems far too thoughtlessly blended to deserve anything but the lowest score. Above all I taste missed potential.

It's funny sometimes how a certian flavor misses in one application and hits in another. I love all tea.....except Earl Grey! So why then would I bother trying Oxford Blend? For starters, I've tried most of Vauen's tobacco's and enjoy them. But this one made me skeptical.

The flavoring is definitely bergamot, the main flavor in Earl Grey. Second is a nice citrusy tinge. I do detect some vanilla or even honey but it's way in the background.

As for the tobacco itself, the Burley carries the way with Cavendish a minor player to add some sweetness to the citrus.

Burns well, bite is minimal, doesn't make a mess of your pipe(it will ghost a briar so I advise trying it in a cob if you're not sure about the bergamot).

If you're looking for a different aromatic, try it! I'm glad I did. I Might even give Earl Grey tea another try! 4 stars!

Similar Blends: The Bergamot makes this blend a one of a kind..

Interesting citrus aromas in the tin, make sense with the original name of this blend. Nice room note, from time to time fresher with traditional bergamot flavors, but after a while is just flat and turns to a soft smoke without complexity. Is nice to taste, but probably not the best option for long and pleasant periods, nether for daily tobacco.

I purchased this because I too like Earl Grey tea. However, the overpowering orange flavouring put me off. It tasted like orange crush in a pipe. So I jarred it up and forgot about it for over a year. When I dug out the jar and opened it the orange flavour had subsided just enough to deliver the taste originally promised. Plus I can taste the virginia's and the cavendish. I could see this becoming one of my regular smokes. Only problem is it seems to have gone out of production. I can't find it anywhere.