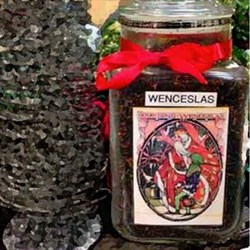 From Strauss: It has been described as a spiced berry flavor that is sweet but not cloying, with a slightly smoky nutty note. It contains burly, some golden and dark cavendish, and magic.

Notes: Is only available during Christmas time by calling Strauss and ordering over the phone.

The raspberry is the dominant topping, aided and abetted by some fruit (I detect mango and another may be present), light coffee, and some spices, including nutmeg. The black cavendish has a very mild sugariness. The burley is nutty with a little earth and wood while the gold cavendish offers a drop or two of honey, some citrus and grass. The tobaccos are sublimated by the toppings, but you’ll notice them to a small extent, particularly after the half way point when the richness of the toppings weaken a little, especially at the finish. The raspberry doesn’t do that as much as the other toppings do. Won't bite. Has little nicotine. The strength is mild while the taste level is just short of the center of mild to medium. Creamy smooth, it burns at a moderate pace, but the tobacco is moist, so it requires some relights. Leaves little moisture in the bowl. You may want to give it a light dry time. Has a pleasant, short lived after taste, and a sweet fruity room note. Gets two and half stars because I occasionally get a tart alcohol taste that I find distracting when it shows itself to my taste buds, and loss of flavor depth in the last quarter of the bowl.

Been smoking this for quite some time and it remains a great alternative in and out of my rotation. There is a subtle sweet undertone as well as a subtle soft raspberry like experience - but not as prominent and dominant as it smells when opening. More like a subtle flavor softened by buttery sugar/honey and a slight hint of vanilla. The flavor does not always remain steady and dominate as other flavors peak through in and out as does the sweet tones - something I actually enjoy about this blend. Maybe the little "magic" that's in the description. There are nutty undertones from time to time and I pick up a slight almond/marzipan type nuance as well and maybe even a hint of cardamom. Reminds me of an outstanding sugar coated short bread/linzer holiday cookie with berry/currant lIke notes from time to time. This smoke is best with a slow and soft cadence. You don't want to smoke it like a chimney if you truly want to enjoy it's variation and sweet notes. If you like surprises, nuance, and trying to figure out what's in a blend, there's plenty of enjoyment to be had with Wenceslas.

This comes around once a year after thanksgiving up until Christmas time or at least until they run out and is a delightful mixture to consider for holiday smoking. The room note is amazing and the women folk will appreciate it, and the taste is great. It really tastes like raspberry or blueberry cobler with some heavy whip cream.

This was a pretty hard one to pin down. It started out as a pretty uneventful smoke and remained pretty mild throughout the smoke. I had not read the description of this blend prior to smoking. In the first quarter of the bowl, there were several instances were I got hints of flavors which I couldn’t quite pin down. The flavor that I was able to pin down was kind of nutty. My first impressions or the other flavors were perhaps some type of berry but honestly I could not pin it down. I also thought there might be some hints of cocoa or chocolate but again very subtle and nothing overwhelming. Most of the flavors were noted about half way through the bowl. After smoking my first bowl of this I did go and read the description and some of the online reviews and it looks like I was not far off on my initial impressions as compared to others that had smoked this blend.

Received as a gift, I smoked several bowls without knowing its make up. The berry component is noticeable, but not dominant, like other berry formulations. I get a back note that near simulates a root beer effervescence and it is quite enjoyable. Burn rate is non fussy despite some moistness and I found it to be a good choice as an end of evening smoke. An admirable Holiday blend.