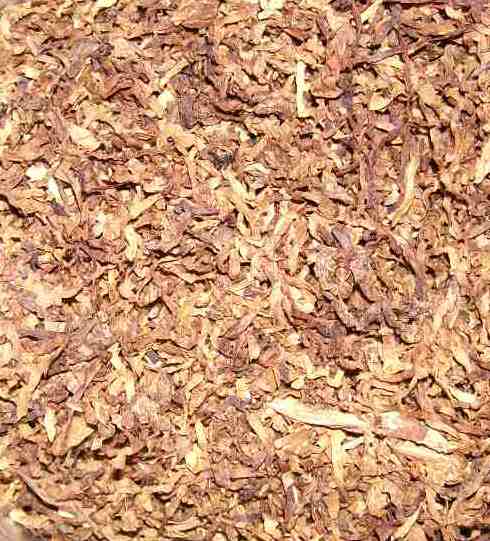 Cased hand stripped flue cured Virginias which, after cutting, is stoved. A finer cut tobacco for an easy smoke.

Got some of this Sam Gawith blend during a time of mild exasperation when all of my regular Kendal blends were completely absent from the inventories of my usual suppliers. (I just hate hunting down new ones and stubborn loyalty as a virtue and dislike of change is a personal personality quirk of mine [a usual pipe smoker trait?])

At any rate I ordered some as the lesser of two evils - substitute or derth-- and was mostly satisfied with the purchase. I wouldn't claim it as a really good substitute for my usual choices of Full Virginia Flake, Medium Virginia Flake and Broken Scoth Cake as well as the Virgina-Perique blends of both Gawiths but it was not bad at all.

The cut of it was a bit strange for me but the taste was acceptable as was the burning qualities and filling qualities. The Room Note was just about irrevelant and no problem and the strength was quite reasonable if a bit on the weaker end of the spectrum. I've since sampled the Gawith-Hoggarth Bright CR Flake which is similar to this taste but much more full and "complex" (whatever that really means)This one(Bright CR Flake) I will keep as a regular stock up blend - definitely!

Will I reorder more?Probably,especially if it is the best choice available. Would I order it for a regular in my collection? Probably not, but it was acceptable.

Sorta like taking your cousin to the prom and learning that she could dance really well and was fun to be with. It wasn't the best but what the hell it was all right for what it was.

Although the Gawith brand has an excellent reputation, this tobacco doesn't do much for me. It's a light brown, wiry shag that looks very much like the old Drum cigarette tobacco. My batch of this has aged quite some time and I don't notice much scent of any kind in the tin. Upon lighting, it's just a strong, fairly sharp tobacco with a medium taste but not much flavour. A previous reviewer described the taste as "brown," and I must say that ironic description is the best one can do for this stuff.I don't see much point in fooling with this unless you're a Gawith completist. Brown indeed... :)

As I have mentioned in a previous review, the Lakeland series (Light and Dark) is not one to be missed by those who love Gawith tobaccos. Having tried Lakeland Dark, I decided to give its lighter sibling a try. As before, this tobacco contains most of what people seem to like (and dislike) about S.G. in general. The blend has the familiar Soapy/floral scent in my sample bag, though like the Dark version, it isn?t nearly as overwhelming as with some S.G. offerings. Mixed in with this is a slightly sweet, grassy smell, touched with perhaps a very faint hint of spice. The tobacco?s appearance is a roughly equal mixture of medium and lighter browns, very thin cut into medium to longer strands. These form a loose mass that is very easy to separate. My sample had a low to medium moisture level, roughly similar to that of GLPease tobaccos. Packing was fairly easy, though somewhat difficult in a narrow bowl. The leaf lit very easily and burned well, needing roughly the average number of relights. In the 1st third of the bowl, the overall flavor may be best described as ?brown?, but not in an ?earthy? way. The smoke is fairly complex and neither sweet nor dry, with a slight bite when smoked somewhat quickly. The flavor is strong, but this is not a ?full? tobacco by any means. The usual harshness in the mouth and throat is present, too, though not quite as much so as with Lakeland Dark. The second third of the bowl is somewhat less harsh and sweeter, with a bit more body and flavor. The continued complexity makes things interesting; at times, I don?t even notice the harshness. There is no moisture to this point, and no further bite. The final 1/3 is similar to the second, though at the very bottom of the bowl, the flavor intensity increases. There is a bit less sweetness, and the harshness continues to diminish, though it never quite disappears. Though I hadn?t noticed at first, when I try to stand up I can tell that this is as strong, nicotine-wise, as Lakeland Dark; use caution and a smaller pipe! I was able to smoke straight to the bottom, leaving the briar clean and dry. Overall, this is basically a ?light? version of Lakeland Dark. Both have excellent flavor and are of high quality, aspects that for me are ruined by the harsh overtones. Again, if you can ignore these, you will most likely enjoy this very much, perhaps as an early day tobacco (If you can handle the kick). I will likely not purchase more of this when I run out, since I enjoy many blends that have similar flavor but manage to avoid the harshness. But, to each his own. :-)