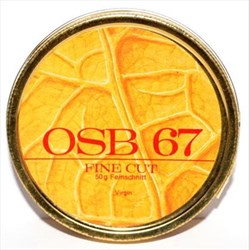 Selected tobaccos, matured by the sun and carefully processed to guarantee the genuine flavor of tobacco

They do this because the cigarette rolling market is 30 times larger than the pipe tobacco market.

This is another wonderfully versatile tobacco from Planta. Just like its counterpart Akropolis it is a very old pipe tobacco recipe which also is useable for cigarette smokers. It's cut is a very fine shag cut, think rolling tobacco fine, which demands small to tiny pipe bowls. And due to those tiny bowls it is the perfect smoke for a break at work. Usually you will have 10-15 very tasty minutes of joy. Or, should you fancy those, a very nice cigarette break.

Upon opening the tin you will be greeted by brown Virginias without any topping or flavouring. Unfortunately out of the tin it does not offer any great olfactory experiences, but it does not smell bad or stale either, just very faint.

Packing, or rather non-packing, needs some practice as with all shag cuts that fine. It is incredibly easy to overpack and have hard lumps formed in the tobacco strands. But after a couple of bowls you will have packing down and then it's all easy going. Lighting is a cinch and burning properties are excellent.

The tobaccos used are of excellent quality even for us pipe smokers. The cigarette smoker will have to walk many, many miles to find something even remotely comparable in quality. There was a time when all cigarette tobaccos had this high quality level. Good old times, long since gone.

Taste is on the sweetish and honey side of virginias, not so much on the grassy side. For the pipe smoker this is a full tasting virginia with nothing at all to be missed. I wish they would offer this blend in flake cut as well, because it would be a marvelously good tobacco. But for the cigarette smoker this will be a sweet, gentle and very flavourful smoke. The only drawback for the cigarette smoker is that this is the kind of virginia prone to be smoked to hot and then nipping your tongue. This, for me, was no issue when smoked in pipes. But as cigarettes i had to really restrain myself from puffing to hard. But if you can manage to smoke it slow enough then you will be hard pressed to find anything that offers that much fun in cigarette form.

Pipe Used: Use only small to tiny bowls.

Age When Smoked: They don't print production dates on it.

Well, I’ve had the opportunity to take some samples of this tobacco from a friend who had a tin, and he gave it to me for the sole purpose of making a review. He asked me to write a review for this tobacco, and since I’ve seen that tobaccoreviews only has only review thanks to “Telling it how it is”, I’ve thought that it’s worth telling another opinion. When you have more opinions, you have more details and you can have a better clue of how a tobacco can be, but it will never be 100% the same as you experience it (or... yea, actually I’ve found some reviews that were describing the same experiences I’ve had with those blends).

Now, without other stories lets get to the point. I’ll review it both for the pipe and the cigarette.

And I’ll begin, as always, with the opening of the tin. First of all, it’s interesting because the tobacco was not wrapped in a paper but in a thin, transparent pouch inside the tin. I don’t know what that does on the long term for a tobacco, but anyway.

I was very intrigued by this shag cut, because I’ve never smoked shag tobacco in a pipe. When I took it in my hand to feel the humidity, I couldn’t tell if it was wet, dry, or just good to smoke.

Contrary to what our friend “Telling it how it is” said about the smell, I actually like the smell. Why? Because it smelled like tobacco. Even when I smoke cigarettes, I use to first smell them. I love the smell of cigarette tobacco, and this OSB 67 is very close to the smell of a good cigarette tobacco. If you get rolling tobacco you will probably feel the same smell, which I personally like. It smells like real virginia tobacco, sweet with some hay. But honestly, if I didn’t know this tobacco can also be used in a pipe, I would’ve sworn it’s rolling tobacco.

So, the tobacco seems to be perfect to pack it up, it doesn’t need to be dried so I’m packing my pipe, a Savinelli Porto Cervo 628 (bent brady shape). Like I said, I never smoked a shag cut tobacco, and I think this is the easiest cut for packing your pipe, but I might be wrong.

Lighting the tobacco was very easy, I just needed one match. It started to burn evenly, it doesn’t go out, and you feel real virginia taste from the first smokes, but at the same time it’s also very similar to cigarette taste, but this would be like a very good and sweet tobacco for cigarettes which you otherwise wouldn’t find in normal cigarette packages.

It doesn’t overheat, but the thing is it actually smokes very fast. I just smoked it for 5 minutes and I’m already to the middle of the bowl. Might be the cut.

There’s just a subtle sweetness in the tobacco, but somehow it doesn’t really taste like real pure virginia you would find in a straight virginia pipe tobacco, to be very sweet and to have lots of flavor, it’s a bit faint. Basically what i’m feeling while smoking this pipe is like instead of smoking a cigarette I’m smoking a cigarette in a pipe. I don’t know how to explain, but it’s very similar in taste. Yeah, you can smoke it in a pipe but it’s not gonna be like a real pipe tobacco. You won’t have the same experience with real straight virginia for pipe tobacco. This is a tobacco that is a bit more rough and not so sweet.

I must agree again with our friend “Telling it how it is” that it has a “sweetish and honey of virginias”, it has some honey taste but at the same time it tastes like cigarette tobacco, and cigarette tobacco usually have burley, and this would be something between virginia and burley, a VaBur, but with more virginia than burley.

It tastes nice, it’s an interesting tobacco, but I don’t know if I would really really recommend it because I don’t think it’s for anyone. In strength for example I find it medium or over medium because somehow you can feel the nicotine in it. I think it has a good nicotine level for a pipe tobacco.

It doesn’t bite, it doesn’t have a hot smoke but the bowl was getting hot so I had to put it away for a few minutes. Probably because I’m not very experienced in smoking straight virginia.

Flavoring, there is none. There is no casing, it’s just natural flavoring of real tobacco that has some honey flavour but I don’t think it has flavoring in it.

For the taste I would say it’s medium or over medium.

And the room note is pleasant, tolerable to pleasant. For a smoker of both cigarettes and pipes it’s pleasant, it’s a combination of pipe tobacco with cigarette tobacco but this is sweeter so it’s a bit more pleasant than you would have from Marlboro or Camel so I would say the room note is tolerable to pleasant for those who don’t smoke pipes or don’t smoke cigarettes, and I would say it’s pleasant for those who smoke pipes AND cigarettes

For the rolled cigarette:

Well, first of all I have to say that I’m a heavy cigarette smoker. I smoke about 2 packs a day, and been smoking for about 18-19 years. Since 2005 to present I’ve only smoked strong cigarettes like Marlboro Red, L&M red and recently Camel, and I’ve had several attempts with rolled tobacco like Stanley Amber Virginia and Bali Shag Authentic.

So, it’s not strong, but it’s ok for the taste. So for me, this wouldn’t be the cigarette tobacco that I would be after. Maybe people who like milder cigarettes would enjoy it more.