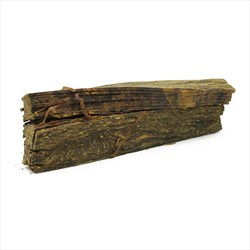 Notes: From GQ Tobaccos' web site: After a number of conversations at the Nottingham pipe club, we have decided to have Gawith Hoggarth make us some interesting new flakes. While there are a few vanilla flakes out there at the moment, most tend to be fairly golden Virginia & burley blends, and we wanted something a little richer. With Gawith & Hoggarth's Brown Flake being a staple for thousands of smokers around the world, it seemed the obvious choice to go for. So what began life as this classic blend of the high quality Virginias with a little burley. The selection of Virginias makes for a cool and smooth smoke, while the burley adds a little more body.

The use of natural vanilla extracts and simple sugars makes for a tobacco which smells good enough to eat. As soon as you open the bag, you are greeted with what reminds us all of vanilla fudge, but of course its how it smokes that matters. As with all of Gawith & Hoggarth's flavourings, the flavour comes through well, and last throughout the bowl. The sweet and highly aromatic vanilla taste combines stunningly with the nutty and tasty flake.

This is one of the finest vanilla flakes I've tried. Everything is a pleasure with it; there's nothing not to love!

The first great aspect is the bags aroma. This has to be one of, if not THE, strongest smells of vanilla I've had from a blend; I doubt there's anyone who's mouth wouldn't start watering from it! The flakes are just a bit lighter in colour than medium brown, not like Orlik Golden Sliced, not that bright, just slightly above medium.

The pouch note's good and the smoke's even better. It has pretty much every quality I want from a vanilla aro'. Firstly, getting it lit is very easy and as soon as it's going the taste is euphoric! Again, it has a very formidable vanilla flavour, it's really creamy. The next delicious quality is the thickness of the smoke, I can almost feel it swooshing around my mouth! This has quite a decent amount of nicotine to it, it's not strong but a bit more than medium. When I lit my second bowl I noticed that the vanilla is much stronger for the first few puffs, it doesn't die down to zero but it's a little over the top whilst steadying the burn! That's NOT a bad thing though, once the burn's settled it becomes a perfect strength. The room note is scrumptious, unlike some vanilla blends where you can only smell tobacco, this has a lovely vanilla quality to it.

Brown Flake Vanilla is new to America. Unlike StevieB’s experience, (one of my favorite reviewers BTW), the scent in the bag wasn’t very promising. It smelled of frosting, rather than vanilla. But, I love GH blends so I knew better than to quit there. Too moist to smoke right away I needed to let it dry for some time. I find that the drier the better with this blend. Those that enjoy only American style vanilla aromatics should be forewarned, BFV is not a similar blend! The brown Virginias are of the typical African GH variety and they smoke cool without a lot of sweetness. There is quite a bit of added flavoring, and it isn’t a natural vanilla taste although my limited understanding of the UK tobacco laws lead me to believe otherwise as I think it is natural. I really enjoyed this flake. It was cool burning, and offered more nicotine strength than would be typically found in a vanilla aromatic. The vanilla, while heavily added doesn’t completely crowd out the Virginia and it is pretty straightforward without much, if any complexity. Slightly earthy and sweet, I expect this to cellar very well. It’s not quite a four star blend for me now, but I really think that it will be an amazing aromatic after some time in the cellar.

Last of the 1 oz samples given to me by a friend. Thanks, friend! This one looked like regular G&H Brown Flake but had the Lakeland scenting in the bag. I barely smelled any vanilla. It was very faint. The Lakeland scent was more noticeable.

More Lakeland than vanilla in the taste as well, although the room note gave off a bit more vanilla. I would hesitate to call this a vanilla flake but it certainly had more of a sweet flavor than regular Brown Flake. It was easier to smoke as well. Still slightly over-anxious in its presentation, but the flavoring helped to balance the Virginia and burley more. I didn't find much in the way of complexity but like most of the G&H aros, it shows what can be accomplished when the flavoring doesn't strangle the tobacco. This is a tobacco blend with flavoring rather than a flavored blend with a little tobacco. In fact, a little extra vanilla would do this no harm. Pretty good nic hit from this one as well, if that's important to you. I don't think I'll buy any but I enjoyed smoking it. Recommended for the smokers that find Brown Flake tasty but pushy and want it toned down a bit (and that don't mind the Lakeland essence). Good stuff!

Gawith, Hoggarth and Co. make some of the finest tobaccos in the world, and Brown Flake Vanilla is among these.

The flakes are beautiful, uniform and large. Imagine a strip of top-shelf thick sliced bacon in size. The flakes are firm without being leathery or tough. For this review, I first rubbed out about a half flake to nearly a ribbon cut appearance. This was packed very loosely into one of my largest bowls, a Missouri Meerschaum Freehand. The remaining half flake was folded and jammed unceremoniously into the top half of the bowl. Thus, the tobacco below acted as tinder and kindling for the serious wood above it. I should mention that I allowed both the rubbed out tobacco and whole flake to dry for nearly an hour at 38% relative humidity before packing it into my pipe.

Two charring lights were required, as I failed to draw the fire completely down into the bowl on first lighting. After a very gentle tamping, a brief touch of flame to tobacco got the party started. Three total relights were required to reach the bottom quarter of the bowl, by which time I was suffering a mild nicotine overdose and had to put down the pipe for awhile. With deliberately slow puffing, this tobacco burned very cleanly to the unfinished remnants. Hard puffing resulted in a fairly nasty tongue bite, probably from whatever Virginias are included in the flake. Otherwise, the tobacco smoked cool and clean.

Aromas: While the famed "Lakeland Essence" was nearly absent in the pouch note, it comes through at a moderate level in the smoke. Vanilla? What vanilla? The little vanilla included in the recipe is there in a supporting role, nearly a cameo or walk-on appearance. The vanilla note is noticeable only during the first third of the bowlful and is largely eclipsed by the Lakeland and natural tobacco aromas. Mrs. Squinty found the room note to be barely tolerable, but I thought it pleasant.

Nicotine: Mother of God! Not as potent as some of the brown ropes and twists I've smoked, notabley Happy Brown Bogey...but it is still an arse-kicker and not for the weak of stomach or intolerant of Vitamin N. On a ten point scale where 1 equals nearly no nicotine and 10 equals "Call 911, I'm having a heart attack," this tobacco rates a solid 8. I had to set down the pipe frequently during my smoke and abandoned the pipe after smoking it down to the final quarter bowl. After a solid meal and with a glass of something to drink in hand, the nicotine is manageable. BTW, I was a pack a day Marlboro 100's smoker before taking up the pipe; nicotine is my friend. This stuff nearly dropped me to my knees.

Mechanically, this tobacco is about as good as flake tobacco can get. With a bit of drying time and careful packing, this will behave very well in your pipe. This is wonderful in large bowl cobbs, but I imagine it would also be stellar in a large briar, preferably one with a longer stem. Recommended for experienced pipers. Not for use on an empty stomach.

Purchased From: Online retailer and sponsor of this site.

Not an exceptional smoke, but a very solid one. The usual flavors of a GH VaBur flake with a mild hit of vanilla. It has just a slight touch of Lakeland floral toward the end of each bowl. Has some strength to it and it's very satisfying. I've smoked it in briar, cob, and clay with some minor differences.

Briar (Ropp Dublin) - Compared to the clay and the cob the natural flavors and the strength of the vanilla are smack dab in the middle. I'd classify the vanilla as mild. A little bit creamy.

Clay (Dutch Gouda) - A little less natural flavor and a touch more vanilla. Vanilla at mild to medium. A smoother smoke here as well with the creamiest texture of the three. My preferred pipe for this flake.

Medium in body and taste. Strength of flavoring varies according to pipe. I'm gonna rate this as mild. It may have been milder due to the fact that I like this very dry. Does need drying time and burns very well.

Since the Brown Flake Unscented is one of my favorites, and I really enjoy the Scented/Aromatic version, I had to give this a try (see my reviews for those for the underlying tobaccos). This isn't overly sweet nor is the vanilla overwhelming in any sense, but the flavor carries through the entire well. It lights easily, smokes slowly. I'm not really a huge vanilla-flavored tobacco fan any more, but this is really a first-rate blend for me.

Age When Smoked: opened on delivery

New to the USA, this is plain Vanilla, not Vanilla Cavendish in the American aro style. My sample was not that strong in topping and the Vanilla flavor seemed to be at the right level to compliment the smoke and create a good room note at the same time.

I just found the combination unexciting. In pure aromatic terms, there are more interesting American style Cavendish blends out there, even if they use inferior base tobaccos. In the tobacco sense, this is typical high quality, smooth but monochromatic G&H.

But the result is kind of...vanilla...in the negative sense of the word. I think the complex, floral, soapy toppings G&H normally uses are more interesting and somehow enhance these types of monochromatic African grown tobaccos.

I'm sure some people will disagree with me and find this a perfect blend. However, I prefer the more standard G&H stuff, like Rum Flake etc.

I thought this was a little on the boring side. I really did not taste the Vanilla. The tobacco was pleasant to smoke and behaved nicely. The room note was very nice and most will like the aroma. I'll age the rest and see what happens down the road.